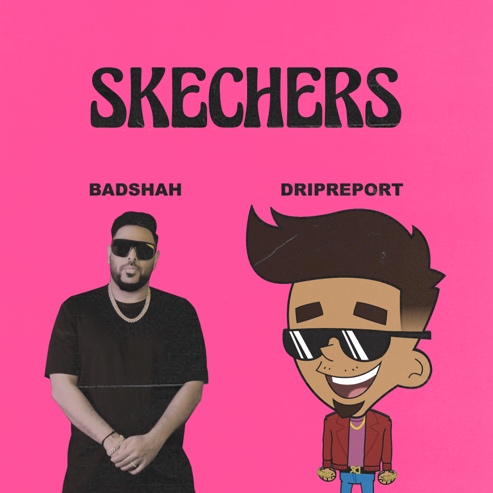 Badshah’s recent hits include ‘DJ Waley Babu’, ‘Kar Gayi Chull’, ‘Paagal’ and ‘Genda Phool’. The Indian music icon is riding high on the success of his last hit, the aforementioned Genda Phool, which has crossed 300 million views and was a #1 video on the YouTube Global Top Music Videos Chart.

Talking about the song, Badshah said, “I loved Skechers from the very first time I heard it, and I’m thrilled to have given it my own twist. I’m really excited about releasing this song internationally and working with Arista for the first time. I can’t wait for everyone to hear it. Light up!”

DripReport has ignited a grassroots global phenomenon with his viral hit single “Skechers.” Combining the influence of India, South Asia and America along with popular internet culture, DripReport is carving out a new lane within music and social media. Building a cult following by creating remixes of popular American hit records, DripReport accumulated hundreds of millions of views across his YouTube and social platforms.

Tyga first performed the original version of “Skechers” on TikTok and then posted a follow-up video of himself riffing over the top of the song. This led to the exciting collaboration between these two artists and remix of the hit track.

“Skechers” is trending worldwide with 300 million streams across all digital platforms. The track is the longest-running #1 Viral song in Spotify history and has spent 5 consecutive weeks on the Global Top 50. It also hit #1 on Shazam’s US Discovery Chart.

In India, the song has been a Top 3 hit on all streaming platforms. “Skechers” exploded on TikTok with more than 3M videos and counting, many of which showcase the Bollywood dance Bhangra featured in the official music video, which has over 84 million views on YouTube.

Let us know what you think of the remix over on @CelebMix!