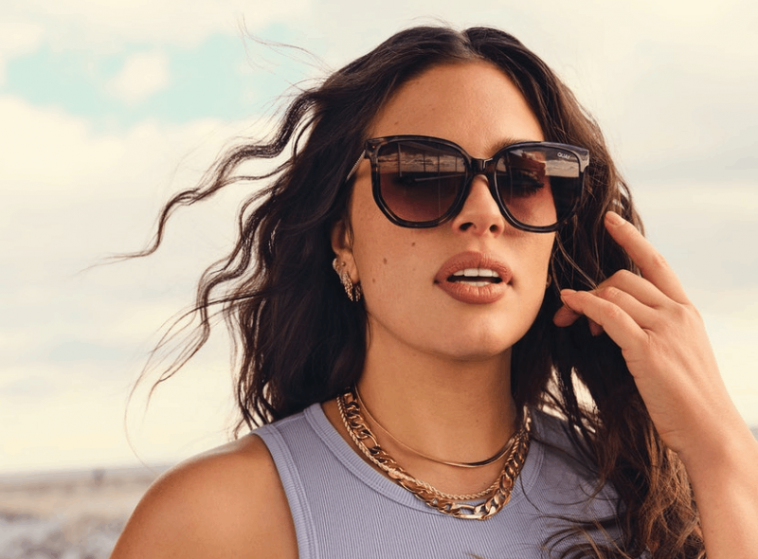 American model and TV personality Ashley Graham recently announced a thrilling partnership with glasses brand Quay International. The new Ashley Graham collection of glasses features a selection of spring sunglasses and blue light glasses, all of which have a bright, floral theme.

It’s clear that Graham chose this glasses company for the collaboration specifically to celebrate female empowerment, especially as the announcement came in time for International Women’s Day. Graham, known as one of this generation’s most prominent body-positivity icons, says that the collaboration is all about supporting women.

It’s a perfect extension of Graham’s personal brand – she’s a devout believer in celebrating your style no matter what size or shape you are.

“This campaign is all about celebrating confidence, embracing self-expression, and empowering women to own who they are,” she told POPSUGAR, “with a special focus on creating change and impact in our local communities.” To commemorate the collaboration, Quay is donating $100,000 to Girls, Inc., an organization that helps girls become leaders.

The collection that Graham and Quay designed speaks to that priority, as well. “We opted for bright, colorful designs and luxe details which make these the perfect accessory for spring,” Graham explained. People looking for the perfect pair of glasses to accessorize will be able to choose a bold, stunning pair that fits form and functional needs.

Graham is not the first celebrity to choose eyeglasses for a collaboration, or even to partner with Quay. Rapper Saweetie also dropped a collection with Quay recently, while Millie Bobby Brown of Stranger Things fame worked on a recent collection with Vogue Eyewear.

The celebrity endorsements make sense – everyone will choose to wear glasses at some point in their lives, either for prescription reasons, to protect from harmful blue light, or just to shade their eyes from the sun. But beyond that, celebrities in particular are known for picking a style of glasses and sticking to it, making the accessory part of their signature look.

Most folks make sure they pick a style of frames that suits them, but people in the public eye like Graham often take it one step further. That’s why so many celebrities choose eyeglasses as brand collaboration projects – they’re a fun, easy way to accessorize and extend personality beyond an outfit.

For celebrities, being recognized and developing their look is critical for recognition and success. Then they can extend that look with brands like Warby Parker or Quay so fans can build that sense of connection with their idols.

It’s interesting to note a particular juxtaposition with how celebrities choose to wear glasses. While many celebs clearly are happy to collaborate and wear eye-catching glasses, most opt not to do so when they’re in the public eye unless it’s specifically for a collaboration, which leads to a pervasive idea that celebrities all have 20/20 vision.

Many people are surprised to learn that singer Halsey, for example, wears glasses – so much so that it’s considered a type of news item. One article headline reads, “Halsey Reveals She Wears Glasses,” as though it’s a major shock or revelation that a celebrity might need corrected vision.

Yet that’s an image celebrities seem to cultivate. Famous people don’t necessarily hide the fact from the public – many tabloids make their living by selling grainy images of movie stars without makeup, walking their dogs in sweats, slippers and glasses – but they don’t flaunt it, either. Part of the issue is the media framing (if you’ll excuse the pun) every single fact about celebrity lifestyles as a grand reveal, but part of it is that celebrities still clearly believe glasses are a flaw to be at least somewhat concealed, rather than an accessory or even something normal everyone has, like hair or shoes.

While style icons like Iris Apfel have long been known for their dramatic eyeglasses, most celebs choose sunglasses and other accessories to stand out instead. Perhaps this new era of media-friendly collaborations, with influencers like body-positivity movement’s Ashley Graham celebrating every look and style, signifies a shift.

As more people believe that to be flawed is normal – even beautiful – perhaps more celebrities will follow suit and begin to flaunt their eyeglasses.