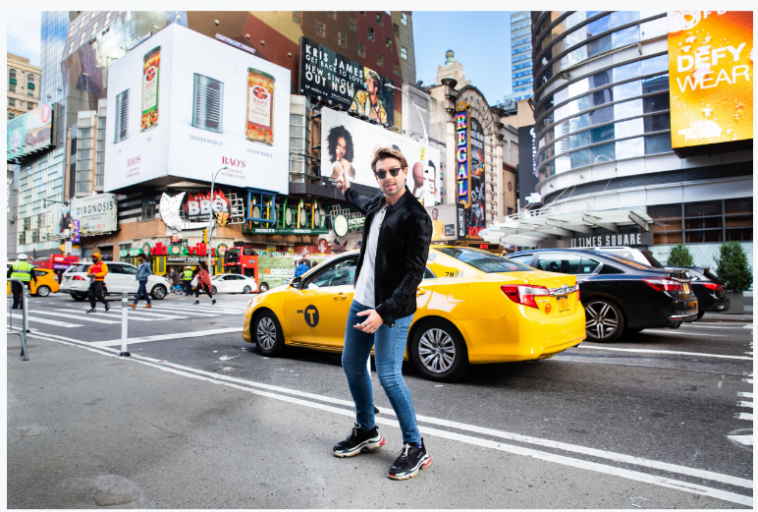 The new year is a time for re-prioritising, resetting and taking stock of what we can improve and work on over the next twelve months. Kris James is here to remind us what the most important thing should be – love.

His latest track, ‘Get Back to Love’ is a departure from his usual sound, forgoing emotionally-charged lyrics in favour of a fun and funky disco-inspired beat and standout bassline. Not to say that his previous releases were without their own success – debut single ‘Eyes Open’ peaked at #25 on the iTunes chart and followers ‘I’ll Be Here’ and ‘Anymore’ all broke their way into the top forty.

But that wasn’t it for our Kris, no – he had his sights set a little further than the charts.

Every musician dreams of one day having their face plastered up on a Billboard in Times Square. Few actually achieve it. Kris James is one of these few. That’s right, as of last month, Kris James’s face has been gracing a much-coveted billboard in the world-famous Times Square. James posted about this milestone on Facebook, saying that “as a little boy growing up I always used to look up to the Times Square Billboards hoping that one day my music might be up there! Today that dream came true!!! Don’t give up on your dreams guys.”

Inspirational yet humble messages such as this one are at the core of who Kris James is. Never forgetting where he comes from, James aims to use his music to spread messages about healthy relationships, reveling in the glory of love and spreading positivity, as we can see in his fun-filled music video for this upbeat track.

With successes like this under his belt and the promise of new music coming later this year – did someone say debut album? – 2020 is surely set to be a massive year for Kris James!

Watch the sun-soaked video for ‘Get Back to Love’ down below and join in the conversation on Twitter @CelebMix!