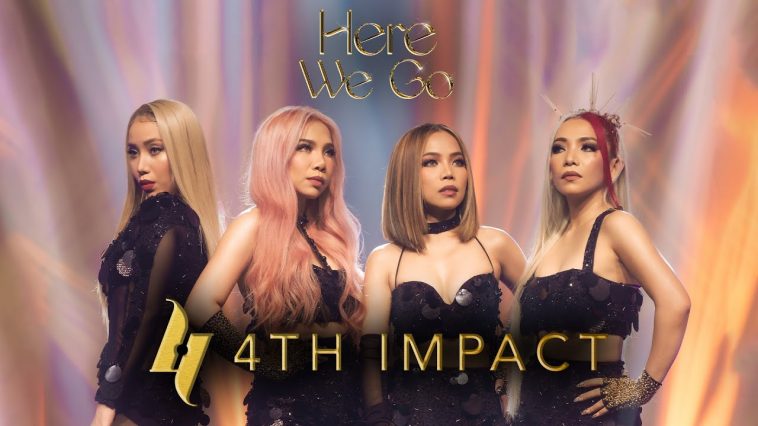 We’ve waited ages for 4th Impact to reach the success that they deserve, and it’s clear that this is the important founding step in the start of their soon-to-be incredible career with the drop of their single and music video “Here We Go”, which has been released under their new recording contract with Sony Music Philippines. This follows up their dance remix of single “K(NO)W MORE” and their 2021 single “Dance With Me”.

4th Impact are best known for being contestants on the shows Superstar K6 and The X Factor. In the former, they were on the sixth season, and they came in eighth place. As for the latter, they competed in the twelfth series and finished in fifth place; their audition tape, though, is The X Factor UK‘s most viewed video on its YouTube Channel with over 100 million views. The group consists of sisters Almira Cercado, Irene Cercado, Mylene Cercado, and Celina Cercado. They’ve been working hard on their career the last few years, dropping the awesome positive debut single “Unleash The Diva“, following that up with the ballad “It’s Not The Same Anymore“, before working with Tony Valor on the tracks “D’ Nah Nah (Shaky Bum Bum)” and “Take My Breath Away“. As independent artists, they dropped their debut independent single “K(NO)W MORE” in March 2020, launched a Patreon page where they frequently keep in touch with their fans alongside live videos and regular covers, and they’ve started work on their debut album! Now, they’ve signed with ShowBT Entertainment and Sony Music Philippines which boasts a large roster of artists including the likes of Ben&Ben, of Mercury, Alex Bruce, The Vowels They Orbit, KAIA, and internationally known boyband SB19 – who 4th Impact supported as part of an online concert.

This song has been written by Almira Cercado, Celina Cercado, Irene Cercado, Mylene Cercado, Choi YoungHo (Handsome People), and Dizzy Sunn. As for the music video, that has been directed by Jed Regala with Macky Quiobe acting as Choreographer. With a brand new logo, new record label, higher production, and a much bigger budget, 4th Impact have finally got the funding they’ve deserved, now it’s time to conquer the world! They blew us away on Superstar K6, blew the roof off of Wembley Arena at their audition at The X Factor, shocked us completely with their awesome debut single “Unleash The Diva” full of female empowerment, took us out of this world with their independent single “K(NO)W More“, and just when we didn’t think they could release anything that could top that, they drop this awesome new single and music video, blowing us out of the stratosphere with “Here We Go”. We can’t cope with this level of extraordinary when it comes to these talented sisters, so although we say we’re ready for their debut album, we know it’s going to be the best thing we’ve ever heard and will certainly blow us out of the entire universe – we cannot wait!

Watch The Music Video To “Here We Go” By 4th Impact:

If anything, this is Pinoy-Pop (P-Pop) at its finest, yet glammed up the 4th Impact way, bringing their iconic signature sound, amazing versatility, and incredible capability to this genre whilst dipping into the likes of pop, dance, rap, hip-hop, and soul. 4th Impact harmonises like no other group we know, whilst also dancing the hell out of any song and giving us chills all over, but this song has just conquered all our expectations and more. Asian pop has certainly hit the global stage in recent years with J-Pop and K-Pop making an impact and even charting globally, and we’re sure 4th Impact are on the forefront of making P-Pop the next worldwide success. We’ve said this again and again, but 4th Impact’s range is totally on fire throughout this song, showing exactly what they can do with their voices while also treating us to incredible harmonies. All four sisters have a shining moment throughout the song, with Mylene opening on the solos bringing vocal strength, Irene follows with blazing runs, then Celine showcases why she’s the rapper of the group switching the song up and surprising us all, then Almira mellows it all out with her gorgeous upper tone, all of that melds together for an energetic harmonisation chorus that’s beyond catchy and will have you singing along by the end of it. Lyrically, the four women are taking a stance and they are here to stay, slay, and finally get the career they deserve; hard work seriously does pay off and 4th Impact are the epitome of working hard to make their dreams come true. The track has lyrics in both English and Filipino, with English subtitles since the sisters know they have many international fans, and we love hearing them sing in both languages. If you’re not playing this song on repeat then you are certainly missing out.

The music video is mainly a performance visual with the four sisters showcasing their amazing vocals, harmonies, and runs, as well as their brilliant fashion sense – with all four of them looking absolutely stunning – and their incredible danceability. They also debut their brand new 4th Impact logo and concept (we actually hope that they add that flag to their merch store, as we’re sure we’re not the only ones who want that flag). During the solos, each of the members of 4th Impact represent the four different elements, with Mylene representing Earth, Irene representing Fire, Celina representing Air, and Almira representing Water. Our expectations of 4th Impact are always really high since they have bundles of talent, but the choreography is off the charts and the four sisters bring it perfectly, they’re totally in time and are up there with some of the top music dance groups from around the world. An incredible music video that we can’t stop watching again and again – we can’t wait to see what’s next for their careers.

“Here We Go” is available to download and stream right now, through Sony Music Philippines. The music video has hit 500,000 views in just five days! Look out for 4th Impact’s upcoming performances, we expect them to promote this track a tonne, infact we wouldn’t be surprised if they sing the song on Wish Bus. If you wish to support this amazing girl group, we suggest you sign up for their Patreon page and if you’re interested in buying a signed CD of “Here We Go” along with a bundle of other merch to go with it, head to their website – signed CDs are only available until 8th April, so get them while you can.

What do you make of the new single from 4th Impact titled “Here We Go”? Let us know on Twitter @CelebMix.