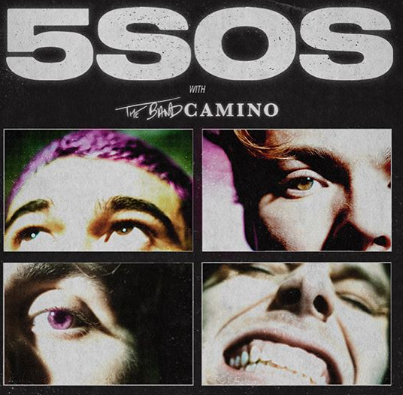 Since 2019 we’ve known 5 Seconds Of Summer will be back on tour in 2020!
After the tour dates for the European concert leg were released all the fans outside Europe were waiting impatiently for the next big announcement!

As far as the dates and venues are announced, the concerts will take place in similar-sized venues like the Meet You There tour back in 2018.

The leg is going to start off on August 12th in New Mexico and the last show will take place on September 26th, 2020 in Concord, California.
With the announcement of the tour dates, we also know who their support act is going to be: The Band Camino.

The tickets will be available on Ticketmaster and on the band’s homepage on Friday, 7th of February 2020.

The biggest treat for all the fans ordering the tickets via the 5SOSwebsite has to be: The tickets will be delivered with a copy of the boys‘ 4th studio album!
The anticipation to finally get out hands on the new album is getting bigger and bigger, but there seems to be light at the end of the tunnel!

On the same day, the North American tour dates were released, four short clips with a snipped of a new song and behind the scenes footage were released on Calum’s, Ashton’s, Luke’s and Michael’s Instagram and Twitter accounts.

The end of the clip showing the 1st letter of each band member’s first name, ending up spelling the word CALM.

Get in touch via Twitter and let us know which concert is going to be the one you want or will see 5 Seconds Of Summer this year live on stage!