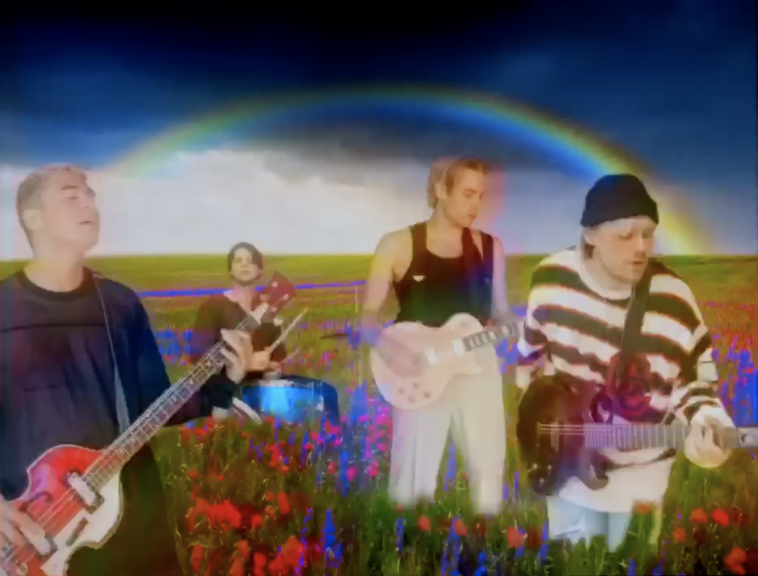 Despite the current lockdown conditions due to the COVID-19 global pandemic, that hasn’t stopped 5 Seconds of Summer from releasing a psychedelic visual for their latest track ‘Wildflower’.

Directed remotely by Andy DeLuca and assistant direct Sarah Eiseman, an official visual for ‘Wildflower’ was always on the cards, however, the original plan for a shoot in a studio had to be aborted due to lockdown restrictions.

Using their imagination, the visual was later shot entirely on green screen through a meticulously arranged process that involved transporting the disinfected green screen to each band member’s doorway in order to film their individual parts as they are quarantining separately.

The result is a lo-fi 90s style visual which perfectly captures the vibe of the song. It’s an incredible video which not only delivers the feeling of togetherness (despite Calum, Ashton, Luke and Michael filming their parts individually), but is also filled with nostalgia of a time gone by.

Speaking on the new video, Calum said “Wildflower was the wildcard of the album. A song that has opened new avenues for this band to explore. Most importantly it just feels good to listen to and disconnect for a minute. We really feel this video reflects that too and hope you all enjoy!”

On directing the video, Andy Deluca added “Our original plan consisted of a big budget, a full crew, and a giant studio, but it was cancelled due to coronavirus and we were forced to make something under the challenging conditions of quarantine. Michael had a green screen sitting in his closet, so I figured that could be enough to make something.

“Since the song has a pretty distinct 80s/90s tone, I came up with the idea of making an 80’s/90’s MTV-style music video. A ‘music-video-themed music video’. The stuff I grew up on and loved. So we passed around the disinfected green screen (with the help of our teammate Kat Gallagher), and everyone filmed their parts at home with an iPhone and later sent the footage over to me.

“In the meantime, Sarah Eiseman and I began working on the art for the video. We quickly learned animation and drew up several blooming flowers, and also created the trippy colored backgrounds using milk and food dye. I then spent the next couple of days/nights editing nonstop until my eyes bled and the video was completed. It definitely has pushed us to create something  we normally wouldn’t, using only our brains and our hands.”

‘Wildflower’ is taken from 5 Seconds of Summer’s latest album CALM, which went to number one in both the UK and Australia. The band had previously unveiled a lyric video for the track which was created using 358 different photos and 529 flowers, along with over 10 hours of stop motion animation and eight hours of editing.

What do you think of the official music video for ‘Wildflower’? Let us know your thoughts on 5 Seconds of Summer and their trippy new visual on Twitter @CelebMix