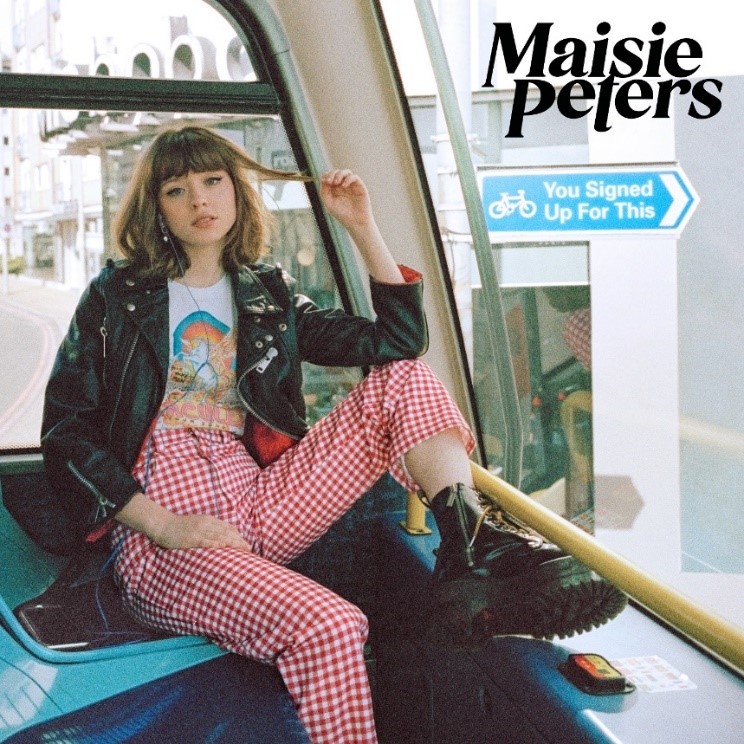 It’s been a long time coming but singer-songwriter Maisie Peters has finally released her highly anticipated debut album You Signed Up For This.

The 14-track record is a captivating and cohesive offering which is a diary-style ode to growing up. A true coming of age album, we live vicariously through Maisie’s experiences of heartache, unrequited love, fantasy revenge, sad rage, sisterly love and being an absolute icon of the feral girl summer movement.

The album opens with the thrilling title track which almost tells you everything you need to know about Maisie in just three minutes.

I am 20 and probably upset right now
I still haven’t got my driver’s licence
And I am sorry to make it about myself again
But you, you signed up for this

‘You Signed Up For This’

Whilst the songstress is now 21 and has since passed her driving test, the track captures the beginning of Maisie’s journey on this album and is a charming and witty introduction to what we’re all signing up for on this record.

One of the things which Maisie does best is encapsulate real life situations and moments. On ‘Brooklyn’, she recalls a memorable trip to New York with her twin sister Ellen which makes you feel as if you’re part of the girl gang. Not only does the song deliver an exact chronology of what happened on the trip (shoutout to Katie from Michigan for the fake ID), but it also features the most gorgeous post-chorus which captures Maisie and Ellen’s unbreakable bond.

If you want to take her out, you’re gonna have to ask me first
Come on, have you seen those eyes?
It’s nothing but the best for her

Whilst ‘Brooklyn’ is a retelling of real life events, ‘Outdoor Pool’ adds a little fiction to proceedings but still results in a heartbreaking mid-tempo ballad of unrequited love. Referencing British staples such as Skins and HMV, Maisie might not have actually kissed her crush in an outdoor pool but the track will resonate with anyone who’s ever experienced young love. Similarly, ‘John Hughes Movie’ echoes the pain of unrequited love along with the danger of romanticisation.

As well as tales of unrequited love, Maisie touches upon the different emotions of love and heartache. From channeling chaotic and passive aggressive feelings on the humorous ‘I’m Trying (Not Friends)’, reminiscing about old times on ‘Elvis Song’ to accepting the end of a relationship on ‘Love Him I Don’t’, the singer-songwriter delivers a pop masterclass in songwriting and wears her heart on her sleeve throughout the album.

Three shots, lemon drops
One for being lost and alone in your early twenties
One for being obsessed with someone who puts you secondary
One for calling guys with guitars in a cemetery
Just me? Okay!
If I’m being frank, I want a “sorry” but I’ll settle for a handshake
‘Cause I’m a baby but I’m gonna be the bigger man, babe
So many blank slates I could build a whole fucking house

A personal highlight for us is the intoxicating ‘Villain’. An instantly iconic sad rage song, Maisie delivers scathingly tongue-in-cheek lyrics in a delicately sweet manner as she realises that for once, maybe she is the villain in the story. It also features what we consider to be one of the most memorable choruses throughout the entire album.

Now you’re in her room, getting undressed
I curse you on the front of the steps
I’ll burn this house, I mean it
If she’s the girl of your dreams
The best thing you’ve ever seen
Well, what does that make me then?
I’m your villain

‘Volcano’ also features more hard hitting lyrics as she quietly lashes out at those people that never seem to see the consequences of their actions. The singer-songwriter expertly channels her anger through honest lyrics yet once again delivers them in the most calming manner, which is a skill in itself.

‘Talking To Strangers’ is another favourite of ours and showcases Maisie’s effortlessly ethereal vocals. The track is a love song at heart however, everyone has at least one person that they’ll think of whilst listening to this track, whether it’s a partner or a friend. Sonically, ‘Talking To Strangers’ also pays homage to Maisie’s country-pop roots and could easily be a younger sibling to her Dressed Too Nice for a Jacket EP.

You Signed Up For This has been released via Ed Sheeran’s Gingerbread Man Records and he also co-wrote three of the tracks with Maisie: ‘Boy’, ‘Psycho’ and ‘Hollow’. All three are very different sonically, therefore allowing Maisie to experiment with her sound. Whilst Ed’s influence is quite clear to hear on these particular tracks, at the heart of it all they’re just unapologetically Maisie.

‘Psycho’ is the ultimate feral girl anthem and features clever wordplay which allows you to look at the lyrics in two different ways. ‘Boy’ is probably one of the most diverse songs on the album, channelling a slick 90’s R&B inspired sound, whilst ‘Hollow’ presents itself as the most heartbreaking song in Maisie’s discography. With lyrics including “The casualty of love is the price of being free” and “You’re the one that got away and you got away with a lot”, this is the ultimate sad girl ballad and will have you crying over a lost love.

The album ends with ‘Tough Act’ and exquisitely wraps up the album and Maisie’s journey so far. Packed with mature lyrics, the track shows that she has grown as a person from her experiences and that sometimes you just need to move on from certain relationships in your life. Finishing with “You are one tough act to follow”, Maisie certainly sets the tone for her future albums.

There is no doubt that on the surface (and first listen), You Signed Up For This is a fantastic debut album. However, if you take the time to enjoy several listens then you’ll truly get to appreciate just how clever a lyricist Maisie is. She has an incredible knack for turning everyday situations into the most compelling and enchanting stories – so much so that it’s hard not to be sucked into her teenage dream.

A vivid and emotive storyteller, Maisie has combined her raw, vulnerable, relatable and occasionally damn right sassy lyrics with earworm melodies and a glistening pop production to create the genius record that is You Signed Up For This. It’s safe to say that this is Maisie Peters’ world and we are fully living in it.

You Signed Up For This is available to download and stream now. You can also check out our interview with Maisie Peters here.