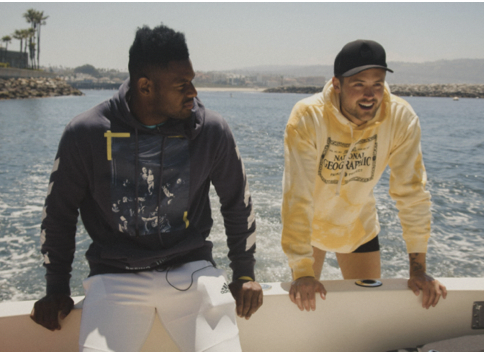 Dylan’s Flow State series is a collaboration with Firestone Walker. Dylan and his family grew up on the Central Coast of California, just 30 miles from the first Firestone Walker Brewing Company location. Firestone has been Dylan’s beer of choice since he was old enough to drink one. But beyond an affinity for beer, Firestone and Dylan share a spirit of adventure and a commitment to exploration. This shared ethos and friendship naturally led to spitballing ideas over a few beers, and Flow State was born.

In the latest episode Dylan takes Pittsburgh Steelers star JuJu Smith-Schuster off the football field and under water for spearfishing lessons. Setting sail from Redondo Beach, the two learn breathing techniques and using their spear gun for the dive with expert Clark McNulty. See how these two handle being out of their element and how many fish they can catch in the deep blue sea.

You can view all the episodes in the series so far on Dylan’s Youtube channel. Let us know what you think of the latest episode of Flow State featuring JuJu Smith-Schuster on @CelebMix!