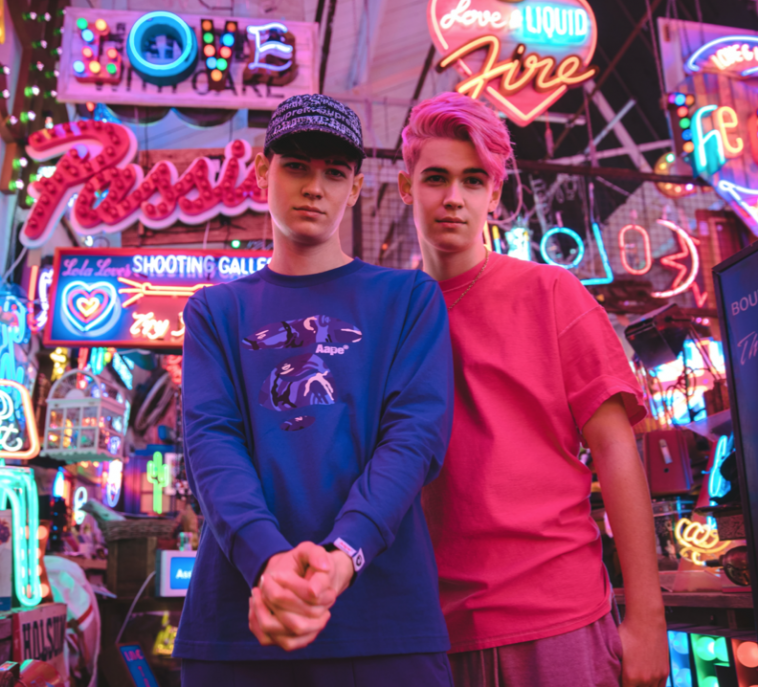 Whether it be TV presenters, podcast hosts, or TikTok stars, Max & Harvey have done it all. Today they return to where it all started with new single ‘Worry A Little Less’.

With all their exploits, you’d be forgiven for not realising that Max & Harvey have gone nearly 15 months without releasing a new track. In that time, they’ve seen CBBC show FOMO go from strength to strength, finished second on 2019’s The X Factor: Celebrity and recently launched their own Spotify podcast School Daze.

On ‘Worry A Little Less’, the twins find a confident new sound and a poignant message in keeping on keeping on.

“We’ve gained much more experience over the past two years and we’re able to write about things like that,” Harvey reflects, referencing the unpredictable ongoings of 2020.

“We’re still going to be learning and working with writers to help develop our sound but it is really exciting.”

Not only has being locked down in 2020 been fruitful in producing ‘Worry A Little Less’ – and Max & Harvey promise there are plenty more tracks ready and raring to go – but it’s given the busybody brothers chance to hone in on new skills.

“I fully built a functioning studio in my bedroom,” Max remembers. “I researched all the equipment and got it set up. That’s where we recorded all the songs we are releasing over the next few months.”

“And I took up pranking my little sister,” Harvey jokes. Although, when not winding up his siblings for viral TikTok views, the singer began to perfect the drums too.

“I bought my first proper electric drum kit and really worked on getting better at that. I hope one day we can incorporate that into our set.”

Although, it wasn’t all productivity and laughs. At one point, during a getaway to France, Max suffered from appendicitis. He documented his treatment and recovery online to make light of a tricky situation which he admits changed his outlook.

“I’ve not said this much but at one point I did get told I had 24 hours to live,” Max admits. “I was sat in a bed in France thinking what have I done with my life.. have I done enough?”

“Luckily I can do more now,” he says looking ahead to 2021 and what it may hold.

Questioning whether they are doing enough whilst juggling what seems to be a million projects is a credit to the entrepreneurial attitude that has deservedly earned the duo over a million online followers.

Those followers came out in their masses earlier this year to see Max & Harvey on their biggest-ever and sold-out U.K. tour. CelebMix were lucky enough to catch their stop off in Newcastle.

“I genuinely don’t think we could’ve got the tour any closer [to lockdown],” Max says. “It was really weird to go from meeting loads of fans and having such a good time to everything shutting down.”

“We were possibly one of the very last U.K. tours that happened before lockdown so we were so chuffed to be able to do it.”

Ready for more, ‘Worry A Little Less’ arrives today with the announcement of more shows for August 2021, including a stop at London’s O2 Academy Islington. Tickets are on sale next Friday.

Another triumph that 2020 has brought Max & Harvey is the School Daze podcast on Spotify. The show sees the boys chat with guests about their school days with an equal mix of funny anecdotes and serious topics touching on the likes of mental health, bullying and disability.

“It’s really interesting how that came about,” Harvey tells. “Spotify were looking for some hosts for a new podcast and approached us. We were all for it because we love talking!”

“It’s probably the most defining time in everyone’s lives because it makes you who you are,” Max says. “The topics are so relatable and that’s why we chose it. We wanted to be able to talk to celebrities about something every single person has been through.”

Talking about Spotify, CelebMix can’t not ask about Spotify Wrapped, which has once again gripped the nation. Max & Harvey were quick to share their statistics online earlier this week. Max’s top artists included Jon Bellion and Lauv, whilst Harvey’s were the Glee Cast and sleep meditation.

“I was texting Kevin [McHale of Glee fame] about this,” Harvey chuckles. “I realised when I listen to original songs I think of the covers and end up listening to those.”

“The top songs are about 90% sleep meditation. I’d been playing those playlists when going to sleep not realising they’d all be on my Spotify Wrapped!”

Max credits Jon Bellion and Lauv making it to the top for their readiness to share behind-the-scenes stories of tracks on YouTube.

Perhaps without even realising, just as Max & Harvey are looking up to those big names topping their Spotify Wrapped, there are also tens of thousands of young pop fan looking up to them. ‘Worry A Little Less’ is a heartfelt single that will add even more weight to that.

Are you a Max & Harvey fan? Loving ‘Worry A Little Less’? Let us know @CelebMix on Twitter.