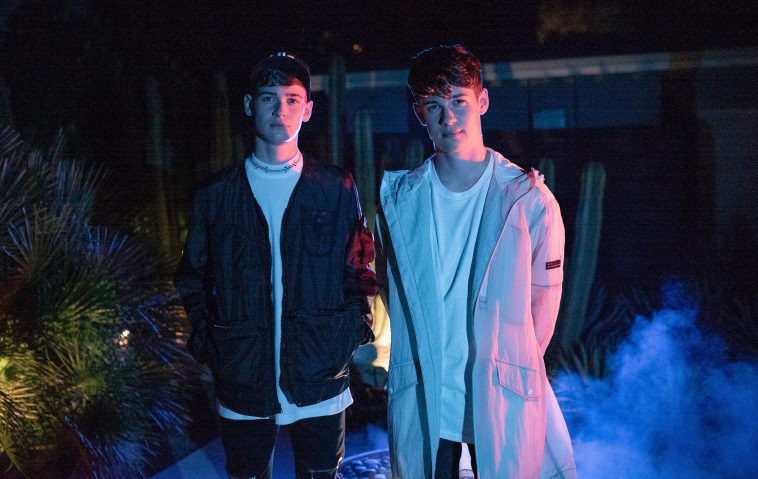 Music, TV, social media… Max & Harvey are the twins doing it all. They chat to CelebMix ahead of their sold-out Northumbria Institute show on the Don’t Be A Stranger Tour.

“The tour is incredible,” Max opens. “Being 17, it’s pretty mind-blowing for us that so many people want to see us… so much so that we run out of tickets to sell.”

The twins have just travelled down to Newcastle after the previous night’s show in Glasgow. Four sold-out gigs in five nights have come in the run-up to the set at Northumbria’s Institute, with one more night in Bristol left on Sunday. “It’s been hard on our voices. Our physical state is good which we need as we do put a lot of energy into our show,” Max admits.

The promise of energy is something the duo more than follow up on later that night. Opening on deep cut ‘One More Day in Love’, the venue’s floor is quaking and doesn’t stop until the set ends an hour later. Over the past few years, it’s that electricity between the twins that fans have bought into in their millions.

There’s no doubt that Friday’s night’s crowd has been bolstered by last year’s successful stint on The X Factor Celebrity, which saw the duo sing their way to second place. However, Max & Harvey’s rise has been a long-time coming.

“We’ve always been singing. Max started to learn the guitar around 8-years-old and that was the start,” Harvey remembers. “We’d just have him playing the guitar and I’d sing along and it all grew from there when we started posting online.”

Millions of fans flocked to follow the brothers as they branched out onto Musical.ly, posted covers online and eventually moved onto TikTok where they now boast an audience of close to six million – dream TikTok collaborations with James Corden and Lewis Capaldi firmly in their sights.

“We couldn’t quite get our heads around what was happening [gaining millions of followers]. Even now, we look at some of those videos which have 1.7 million views and you can’t put it into perspective. If you imagine that number of people in front of you, that’s just something that you never think would happen.”

“Because of social media people were watching from all over the world. We took that, we wanted to make music and we progressed the two together.”

Musically, Max & Harvey’s biggest moment to date came a year ago with the release of the Coming Soon EP. Featuring viral singles ‘Trade Hearts’ and ‘Where Were You’, the punchy pop flicks saw the duo cement their place as rising stars. That evening, it’s the tracks from that EP that make some of the night’s best moments. ‘Where Were You’ is dropped early on and met with a wall of sound, whilst ‘Nervous’ is a clear fan-favourite and ‘Trade Hearts’ makes up part of the finale.

“The EP took a long time to produce, hence Coming Soon. It eventually got released and we were so happy with it. It’s amazing to perform it still.”

The rest of the set is filled with covers from those high-profile X Factor shows. All of One Direction’s ‘Kiss You’, Jonas Brothers’ ‘Cool’ and Panic! at the Disco’s ‘High Hopes’ feature in a section dedicated to the talent show, as well as the golden buzzer-winning ‘Can’t Hold Us’. For anyone else, performing a string of such big-name covers back-to-back might be a risk, but re-imagined with their own personalities at the wheel, each cover could simply just be a Max & Harvey song.

“It helped launch us as artists, made our voices better and improved our confidence on stage too,” Max says of the twins’ time on The X Factor.

“We got an email about the show at first and thought it was just one of things that would be a long process and wouldn’t happen. Then someone explained the format and it sounded fun. We did the audition at Simon’s house and got through. Then we realised, this is really happening.”

“We watched it as kids, it was always on the TV. The regular show can make things a bit unnatural, but Celebrity was such a different format. It felt more like a group project than a TV show. It was fun from start to finish.”

Beating stars such as The Chase’s Jenny Ryan, Premier League footballer Vinnie Jones and Glee Star Kevin McHale, success on the show didn’t come without a battle. During the Newcastle show, Max & Harvey recall judge Nicole Scherzinger demanding a second song in ‘Sucker’ when the duo’s first choice didn’t quite hit the mark.

“Nicole was probably the most intimidating of the judges. She was so fierce. Everything she did was so strong, so nice, but a little scary,” Harvey laughs. Although, as the two whip up a frenzy performing ‘Sucker’ later that evening, Scherzinger’s request to hear it last year has definitley worked out for the best.

Max & Harvey close their set on latest single ‘Stranger‘ amidst a foray of confetti cannons, fans leave asking when they’ll be able to see the duo again.

“After this tour we’re going to sit down and focus on what we want to do musically,” Max reassures. Not that there’s any risk of a dry patch. “There’s a lot of TV stuff coming,” he teases.

“We love being busy. We come from a family who like to do a lot and we want to make as much entertainment for the world as possible. That’s our end goal, whether it’s music, on TV or social media. We want to be able to entertain.”

Jacks of all trades, somehow Max & Harvey keep the surprises coming. Nicole Scherzinger commented on the twins’ future with “the sky is the limit” last year. And as the boys choose “fun, level-up and enjoyable” as three choice words for what the rest of 2020 holds, you can’t help but think these brothers are arena-bound.

Are you a Max & Harvey fan? Did you catch the twins on tour? Let us know @CelebMix on Twitter.