After a long day of waiting, Fifth Harmony has finally announced their full tracklist for their sophomore album 7/27! Using Instagram, the girls began sharing the titles of their new songs at 10 AM EST. They posted one an hour until all twelve tracks were released.

Each post has a new picture of the girls, as well as one song title from 7/27. Some of them also have comments directly from Camila, Dinah, Lauren, Normani, and Ally. You can see them all down below.

Track one… That’s My Girl

Track four… Write On Me • Write On Me is lyrically my favorite song on the album. To me the song is an extended metaphor where you're asking somebody to "write" on you, envelop you with their words, make their mark on you like you're a blank canvas. -Camila

Track six… All In My Head (Flex) Feat. @fettywap1738 • You can never have enough REGGAE in your life ! The vibe and rhythm to this I feel represents me best as a South Pacific Islander ?? !! this is just one of those feel-good songs that you can't help but jam to, no matter where you're at or who you're with! So imma need you to BUMP THIS ONE hella loud when you're out and about! lol The overall Melody is so memorable you'll find yourself singing it everywhere you go, ESPECIALLY with Fetty Wap's ridiculously, amazing catchy tunes! Lyrically it's FUN & FLIRTY, so don't take it serious because remember it's all in your head! wink wink ? -Dinah Jane ps: one more thing I forgot to mention we co-wrote this song so it's extra special to us

Track eight… Gonna Get Better • When I first heard ‘Gonna Get Better’, there was this insane magical connection. I thought it was beautiful. I did not write it, but it felt like I did. I was going through something that day, and this song perfectly fit my emotion. So, I went to the booth, laid down these words from my heart and sang from my soul. You can say it has a special meaning for me. I'll never forget it. -Ally

DELUXE EDITION • Track eleven… Dope • I resonate with "Dope" on such personal level. Lyrically and melodically it creates an imagery of this girl being super passionate about someone but lacks the confidence to tell them. I have definitely been in the position where I feel extremely fascinated with someone but I'm absolutely loss for words when in person with them. I had the best time in the studio recording this record. I was able to become vulnerable in my own space. It was such an experience. -Normani

DELUXE EDITION • Track twelve… No Way • It’s insane how much we have been through with “No Way”. It actually was recorded about 2 years ago when we were starting to record the first album, Reflection. The second we got this song I remember listening to it over and over and over and over again with Victoria Monét singing the demo on it (who has one of the most beautiful voices ever) and I just connected so intensely with the lyrics. They were so raw and honest about a relationship that was just toxic but from everyone else's perspective and about how they know that they're made for each other and to love each other and to heal each other..but how that love is tricky to keep and have and hold. I just love the way the song takes you on an emotional journey and how you feel the pain of these people's indecision to love or let go. We were able to emote in a way we hadn't ever done before in our music and I think that was why it is my favorite because I felt at the time and every time I hear it now the emotion behind the words; and I hadn't felt that connected to any of the songs in that way before. I love the vulnerability and the reality of the situation. -Lauren

To wrap it all up, here is the official tracklist for Fifth Harmony’s latest album:

7/27 will be released on May 27th; less than a month away. These songs, as well as songs off their first album, will be performed during their tour in South America. These dates were announced on April 27th, all of which you can see down below. 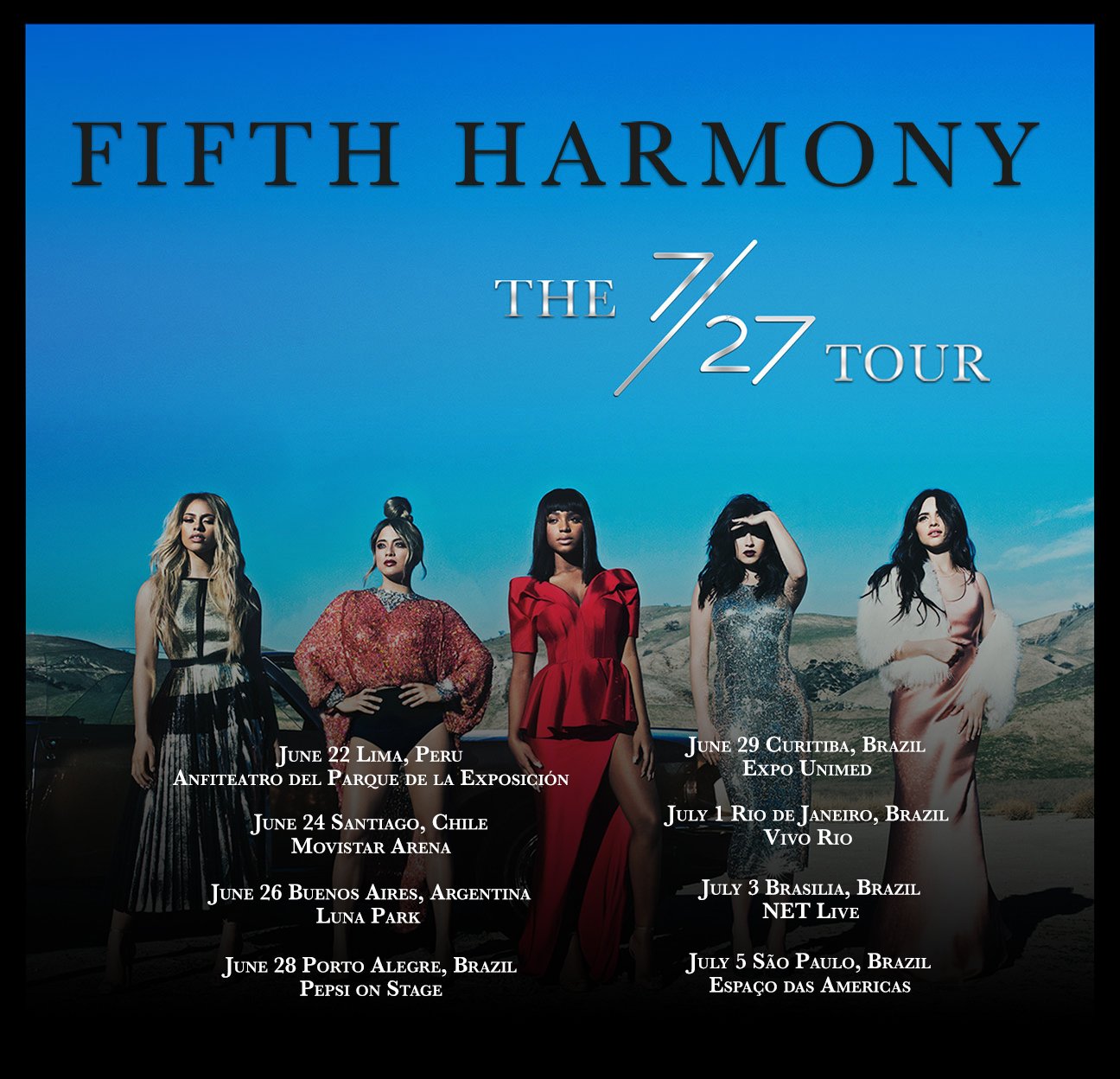 Reflection is incredible, so we can’t wait to listen to 7/27. We’re sure it’ll be fantastic.

Have you already pre-ordered your copy of Fifth Harmony’s newest album? What song are you most excited to hear? Tell us in the comments down below or tweet us @CelebMix/@CelebMix5H.