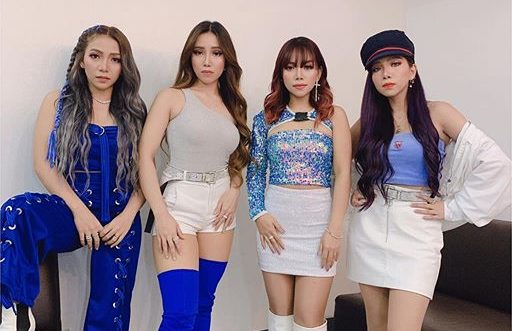 This week marks CelebMix’s five year anniversary so what better way to celebrate than to write about some of our favourite celebrities, this article is dedicated to 4th Impact and their best covers that they’ve performed.

4th Impact (consisting of the Cercado sisters: Almira, Celina, Mylene, and Irene) stole our hearts when they competed on the 12th season of The X Factor in the UK, shocking the world over with their awesome audition of Jessie J, Ariana Grande & Nicki Minaj’s track “Bang Bang”, which now has over 100 million views on YouTube and is the most-watched video on The X Factor‘s YouTube Channel. They sailed through the competition and reached the live shows and ultimately placed fifth. Prior to The X Factor. they competed on Superstar K6 as MICA and placed eighth, some of their performances went viral on social media. Most recently, they’ve been working on their music career, and dropped the awesome song “K(NO)W MORE“.

For years, 4th Impact has covered songs on their official YouTube Channel, as well as for other channels. Their performances on The X Factor and Superstar K6 count as covers, but we’ve decided not to include them in this list. We’ll be choosing our five favourite covers from them right now.

4th Impact has so many covers we weren’t sure which ones we were going to choose but this was certainly one of our all-time favourites. “Bohemian Rhapsody” by Queen is literally one of the hardest songs to sing, yet 4th Impact completely nails it. And, not only that but they manage to give us a great visual to accompany the cover track. Showing off their harmonies throughout, these four sisters really prove that they should be global stars by now.

From one hard song to sing, to another hard song to sing, 4th Impact does not shy away from these difficult tracks and we love them for it because their vocals are always on-point. The original video racked up over 2 million YouTube views but has since been deleted from the platform, and so a fan has re-uploaded a video that they found from a reaction video and added a saved recording of the song, and it’s just as amazing. These girls give some of their amazing harmonies to this song whilst also showcasing how brilliant all their voices are. We promise you that you won’t ever hear another version of “Hello” by Adele quite like this one.

“This Is Me” Cover Originally By The Greatest Showman Cast

Who doesn’t like this song? We mean, it really is such an incredible song and 4th Impact easily does it justice with their cover, adding their signature harmonies to it which boosts this song up into the stratosphere. The performance is great to watch too as they clearly love this song as well. Be prepared to be blown away by this cover.

We have heard so many bad covers of Sia’s “Chandelier” that we’re almost certain that no one can sing this song as good as Sia does; we say almost because 4th Impact presents one brilliant cover of this song. Their performance for MYX Philippines is absolutely brilliant, and it literally gives us goosebumps. Their vocals are pure perfection on this track and their harmonies are so beautiful too. We could listen to this on repeat for days on end!

We have a double Zara Larsson cover here and 4th Impact impresses throughout – surely we expect nothing less by now. They turn these songs into their own, adding harmonies where there wasn’t any before and it just makes these two songs extra special. These four sisters just make these songs sound amazing and we could so listen to their voices over and over again.

What are your favourite covers from 4th Impact? Let us know on Twitter @CelebMix.