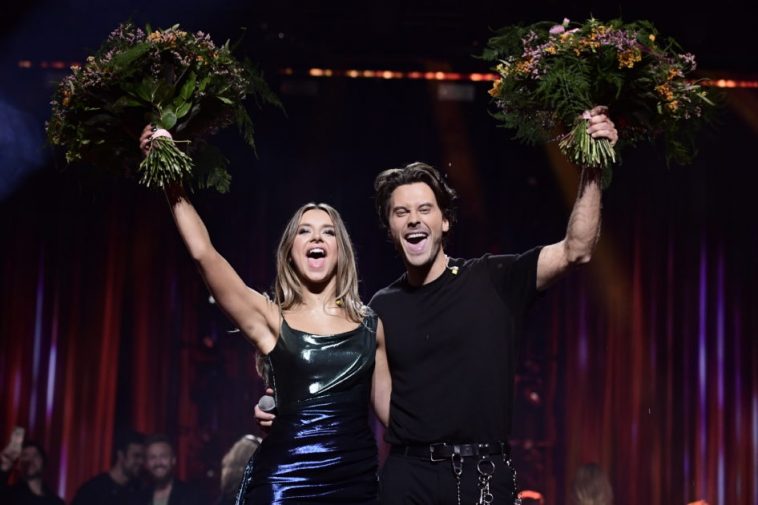 Saturday night saw the fourth Semi-Final of Melodifestivalen 2020 begin. The song contest is the Swedish national selection show for the Eurovision Song Contest 2020 and has been running for 60 years now, and when the winner is announced they will become the 60th winner of Melodifestivalen. Semi-Final 4 took place on 22 February 2020 and saw Hanna Ferm and Victor Crone go straight through to the Final.

Taking place at the Malmö Arena in Malmö, the show was presented by David Sundin, Linnea Henriksson, and Lina Hedlund. Seven acts competed in front of the Swedish public, two was sent through to the Final, whereas two more were sent to the Second Chance round. A total of 345,945 kronor was donated to the Radiohälpen charity.

Since tonight was the last Semi-Final, the winners’ songs and performances have been officially released, giving everyone a fair chance.

We met her last year where she sang the awesome ballad “Hold You” alongside LIAMOO, now she’s on the Melfest stage as a solo act with an up-tempo pop number. She worked the stage and drew us in with her addicting song “Brave”. Her staging was simple with two diagonal clear walls lit up with lights, we feel more could’ve been done, but the song is really good – can this win?

Probably one of the most intricate stage designs on Melodifestivalen 2020, Victor Crone brought it completely for his performance of “Troubled Waters”. The Swedish singer-songwriter is best known for representing Estonia at the Eurovision Song Contest 2019 with the song “Storm” where he placed 20th; now, he’s on Melfest hoping to represent his own country. He competed in Melfest, previously, in 2015, when he featured on Behrang Miri’s song “Det rår vi inte för”, where they made it as far as the Andra Chansen round; this time he’s done better going straight to the final. Brilliant from the very start, we watched Victor Crone interact with a water-themed floor screen as he was lying down, before interacting with it again later on in the song. His vocals are fire throughout and he gives passion and emotion whilst nailing the chorus in every way. This is our favourite song in the whole competition – and we like a lot of these songs so far. We honestly believe this is one of the strongest Melodifestivalen shows we’ve ever watched.

Between them, they’ve competed at Melodifestivalen a total of three times; Ellen Benediktson competed in 2014 with the song “Songbird” heading straight to the Final and placing seventh, she then returned in 2015 with the song “Insomnia” and placed fifth in her Semi-Final; as for Simon Peyron, he’s the vocalist for Swedish metal group Outtrigger who also competed in 2014 with the song “Echo” which went to Andra Chansen and lost the duel they were in. Now, these 2014 contestants have joined together for a duet that on paper should sound like a disaster – metal and pop together shouldn’t work – yet on that stage, it worked and was strong enough to make it through to Andra Chansen. There’s a lot of love for this song and it’ll be interesting to see how well this does next week, we weren’t so keen but maybe it’s a grower of a song and one we’ll enjoy listening to next week.

Frida Öhrn – We Are One

Knocking out all of the Swedish songs in this Semi-Final, it seems the Swedish public prefer English tracks or think they make for a better Melfest Final, we were surprised that this reached the Andra Chansen round. Frida Öhrn presented her song “We Are One” with a basic staging and a song that didn’t seem to go anywhere, although we have to admit her vocals were on-point throughout, we’re just in a bit of shock it gained more votes than the ones below. She’s best known internationally as the vocalist of the band Oh Laura who had a hit with the song “Release Me” which charted in Sweden, the UK, and Norway; she later became a part of the Swedish group Cookies ‘N’ Beans which entered Melodifestivalen in 2009 with “What If”, where they came fifth in their Semi-Final, and in 2013, with “Burning Flags”, where they made it to Andra Chansen. Can Frida Öhrn do one better this time around and make it to the Final?

Definitely one of our favourites of the night, newcomer William Stridh completely brought it, with brilliant staging, superb vocals, and a perfect performance, there was nothing more he could’ve done. The song translates to “Cloud Light” and the lyrics focus on wanting to have the person he loves back in his life. The smoke machine was going and the circle light behind him really lit the smoke up creating a lightened cloud-like stage. We’re disappointed this didn’t at least make Andra Chansen but we’re hopeful he’ll return to Melodifestivalen soon, and hopefully, this helps to kick-start his music career as this is his debut single following his fifth placement in Sweden’s version of Idol in 2018 and his involvement in the duo, The Audrey, who are best known for the single “Body Language”.

There are a lot of catchy Swedish songs available in this world and Jakob Karlberg’s “Om du tror att jag saknar dig” (“If you believe that I miss you” in English) is one to add to the list. The up-tempo track is one that will surely get stuck in one’s head, especially with Jakob Karlberg’s awesome vocals. The staging was intricate, reminding us of Lake Malawi’s Eurovision entry for the Czech Republic, last year, with the song “Friend of a Friend”, mixed with an art-pop concept, that totally worked and made him stand out. Such as shame this didn’t make Andra Chansen, at least, but clearly the Swedish songs totally suffered in this Semi-Final. Jakob Karlberg is building his career in Sweden, having released a number of Swedish singles with “Fan va bra” hitting 40 million Spotify streams and going on to chart in Sweden at number seven. We hope to see him return to Melfest.

We’re at the point where Nanne Grönvall is just competing for fun, but how on earth did this not get more votes? She literally built a car on the stage out of her dancers! Unfortunately, it wasn’t enough, but surely James Corden will come ringing soon, requesting for a Nanne Grönvall carpool karaoke, that’s certainly what we all would love to see, following this awesome performance. Full of energy and excitement, Nanne Grönvall was unstoppable on the stage, knocking out the choreography in time with her backing dancers and giving us some unforgettable staging. The fun upbeat number expresses her wish to sing Carpool Karaoke with James Corden, as loud as possible – we really do not blame her, we all want to be in that car during the Carpool Karaoke scenes. With a staging like this, a Carpool Karaoke with James Corden and Nanne Grönvall would be amazing! We’re just sad this didn’t make Andra Chansen, at least. She previously competed as a solo artist in 1998, 2003, 2005 – which is the closest she has been to winning as she came second, 2007, and now 2020.

We also had an opening performance from the hosts Linnea Henriksson, Lina Hedlund, and David Sundin which started off as a film trailer before launching into a musical on-stage scene named “Mellomusikalen” (“The Mello Musical” in English). Then David Sundin returned for a comedy sketch with song, which certainly showed his comedic qualities and his singing capabilities.

We found this fourth Semi-Final one of the most shocking out of all four of them, but it also felt very competitive and was amazing to watch, just like the first Semi-Final. The third Semi-Final and second Semi-Final weren’t as great in comparison, but still brilliant to watch none-the-less.

Next up will be the second chance round, which is also known as Andra Chansen. This will take place on 29 February 2020, at the Stiga Sports Arena in Eskilstuna, Sweden. We will watch four sets of duels, Anis don Demina vs. Ellen Benediktson & Simon Peyron, Malou Prytz vs. Paul Rey, Felix Sandman vs. Frida Öhrn, and Méndez feat. Alvaro Estrella vs. Drängarna. Only one from each duel will advance to the Final.

Semi-Final 4 is available to catch up on the SVT official website.

What did you make of Hanna Ferm and Victor Crone winning the fourth Semi-Final of Melodifestivalen 2020? Let us know on Twitter @CelebMix.