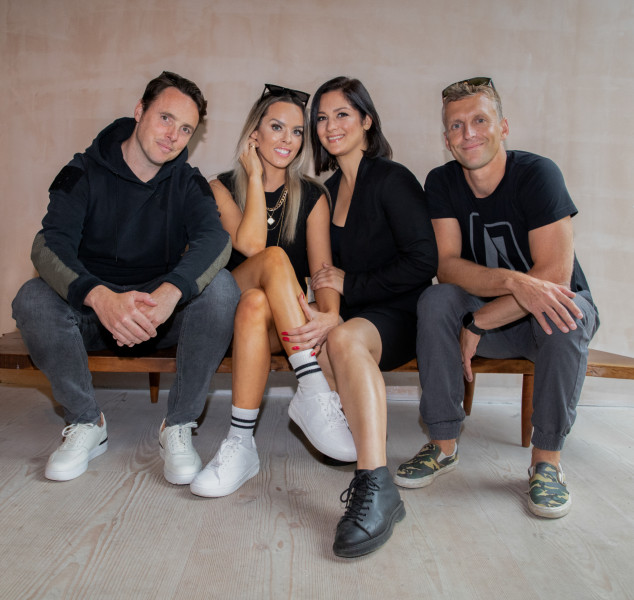 UK producers SUPER-Hi & Neeka release their new EP, Following The Sun, via BLENDED, following on the heels of last year’s smash single of the same name, with more than 65 million streams, 200,000 radio plays, and a million shazams.

Talking about their sensational single, SUPER-Hi shares, “We wrote ‘Following The Sun’ with one ambition: to make people happy. If we can bring some light and positivity to the world right now, then we have succeeded.”

The EP features remixes from Supermini and Choomba, along with the demo of a spanking new track, “Strangers On A Train.”

SUPER-Hi is made up of producers Red Triangle, aka George Tizzard and Rick Parkhouse, who have worked with Yungblood, KSI, David Guetta, Charlie Puth, James Arthur, 5 Seconds of Summer, Alesso, and Green Day, along with a host of others.

Brimming with the feel-good vibes of indie-pop and dazzling dance energy, “Following The Sun” rides an infectious rhythm topped by tasty authentic vocals.

CelebMix spoke with SUPER-Hi & Neeka to find out more about their influences, how they got together, and the inspiration for their new EP, Following The Sun.

What inspired your EP, Following The Sun?

We’d had lots of remixes submitted for our single and we wanted to showcase our favorites; also, we had lots of new songs written and we really wanted to put one up to see what people thought.

When and how did the two of you start working together?

We met about 15 years ago and over a lot of beers decided to go into business together – at the beginning of lockdown, we decided that we would try and release some of our own music and we chose ‘Following The Sun’ as our first record. We still can’t really believe the way it’s reacted!

Neither of us wanted a real job, and we were so stubborn we never gave in to the dream of making a living through music.

Which musicians/producers influenced you the most?

We both love the Red Hot Chili Peppers, and more recently we’ve been listening to lots of Australian indie dance, so many amazing bands over there.

Completely naturally, we both play instruments (badly) so the basis of whatever we sound like was always going to be real instruments, ‘Following The Sun’ was us trying to do a dance thing so with the organic elements it’s made something maybe people haven’t heard before.

Listening to whatever people are doing in all genres of music and wondering ‘how the f*** are they doing that?!’

Rufus Du Sol, Bag Raiders, BAYNK – we love whatever they do at the moment.

It can be a chord progression or something somebody says that triggers an emotion, with ‘Following The Sun’ it was both – we had a great chord progression and were desperate to escape lockdown and go on a road trip!

Keep at it, and never push it. If you feel uninspired for weeks on end, it’s frustrating but you must accept it, it’ll pass and usually, you’ll write your best stuff after a block. Also study what people you love do, hopefully, some of that they do will inspire you.

Hopefully, lots of new releases that people like! We’re so blown away by the response we’ve had so far, and we feel so grateful for being able to do it.