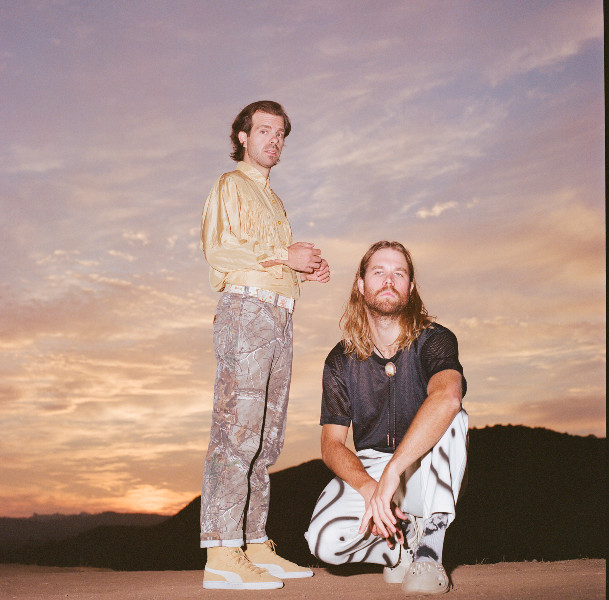 Alt-rock duo The Darcys unveiled their new single/lyric video, “Running For The Hills,” moments ago, a song inspired by their recent move from Toronto to Los Angeles.

Wes Marskell explains, “I grew up in Toronto; its coffee shops, shawarma restaurants, and construction sites are in my blood. Toronto will always be my home, but I’ve had this ongoing love affair with Los Angeles (something I probably didn’t suppress all that well on our last few records). With everything happening in the world this year, I packed my stuff and moved to LA. There was no sign, no grand gesture, it just felt like now or never. I’m well aware that the bright lights of LA can often be a mirage, but I needed to live it for myself. This city has spit out people a lot better than I over the years, and I could easily be just another one of them, but that’s a fate I’d rather tempt than live forever not knowing. At its core, that’s what ‘Running For The Hills’ is about. It’s about change and it’s about looking forward, not back.”

After five albums and more than 21 million streams, as well as nominations from the JUNO Awards, the Polaris Prize, and an MMVA, along with features on Billboard, SPIN, NPR, Esquire, and American Songwriter, The Darcys innovation and creativity continue to evolve.

CelebMix caught up with The Darcys’ vocalist and multi-instrumentalist Jason Couse to ply him with questions about The Darcys’ sound and what inspires their songwriting.

What inspired your new single “Running For The Hills?”

It’s so easy to get comfortable and complacent in life, even if that situation might not be ideal. To say it’s challenging to take a leap of faith is an understatement, it can mean an upheaval of your life, the end of a relationship, or a move to a new city. That said, sometimes the unknown can be more attractive than the life you’ve become accustomed to. ‘Running For The Hills’ is about taking that leap, gambling it all, and not looking back.

How and when did The Darcys come to get together?

The short version is that we’ve been friends since childhood and had been playing and recording music together on and off since grade school. It wasn’t until we finished university that we took our career seriously enough to start working with different producers to help shape our sound. I think the most significant breakthrough for us was finding the confidence in our own production skills to really dive into the details and take full control of our output. ‘Running For The Hills’ is the next step for us, and it bridges the approach of our last album, Fear & Loneliness, to what’s coming next.

Who is in The Darcys and which instruments do they play?

We are a duo, and to make it all work we’ve always been very collaborative. Over the years, we’ve better defined our roles to play to our individual strengths. Wes plays drums and is behind a lot of the conceptual work, including writing most of the lyrics and coming up with ideas for the overall sonic and visual approach. I sing and play a bunch of the instruments, but what I love most is recording and producing the music. Of course, we both spend way too much time on social media, but that’s probably just a given for any artist in 2021…

What’s the story behind the name The Darcys?

As is the case with many bands, the name gets solidified long before the project gets taken seriously. Like most words and names, once you say it enough it loses meaning to you, and for us it has just become a symbol of our partnership and mutual dedication to creating things, rather than the haphazard way we stumbled into the moniker.

It seems like every time we embark on a new record, we end up with two. For our self-titled album back in 2011, we also created a full-length reinterpretation of Steely Dan’s classic Aja, and our 2014 album Warring also spawned a 20-minute instrumental piece inspired by Cormac McCarthy. I think this happens because we think a lot about our approach and commit to certain themes (both lyrically and sonically) for a project. Sometimes all of that can’t be neatly contained in an album. Of course, from our perspective, every album, every song really, is completely different from the last, but we really noticed a change in our audience when we released Centerfold in 2016. We made a pretty bold choice to write more pop and dance-minded music, and it elicited a pretty strong response from our fans. I think these risks are essential to being an artist because what’s the point if you’re just going to keep making the same thing over and over?

Sometimes I wonder if it was even a choice. Encouraging families and access to instruments aside, in our high school years turning up loud and jamming a couple of nights a week was our way of dealing with the struggles of adolescence. Later, when we were deeply wrapped up in university life, playing a gig every couple of weeks was our respite from the endless hours of reading and studying. At a certain point, it just becomes part of who you are, and I think we’re lucky that it has been something we’ve shared all these years.

In terms of listening, I’ve really been loving James Blake’s new stuff, but also tend to have a couple of smaller artists on my repeat listening, like Nick Hakim and Dijon. I think from a success standpoint it is always amazing to see artists push the boundaries of genre, and for that reason, I admire people like Lil Nas X and Halsey.

We have made it a big part of our process to take influence from film. Sometimes even Hollywood blockbusters, really anything that is committed to an aesthetic and finds a way to be deeply engaging. Especially on our last album, Fear & Loneliness, we brought our love for movies into the music. You’ll find a number of references in the lyrics, but also in the instrumentation and mood of the music. We’ll spend a lot of time making sure the mood of the music works with the narrative of the lyrical content as if the words are a scene on a page and the music is the film.

We’re super excited about our new song ‘Running For The Hills’ and the totally bonkers music video. Speaking of movies, making this video has been a super fun way to engage with our cinematic interests on a deeper level. This is by far our edgiest video yet and we’re anxious to see how it’s received. We’re always working on new material so people can stay in the loop by following us on Spotify/Apple Music/Amazon Music and of course our socials, especially TikTok. We’ll be playing some shows soon, we’re just working out the details, but it looks like 2022 will be one of our busiest yet.