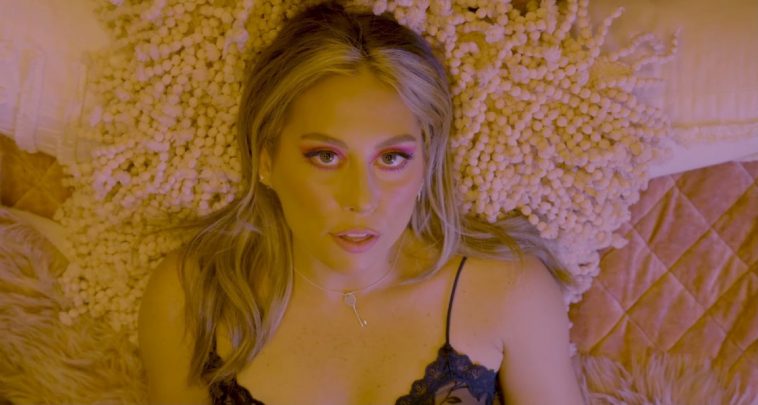 Megan decided to be a singer-songwriter and performer early in life. In 2012, when she was 14 years old, she released her debut EP, which caught the attention of songwriters and producers in Nashville and Muscle Shoals. Before long, she found herself in a recording studio in Alabama, laying down tracks for her self-titled debut full-length album.

She followed with her 2018 EP, State of Mind, which earned the EP of the Year from 93.7 WSTW, while the EP’s single, “Fade,” appeared on CMT’s Racing Wives.

Impressed by her swanky sound and deluxe voice, CelebMix spoke with Megan Knight to discover more about the person behind the music, how she got started in music and her influences.

What inspired your new single/music video, “My Drama?”

This video depicts the loss of innocence. It starts in a place of pure ignorance… ignorance is bliss. It’s easy to go along wearing rose-colored glasses in life. The video opens with me in shades, dressed innocently and cleanly to depict that. The reality of society eventually hits; the video shows the wear society has on a soul over time. From a woman who would never turn to smoking, drinking, just endless vices in general, she eventually turns to them all. There’s a complete spiral downhill. A total loss of identity. The track’s message was written from a place of realization that love is not the fairytale we were introduced to as a kid. Relationships force you to face yourself and new sides that you didn’t even realize existed before. We all have demons and trauma in our lives. The video for ‘My Drama’ enhances the listener’s interpretation of the lyrics. The video is actually foreshadowing my next single as well. If you noticed, the good side was tied up and taken over by the dark side in the end. My next single is written from the dark side’s perspective.

What do you hope people take away from the video?

I hope people take away a feeling of relatability. I think society can sometimes present itself with a massive sugar coating, and people are left feeling alone or misunderstood by that. I wanted to depict the side of love that’s not talked about as much.

Talk us through your mindset going into the project?

I definitely wanted to make a concept record. I went in knowing I wanted to tell a story where you could listen to the project top to bottom, and it would take the listener through a journey like a movie would.

What kind of guitar do you play?

I always play Larrivee’s, LV03 is my favorite.

Has your tone changed over time, or has it remained pretty much the same?

Everything about my singing, musicality, and perspective constantly shifts over time. I feel my music is directly reflective of my personal life and who I am in the present moment of creation and that’s literally always morphing.

At the age of 12, I wanted to learn guitar because I was wasting a lot of time playing a fake one on the video game RockBand, haha. I told my parents about this new desire and that Christmas I was given a Yamaha.

What sparked the interest?

RockBand and I also grew up around a lot of music as I have family members in bands that I’ve been around forever.

Yes, everybody’s music taste is all over the place; it’s incredibly diverse here, so it definitely had me listening to every genre imaginable.

Honestly, it can be anything, I’m always finding new things to be inspired by whether it’s a conversation I have with a friend, hanging around my family… relationships… it’s constantly changing. When I say inspired, I mean both musically and spiritually.

I have a new single releasing on March 11th, 2022, and a new lyric video that will be coming out with it. My EP will be dropping shortly after that, along with Live Session Recordings filmed at The NuttHouse Recording Studio in Muscle Shoals, AL. I am playing tons of shows as well, and my tour dates can be found on my website.