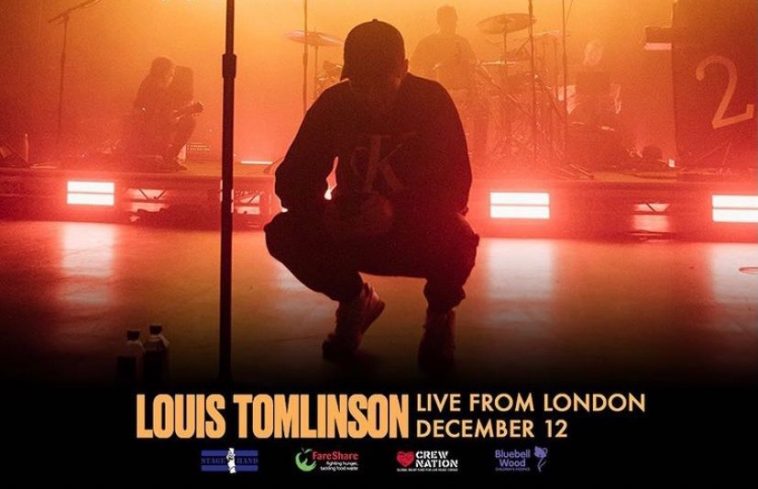 Louis Tomlinson has announced that he shall be doing a special one-off live streamed show on December 12th.

The multi-camera event will feature Louis and his full band performing, whilst keeping to strict COVID guidelines. The stream will be available to watch for 28 hours, giving fans around the world a chance to view at a time which best suits them.

Profits from the show are being split between:

FareShare– the UK’s largest food redistribution charity, with more than 30 warehouses across the UK. It takes food from the food industry that can’t be sold in shops, either because of packaging errors, short shelf life or overproduction. That food, which is the same as the food you’d eat at home, is then redistributed through a network of 11,000 frontline organisations, across the UK such as homeless hostels, school breakfast clubs, domestic violence refuges, older people’s lunch clubs, food banks and hospices.

Crew Nation– Live music inspires millions around the world, but the concerts we all enjoy wouldn’t be possible without the countless crew members working behind the scenes. Crew Nation is a charitable fund, created to help the people who were supposed to be working on shows planned for 2020. So far, the fund has raised $15 million, helping 15,000 live music crew members across 36 countries who were impacted by the rescheduled or cancelled shows

Bluebell Wood Children’s Hospice– Louis is a long time supporter of Bluebell Wood. Children’s Hospice. Which cares for children and young adults whose lives are sadly just too short, both in their own homes and at the North Anston Hospice. The charity supports children and young adults with life-shortening and life-threatening conditions, and are currently helping over 300 families at the hospice and in their homes across the region. Bluebell Wood is very much a happy, joyful place focused on helping families make wonderful memories together whether they have weeks, months or years together.

Stagehand– The live events sector is in crisis and the largely self-employed workforce faces a long winter without work, many of them without any form of alternative financial support. Stagehand is for those people, to provide grants that help to cover basic living expenses for the crew and their families. These grants are already helping to relieve the financial and mental burden of keeping a roof overhead and providing for families throughout this crisis.

Louis will also be donating money to his own touring crew, many of which have been out of work since March.

The show is set to feature some surprises alongside songs from Louis’ debut solo album ‘Walls’ which, was Top 3 in the UK and Top 10 in the USA.

After postponing his 2020 World Tour due to Covid-19, Louis is eager to finally get on the road with his first solo tour next year, which is already sold out. Louis said: ‘I was absolutely gutted to have to postpone my world tour this year as I was really looking forward to seeing all the fan. Performing for a live crowd is the most important thing to me, this live stream is a step back into that world and is something I can’t wait to film. I want to put on a real show for the fans, with scale and production, creating something special to end 2020 on a positive upbeat note and raise money for charities that are especially close to my heart. I also want to give my touring crew worl, and raise some vital money for them, as without my crew the show literally couldn’t go on.’

In addition to the stream, Louis is also releasing an exclusive range of new merchandise that will also go on sale on November 25th. All profits from this merch will go to the above four charities and Louis‘ touring crew.

Tickets for the show will be go on sale here from 4pm on November 25th.

Are you excited for Louis’ worldwide live streamed gig? Let us know on @CelebMix!