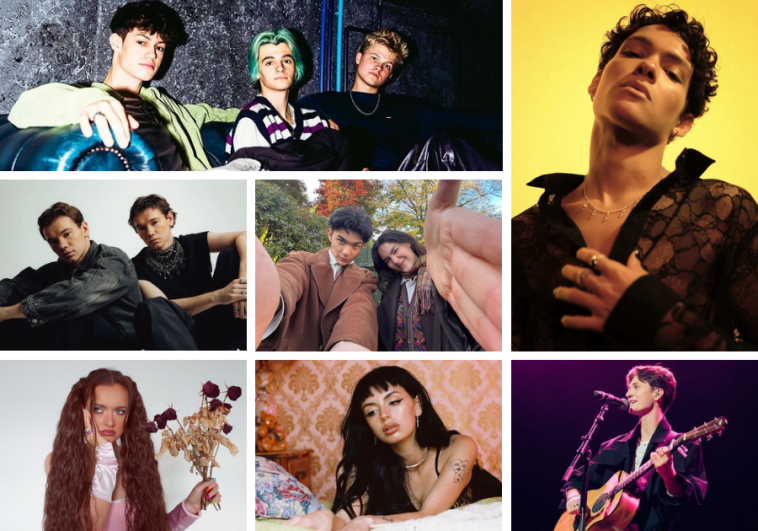 It’s time to fire up those new playlists and leave your Spotify Wrapped for 2022 behind – 2023 has finally arrived.
In 12 months time we’ll be looking back at what is sure to be another fantastic year for music full of breakthrough artists and all your new favourite songs.
CelebMix is on hand to try and help you get ahead of the game to be ready and waiting for the next big thing to release new music this year.
Here are seven of our top artists to watch as we get stuck into the musical year of 2023.

For fans of: The Wombats, The Vamps, Wet Leg
Listen to: ‘Demons’
Fresh-faced indie boys Ryan, Cooper and Josh spent much of 2022 cutting catchy tracks with earworm lyrics. There’s a whole lot of personality packed into the three teenagers who have fostered a confident sound of their own. Radio 1 support and a UK tour were highlights of last year – you can’t help but picture The Tyne on big festival stages.

For fans of: Troye Sivan, Olivia Rodrigo, Lauv
Listen to: ‘In the Sunrise’
Omar Rudberg is perhaps best known for his role on Netflix hit Young Royals and if that show’s success has thrust his own music into the spotlight, it’s a very good thing. The 24-year-old’s debut album OMR was released last year and is nothing short of perfect pop. New music is coming as soon as Friday, January 6 in ‘Call Me By Your Name’ with Claudia Neuser ahead of what is set to be a big 12 months for the star.

For fans of: Charli XCX, Tove Lo, Dorian Electra
Listen to: ‘Crumbs’
If there’s one album you need to get excited about in 2023, it’s the upcoming full debut project from Rebecca Black. A dive into a world of queer, underground pop music has revitalised the singer who first reaching viral fame with ‘Friday’ all those years ago. One of the industry’s freshest voices.

For fans of: Mimi Webb, Sabrina Carpenter, FLETCHER
Listen to: ‘Modern Romance’
NEVE has fast developed a habit of pushing all the right pop buttons and didn’t place a foot wrong in a string of releases throughout 2022. Clever lyrics and hooks for days, the Northern Irish songwriter feels only a second away from a viral track to break the internet. Catch her supporting Betty Who across the UK and Europe this month.

For fans of: Jorja Smith, Arlo Parks, Clairo
Listen to: ‘ur so pretty’
Sibling duo Will Gao and Olivia Hardy are doing things very much their own way as Wasia Project. You could pick anything between pop, jazz, classical, indie and more to try and put a genre to the classy sound the duo has made their own. The Wasia Project fan base is already huge and very passionate, with venues just getting bigger and bigger.

For fans of: HRVY, Sam Ryder, Justin Bieber
Listen to: ‘Gimme Your Love’
Marcus & Martinus have been around for over a decade but there’s a sense of a new era on the horizon as we go into 2023. The twins were just kids when they won the Melodi Grand Prix Junior in 2012. Now about to turn 20, Marcus & Martinus are signed up to Melodifestivalen and, if ‘Gimme Your Love’ is anything to go by, sat on some of their best music yet.

For fans of: Lewis Capaldi, Ruel, LANY
Listen to: ‘you were there for me’
Henry Moodie’s Spotify page makes pretty impressive reading – his debut and only single, ‘you were there for me’, has already amassed nearly 40,000 streams. A support slot for The Vamps last year helped drum up the hype around the singer/songwriter even more. Next up is new single ‘drunk text’, but that will only be the start of a big 2023 for the 18-year-old.

Who are you looking forward to new music from in 2023? Let us know @CelebMix on Twitter.