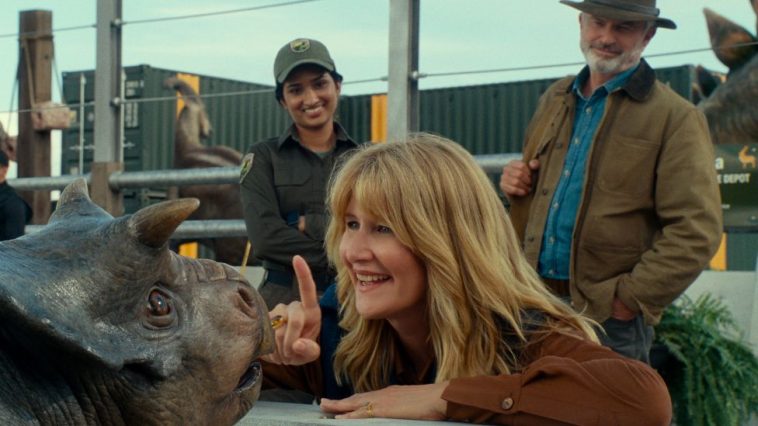 Jurassic Dominion is the long-awaited conclusion to the much-loved Jurassic World trilogy and it’s a fun and nostalgic watch that doesn’t take itself too seriously.

It’s a movie you can easily watch and enjoy without having seen any of its predecessors but is a nostalgic experience if you have, as many of the original cast return.

As ever with all the Jurassic Park movies it’s full of dinosaurs and humans failing to realise they are extinct for a reason and then having to deal with the consequences of bringing back the long-dead species. Jurassic Dominion is not much different from them.

Four years after the destruction of Isla Nublar, dinosaurs now live–and hunt–alongside humans all over the world. This fragile balance will reshape the future and determine, once and for all, whether human beings are to remain the apex predators on a planet they now share with history’s most fearsome creatures in a new Era.

Directed by Chris Trevorrow, it sees Chris Pratt and Bryce Dallas Howard reprise their roles from the previous two films and the return of Laura Dern, Sam Neill, Jeff Goldblum and BD Wong who all starred in the original Jurassic Park movie which was released in 1993.

Plot-wise the film is not groundbreaking but it’s an easy watch one which will appeal to long-time fans of the series and one that will give younger fans obsessed with Dinosaurs something to talk about.

Let us know what you think of the movie on @CelebMix!