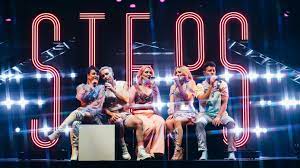 What The Future Holds marks the 10th tour for Steps, a band that next year marks its 25th anniversary. We were lucky enough to be invited to watch the show on the band second night at the o2 in London over the weekend which was now been announced as the last night of the tour. Sadly the remaining dates are having to be rescheduled due to band member Lee Latchford Evans and another member of the band’s tour party, testing positive for covid, the tour will no longer go ahead, and the last couple of dates will happen in 2022 instead.

The atmosphere in the O2 on Saturday night was electric. Everyone in attendance knows that a Steps concert means one thing, a two-hour party.

Sophie Ellis Bextor was on hand to get the party started, dancing around the stage and belting out some of her hits, which had the audience getting in the party mood, screaming the words back to Back To You, Crying at the Discotechque and Murder on the Dancefloor.

After a brief interlude which gave the excited audience time to go to the bar or the bathroom, Steps took to the stage, (sadly minus Lee who it had been announced earlier in the day had tested positive for covid and was self-isolating.) opening with What The Future Holds, with the crowd on their feet singing along, setting the tone for the entire jam-packed show which saw the band belt out hit after hit, interspersed with tracks from their latest album. Including One For Sorrow, Heartbeat, After The Love Has Gone, Chain Reaction, Summer of Love, Stomp Tragedy and newer tracks Take Me For A Ride, Something in Your Eyes, The Slightest Touch, and their latest single A Hundred Years of Winter, which was penned by 90’s Savage Garden Frontman Darren Hayes.

It was an energetic and full-on show. The band doing their best to give the crowd the best show possible, despite being a member down. The show also saw the welcome return of the much-missed Faye Tozer who had missed some shows due to testing positive for covid. The crowd’s delight at having her back on stage was clear to see as was the sheer delight of her bandmates. The band asked for the crowd help singing Lee’s infamous rap in the iconic 5678, due to his absence. Which made for a fun karaoke moment with the crowd, with the words appearing on the screen.

Ian “H” Watkins also got a standing ovation during his speech, he spoke about how Steps fans had made him feel safe to be himself on stage. It was a very heartfelt moment which many of the crowd identified with. H, with both Faye and Lee having caught covid during the tour has had to sing not only his own vocals but take on most of theirs too, with little to no time to learn them. The band’s ability to adapt to the circumstances they’ve found themselves in on this tour show they are true professionals and just why they are soon to celebrate their 25th year as a band.

Other stand out moments include Claire Richards stunning vocals in One For Sorrow, After The Love Has Gone, A Hundred Years of Winter and Heartbeat, where she wowed the audience with the power of her vocals. While Lisa Scott Lee is a joy to watch, her dancing and overall enthusiasm and clear love of being on stage with her bandmates is something lovely to see.

Steps are a band that know how to put on a show. Their shows are just two hours of pure, feel-good fun. A safe space to let go, be yourself and sing and dance your heart out.