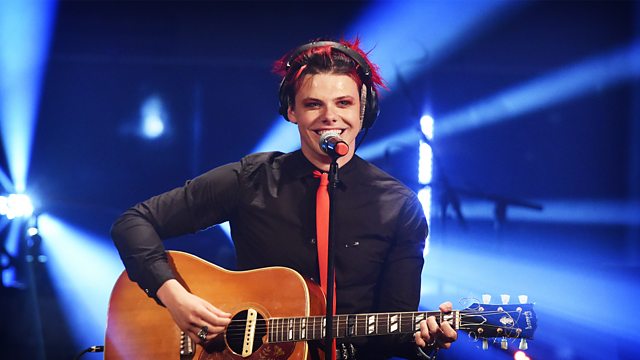 The multi-talented artist put his own unique spin on Taylor’s ‘cardigan’ and Avril’s ‘I’m With You’, creating something truly beautiful. Even Taylor herself was hooked on the performance, later tweeting that his rendition took her breath away.

In addition to a signature cover, YUNGBLUD also delivered a rousing performance of one of his latest singles ‘strawberry lipstick’. Check out both performances in all their glory below.

During the show, YUNGBLUD also told Clara Amfo about his exciting new project – The YUNGBLUD Podcast – which will be launching on BBC Sounds in October. The weekly podcast will see the artist turn his hand to presenting as he meets young music fans who are approaching turning points in their lives. Each episode will see him chat to one fan about a range of issues which affect young people today including gender, sexuality, identity, mental health, friendships, style and more.

Earlier this week, YUNGBLUD also announced The Weird Time of Life Tour, a 16-date global digital run, presented by Moment House, which will be a unique localised experience with full-scale production.

Speaking about the show, YUNGBLUD said: “the thing I miss about playin shows is the individuality of every night. The different faces, the different energy, but most of all the different cultures. Our community may be from different parts of the world yet we have similar beliefs, it is incredible.

“I wanted to do a show for as many cities as I could, playing songs off my new album for the first time. This album helped me so much and I wanted to bring it to the fans with all the energy, all the passion, all the love and all the fucking rage that went into it. Just because we can’t touch each other, doesn’t mean we can’t feel each other. I’ll see you in your city.”

Tickets for the digital tour go on sale here on Friday (October 2) at 5PM BST. Fans can get priority access to the ticket sale by pre-ordering YUNGBLUD’s forthcoming album Weird! before 9:30am BST on October 1.

YUNGBLUD will release his full-length sophomore album Weird! on November 13 via Locomotion / Polydor Records. The album will include his latest single ‘god save me, but don’t drown me out’, which was recently unveiled along with a powerful music video.

What did you think of YUNGBLUD in the Live Lounge? Are you excited for this forthcoming era? Let us know on Twitter @CelebMix