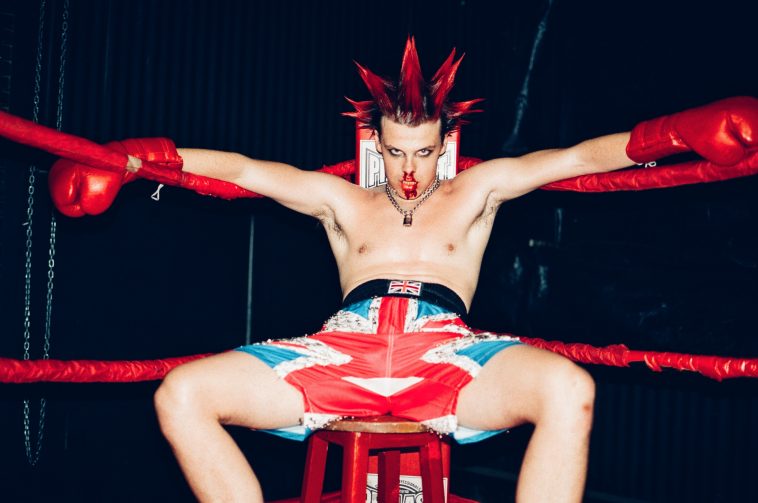 Yorkshire rocker YUNGBLUD is back with his sensational new single ‘Strawberry Lipstick’, taken from his forthcoming full-length sophomore album which is due out later this year.

Co-produced by YUNGBLUD with his longtime collaborators Chris Greatti and Zakk Cervini, ‘Strawberry Lipstick’ is an explosive punk rock offering from the 22-year-old, packed with snarling vocals and his trademark larger-than-life energy.

The warped love song also comes accompanied by an equally chaotic music video which sees YUNGBLUD in a number of bizarre scenarios. Directed by Christian Breslauer, the visual, which also stars LA based singer-songwriter Jesse Jo Stark, sees YUNGBLUD rocking out in a Union Jack dress, lounging in a bath of strawberries with Jesse, and stepping into the boxing ring.

Check out the music video for ‘Strawberry Lipstick’ below.

The release of ‘Strawberry Lipstick’ follows on from YUNGBLUD’s previous single ‘WEIRD!’, which turned out to be a relatable quarantine anthem. The singer-songwriter also recently unveiled the third episode of The YUNGBLUD Show, where he was joined by Paris Hilton and activist Kenidra Woods.

Alongside releasing new music, YUNGBLUD also recently announced that the follow up to his debut graphic novel The Twisted Tales Of The Ritalin Club 2: Weird Times at Quarry Bank University is available to pre-order now. Available in multiple editions, the comic follows YUNGBLUD and his super-powered friends as they navigate university life and all its drugs, sex, and relationship drama — ultimately finding themselves caught in a trip that may cost them their lives.

‘Strawberry Lipstick’ is available to download and stream now.

What do you think of ‘Strawberry Lipstick’? Let us know your thoughts on YUNGBLUD and his new single on Twitter @CelebMix