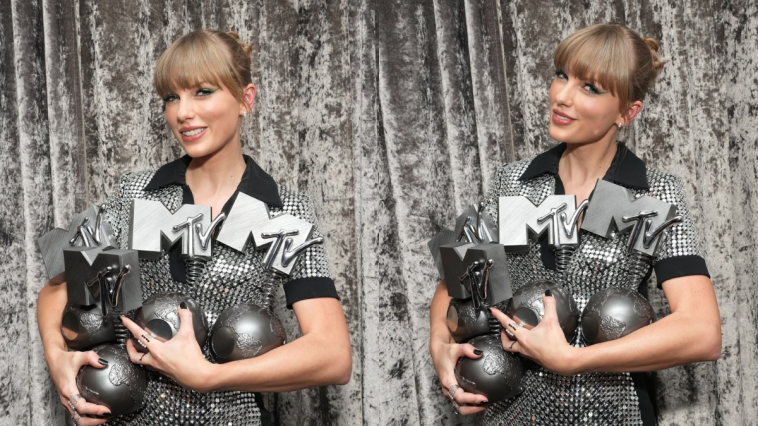 Finally, the 2022 MTV EMAs returned in full swing on Sunday, November 13, held at the PSD Bank Dome in Düsseldorf, Germany, for the sixth time.

Co-hosted by Rita Ora and Taika Waititi, the award night kicked off with powerhouse performances by Bebe Rexha and David Guetta — doing their wistful team-up “I’m Good (Blue)” — Muse walloping out on the stage, along with Gorillaz, OneRepublic, GAYLE, and tons of unexpected performances by several entertaining performers. However, it’s the awards that have everyone’s attention, including the nominated artists and music connoisseurs from all over the world who were anxiously waiting to see who wins.

Taylor Swift, in her true ‘forever-winning diva’ fashion, triumphed at this year’s extravaganza as she took home four awards in the top categories at the MTV European Music Awards. This includes — best artist, best video, best pop and best long-form video for “All Too Well (10 Minute Version) (Taylor’s Version).”

This is Swift’s second win for best video. She won three years ago for her “ME!” collaboration with the American singer Brendon Urie, best known as the lead vocalist, primary songwriter and multi-instrumentalist of Panic! at the Disco.

Nicki Minaj, David Guetta and SEVENTEEN each won two awards. There were two new categories this year — the best long-form video and the best metaverse performance, which went to BLACKPINK.

This year’s MTV EMA Generation Change Award went to three Ukrainian women — Lina Deshvar, Anna Kutova and Anfisa Yankovina — for fighting for the care and rights of those affected by the humanitarian crisis in that country. MTV Entertainment Group selected the winners in collaboration with a humanitarian nonprofit organisation, Choose Love, which aids and advocates for refugees around the world.

Harry Styles, who was this year’s top nominee with seven nods, only took home one award — the best live category, which was reintroduced after a two-year hiatus because of the pandemic.

After selling out a massively in-demand ongoing concert tour, ‘Love on Tour,’ with 7 legs spreading over the course of 22 months starting on 4 September 2021 in Las Vegas, Nevada, finishing on 22 July 2023 in Reggio Emilia, Italy, along with wrapping up a 15-show sold-out residency at Madison Square Garden earlier this year, the 28-year-old pop phenomenon unquestionably earned the “Best Live” award, delivering the nonstop power-packed and entertaining live shows.

The much-awaited award night broadcasted across MTV’s global network in over 170 countries and on Pluto TV in select territories across the U.S., Latin America and Europe, and on Comedy Central in Germany. It will be available on Paramount + and Pluto TV globally, beginning November 14.

Check out the complete list of nominees, with verified winners below:

WINNER: The 2022 MTV EMA Generation Change award went to Ukrainian change makers Lina Deshvar, Anna Kutova and Anfisa Yankovina for fighting for the rights of those affected by the humanitarian crisis in the country.

Did you see your favourite artists winning this year at the 2022 MTV EMAs? Let us know by sharing your thoughts on Twitter at @CelebMix!