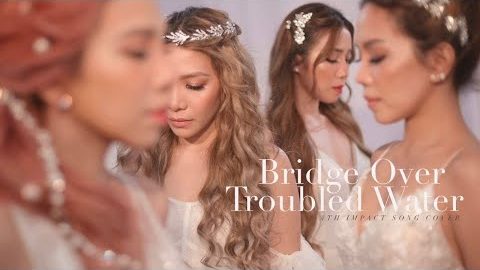 They’ve done it again, 4th Impact has shocked us all with their stunning voices by releasing a cover of Sohyang’s version of Simon & Garfunkel’s “Bridge Over Troubled Water”. These four sisters sure do not shy away from some of the hardest songs to sing, and they nail it every single time.

Big songs are starting to become 4th Impact’s signature covers, as their huge vocal range, impressive harmonies, and incredible runs allow them to deliver some unforgettable performances. In the past, they’ve conquered the likes of Queen’s “Bohemian Rhapsody“, Adele’s “Hello“, The Greatest Showman’s “This Is Me” and “Never Enough“, Sia’s “Chandelier“, John Lennon’s “Imagine“, Selena Gomez’s “Lose You To Love Me“, Lady Gaga’s “I’ll Never Love Again“, Demi Lovato’s “Stone Cold“, Little Mix’s “Power“, and Camila Cabello’s “Havana“, amongst many many others. In every single cover song that they release, they manage to blow us away every single time, but this cover of “Bridge Over Troubled Water” is totally next level!

The original version by Simon & Garfunkel has allowed the song to go down in history as one of the best songs in the world and it has won multiple awards. Then, in 2015, Sohyang performed her version of this song on popular South Korean TV show Immortal Songs 2 (also known as Immortal Songs: Singing The Legend) where she won the episode with the song. Her version is completely amazing with some incredible vocal runs and notes that only a few singers in the world are able to hit.

4th Impact are one of those incredible artists who can hit such notes. They are angelic throughout the number whilst showcasing their beautiful voices and their ability to hit those vocal runs. All four of the Cercado sisters have incredible voices and that’s what makes it so special when they launch into their harmonies, making this version of “Bridge Over Troubled Water” one of the best versions of this song we have ever heard.

The cover was released on their YouTube Channel with the visual taking us into heaven where 4th Impact are singing angels. Dressed as goddesses from head to toe, the girls look completely stunning as they sing “Bridge Over Troubled Water”. This is easily their best cover to-date!

Do not miss any 4th Impact news by subscribing to their Patreon where they keep their fans up to date. An official music video for “K(NO)W MORE” is apparently on its way, as well as their debut album, more cover versions, and a tonne of other amazing 4th Impact stuff!

What do you make of 4th Impact’s cover of Sohyang’s version of Simon & Garfunkel’s “Bridge Over Troubled Water”? Let us know on Twitter @CelebMix.