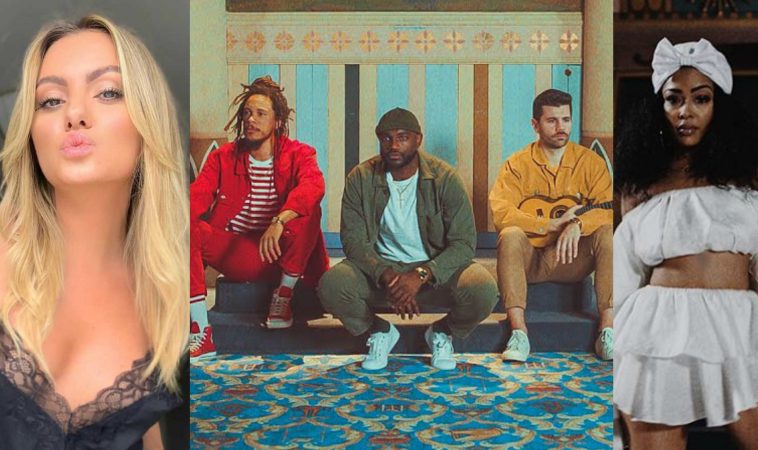 We have more new music from Alexandra Stan – granted it’s just her voice on the chorus but she makes the song – on RDGLDGRN’s new single, titled “Danger” which also features Nitty Scott. The song follows up RDGLDGRN’s single “Lower Eastside Blues 09”, Nitty Scott’s feature on The Polish Ambassador’s single “Mystic Matterz” alongside Zion I, and Alexandra Stan’s single release “Obsesii“.

RDGLDGRN (pronounced Red Gold Green) are a three-piece group consisting of Marcus Parham (Red), Andrei Busuioceanu (Gold), and Pierre Desrosiers (Green). They’ve released three studio albums and have worked with the likes of Dave Grohl and Pharrell Williams. Five of their tracks have over 1 million Spotify streams, “Doing The Most”, “Lootin In London” in collaboration with Angel Haze, “I Love Lamp”, “Runnin Away”, and “Power Ups”. They are certainly a group who is releasing music unlike anything we’ve heard to date and we’re excited to see where it’ll take them.

Featuring on the track for a full verse is Nitty Scott, real name Nitzia Scott, who went viral in 2010 with her freestyle rap over Kanye West’s song “Monster”. Since then she’s been rising in the music industry releasing singles, mixtapes, EPs, and two studio albums. She’s worked with the likes of Kendrick Lamar, Ne-Yo, Rah Digga, and Styles P. Each artist manages to stand out on this track and Nitty Scott makes her voice heard with her rap, proving to the world that they need to keep an eye on her.

Also featuring on this single is Alexandra Stan, unfortunately, she doesn’t appear in the music video and only contributes the two lines of the chorus, but she totally holds the song through it all. This Romanian star is best known for her worldwide hit single “Mr Saxobeat”; since then, she has been continuing her career by releasing awesome songs and collaborating with some big names including INNA, Daddy Yankee, Antonia, Mohombi, and Manuel Riva. She’s definitely someone to keep watching, especially since she’s already been a global success, and with her dedication and incredible vocals, she will surely do it again. She went to live in Los Angeles during 2018-2019 to work on new music and released “I Think I Love It”, which started a whole new era and saw her sign a new record deal with Universal Music Romania and MediaPro Music. Recently she released “Obsesii” which is doing well in her home country.

According to Spotify, the song has been written by Alexandra Stan, Andrei Busuioceanu, Marcus Parham, Nitzia Scott, and Pierre Desrosiers. As for the music video, it has been directed by Patrick Lincoln and King Green with Teddy Denton acting as director of photography. The visual sees RDGLDGRN and Nitty Scott performing the song.

The song is addicting, to say the least. Alexandra Stan’s two lines in the chorus captures us from the first second with a rolling vibe that doesn’t want to get out of our heads. Over the top of the awesome groovy backing track, we hear Pierre Desrosiers start his relax rapping painting the story of a dangerous girl who he likes a lot. This girl turns out to be Nitty Scott who calls herself “Danger” in the song, and she knows that she’s captured his attention. He knows she’s a dangerous woman but he just can’t help himself. Throughout, these two easily show off their artistry and they sing amazing lyrical rhyming lines that just add this sultry effect throughout. This track deserves a lot more traction because it’s catchy, groovy, and fierce.

What do you make of RDGLDGRN’s new single “Danger” which features Nitty Scott and Alexandra Stan? Let us know on Twitter @CelebMix.