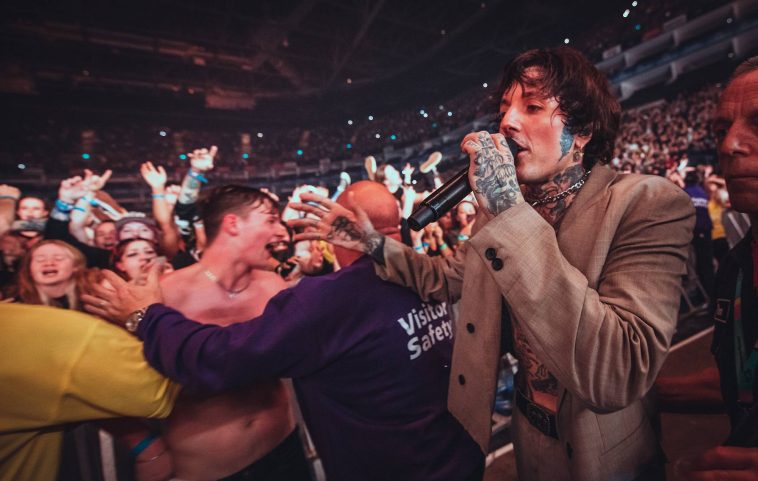 “After two years of not being on stage, to see you all still here is fucking special” Bring Me the Horizon frontman Oli Sykes told The O2 Arena, and it’s true. After COVID shut out one of the most intimate forms of enjoying music, seeing a sea of people all bound together for their love of Bring Me was an incredible moment.

Sunday 26th September saw the Sheffield rockstars close off their sold-out Post Human Tour. The band took to the stage of the UK’s most famous venue hot off the heels of their Number One album Post Human: Survival Horror, which tackled the emotions and mental toll that the current state of the world had on the band themselves. Now, almost 11 months after their release, the band gets to debut the tracks that resonated with their fans over the last 18 months live.

Over the years, Bring Me the Horizon have undertaken a sound evolution, bouncing from their death/metalcore days to pop-rock/electronic rock and becoming pioneers for their peers to feel confident experimenting. While some may have deemed their evolution them “selling out” to become mainstream, their constant strives to experiment and challenge themselves have paid off and secured them not only just critical acclaim and immense success but a place as a pioneer for rock artists globally.

Their ever-experimental nature is reflective in their stage presence too. Joined by phenomenal stage setups of a ‘cage’ lighting (only too fitting for the feelings of the last 18 months), and cyborg dancers, Bring Me the Horizon brought their everything to the stage, releasing 18 months’ worth of energy into a 90-minute set. Rock is known for being kept simple; the band on stage with a microphone and minor visuals but Bring Me the Horizon amped this up once again to deliver a performance that no other can.

Speaking before performing their latest ‘future emo’ single DIE4U, Oli told the crowd “Broken people fix broken people…you guys save my life every day” and this felt reflective of the atmosphere the entire night. Spanning from SURVIVAL HORROR back to SEMPITERNAL, the setlist kept the energy levels high and united. The crowd felt like a community that had not seen each other in a while and were brought together for the same reason; their love of BMTH.

The Sheffield rockers are miles ahead of any other act in the UK right now, and their slot at The O2 only cemented this. From their musical evolution being displayed to the set design and effort to visualise their creativity in every nook and cranny of the show, there is no other act quite like them around right now, which is why they remain the frontrunners and leaders of the rock scene.

For all the latest on Bring Me The Horizon, make sure you’re following the CelebMix account!