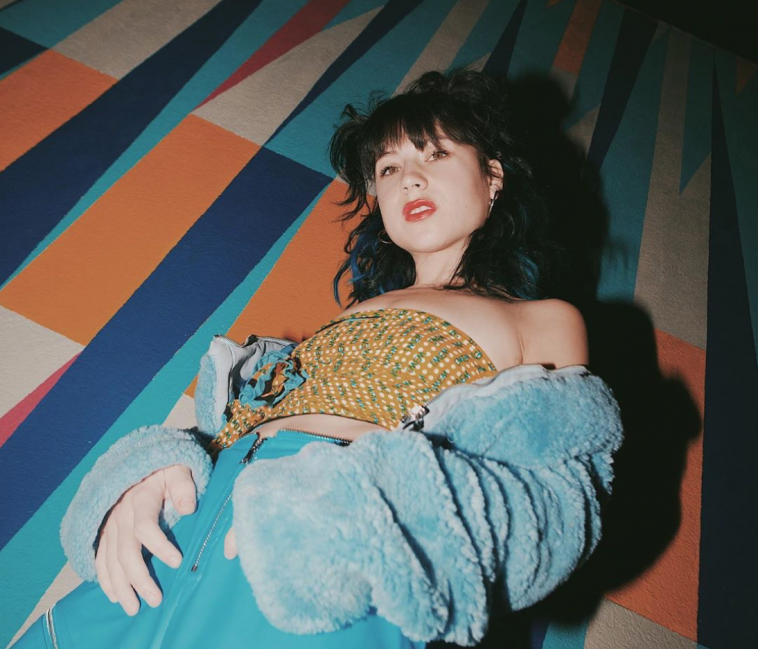 Known for their kicking choruses and larger than life frontwoman, you’d think KITTEN would be a band not cut out for life in quarantine. However, as latest glitching flick ‘My House’ goes to show, that’s far from the case. Chloe Chaidez chats to CelebMix about the track and staying creative at home, as well as all things Nasty Cherry.

“It’s been a rollercoaster ride,” Chloe Chaidez ponders on the current global situation, fresh from her latest Zoom meeting. “It’s been an emotional rollercoaster for everybody, I know I’m not alone in how I feel.”

Based in L.A. and moving in circles of exciting artists famed for their collaborative attitudes, such as Dorian Electra and Chaidez’s long-time friend Charli XCX, working in confined spaces isn’t something the songwriter is all too used to.”I’m a very social person. People always like to say how introverted they are but, you know what bitch,” she laughs, “I’m an extrovert and I know that about myself.”

When not writing music, the frontwoman admits to turning to cooking as a means of keeping busy. “I could open a restaurant,” she jokes. “I’m talking gourmet stuff… this week alone I made vegetarian meatballs which were really delicious. Mushroom, parsley, oregano, eggplant…”

If not cheffing, Chaidez has been cooking up tracks in her own studio. Dropping last week, ‘My House’ is an infectious take on the situation, mixing a nursery rhyme feel with big pop melodies.

“The track flowed very easily, it was very honest. It definitely has a childlike quality to it which was just naturally expressed. It was a pretty direct reflection of how I was feeling.”

Asked if being creative at the moment has been at all difficult at times, Chaidez nods to missing out on the usual music experiences which inspire her:

“Whether it’s relationships, someone who treated you like a dick, falling in love… those experiences I’ve really missed to inspire writing. You do get really beautiful moments with the people you are quarantined with that you might not have otherwise too.”

Chloe nods to unique moments like those in ‘My House’. The single is a new sonic direction from KITTEN, a band that have done it all since first releasing music all the way back in 2010. Most recently, the end of last year brought the Goodbye Honeymoon Phase EP, an acclaimed project which Chaidez had previously labelled “Avril Lavigne meets PC Music”.

An artist who thrives on being busy, Chaidez is also one of four Nasty Cherry members – the female-fronted band formed by Charli XCX and the name behind huge pop bangers like ‘Live Forever’ and ‘Music With Your Dad’.

“I think that even when it’s difficult [juggling two bands], I love it”, Chloe admits. “There’s been a couple moments in this quarantine when I’m doing both in one day and I feel like I’m in my zone, in a hectic, chaotic but fun space.”

Recent headline shows for Nasty Cherry saw raucous U.K. pop fans fill small venues as they continue their promising first steps towards prominence. “There’s nothing like the feeling you get after playing a show,” Chaidez says whilst fondly thinking back before COVID-19. “You’re sweating and you talk to people in the audience. I’ve made so many lifelong friends at shows – it’s something that connects you, it’s really important.”

In the meantime, the singer has kept busy playing online sets and attending virtual events such as Club Quarantine which she praises as “very forward-thinking”. “It’s definitely a way to keep the community strong and it feels nice to still be connected to a movement.”

An artist who thrives on stage, whether it be with KITTEN or Nasty Cherry, Chloe Chaidez can’t wait to be back gigging again, although admits it could be a long way off yet. In the meantime, she’ll see this all blow over by cooking up big quarantine hits and tasty veggie dishes.

‘My House’ is streaming now.

Are you a KITTEN fan? Riding the Nasty Cherry rise? Let us know @CelebMix on Twitter.