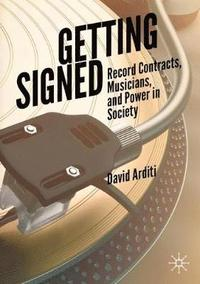 Occasionally on CelebMix, we delve a little deeper into the music industry rather than just giving you the latest news on your favourite artist. This one of those times. A few months ago we were lucky enough to connect with David Arditi who is a music industry researcher. He offered to send us a copy of his upcoming book, Getting Signed: Record Contracts, Musicians, and Power in Society.

We obviously jumped at the chance to read it as we love hearing and learning about the behind scenes stuff within the industry even if we don’t necessarily publish content about it.

Most people are unaware of how record contracts operate at the same time they see celebrity musicians living lavish lifestyles, they believe record contracts result in wealth—this is a product of alienation. Alienation between different musicians, musicians and fans, and musicians and the recorded product allows this ideology to function.

Getting Signed: Record Contracts, Musicians, and Power in Society is an absolutely fascinating read. As it talks about things that affect all your faves from Little Mix, Louis Tomlinson, BTS to Kanye West.

“Record contracts have been the goal of aspiring musicians, but are they still important in the era of SoundCloud? Musicians in the United States still seem to think so, flocking to auditions for The Voice and Idol brands or paying to perform at record label showcases in the hopes of landing a deal. The belief that signing a record contract will almost infallibly lead to some measure of success? the “ideology of getting signed,” as Arditi defines it?is alive and well.

“Though streaming, social media, and viral content have turned the recording industry upside down in one sense, the record contract and its mythos still persist. Getting Signed provides a critical analysis of musicians’ contract aspirations as a cultural phenomenon that reproduces modes of power and economic exploitation, no matter how radical the route to contract. Working at the intersection of Marxist sociology, cultural sociology, critical theory, and media studies, Arditi unfolds how the ideology of getting signed penetrated an industry, created a mythos of guaranteed success, and persists in an era when power is being redefined in the light of digital technologies.  “

It highlights the pitfalls of signing with a label. something every recording artist has dreamed of at some point. Backing up its points clearly with examples, which even those with little knowledge of the music industry will be able to understand why some label contracts are highly exploitative and one-sided, really only benefiting the label. George Michael, Prince and Michael Jackson are all artists mentioned within the book who like many others have been vocal about the more negative terms and clauses within their own recording contracts.

Getting Signed: Record Contracts, Musicians, and Power in Society is extremely well researched by David Arditi. You can tell from the first page that the entire project was a labour of love and something he is passionate about. Something you can tell he meticulously worked on for years.

Getting Signed is split into two distinct parts.

It starts with the basics on recording contracts, sort of an “everything you need to know guide.” He then goes more in-depth focusing on and explaining various clauses and elements that make up a recording contract and why/how they can be used to exploit artists. Especially ones who are desperate to be signed and have little or no prior experience of how the music industry operates.

Every recording contract is unique to the artist that signs it, Each having clauses in that others may not, depending on the plans the label has for that specific individual artist or band.

One of the most intriguing out of a wholly fascinating and enlightening read was David’s explanation of Artist advances and how they work.

Before an artist receives any royalties, they must recoup (i.e., repay) their advance
on their part of the royalties. In simplest terms, if a band has a $500,000
advance and makes $1 from the sale of an album, they would need to sell 500,000 albums (the RIAA certification for a gold album) before they earn any royalties. Meanwhile, if a label makes $1 in royalties for every album sold, they would recoup at albums (the label’s dollar plus the band’s dollar), profiting $500,000 at the point when the band recoups.

It will cause you to question and massively side eye everything you read about what an artist earns.

The second part of the book highlights case studies and observations of label contracts at work. The conclusion sums up the ideology behind signing with a label and offers up alternate ways in which labels and the wider industry could be a fairer and more wholesome industry for artists, by starting a wider conversation about copyrights, record contracts, and musician labor,

If you like many fans have ever been fustrated by how you feel your faves are treated when it comes to releasing an album or are part of a fandom and just want to know more about recording contracts then this a fascinating, eye opening place to start your education.

You can get a copy of Getting Signed: Record Contracts, Musicians, and Power in Society here.

Let us know your thoughts over on @CelebMix!