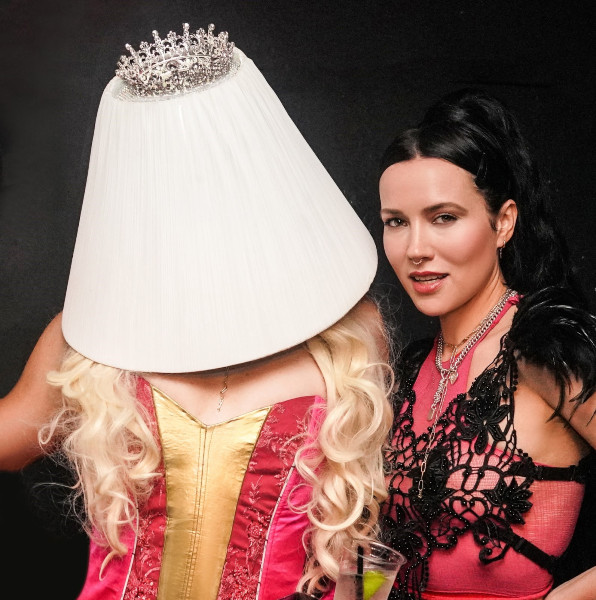 Along with churning out chart-topping dance music, DJing wearing a lampshade mask, and sharing the stage with artists like Post Malone and Migos, Sh*tty Princess created her couture line of fashionable clothing – Sh*tty Princess Pink Label.

On her part, Queeny King grew up in a notorious cult, followed by signing with a major label and becoming the daughter-in-law of Cher. In 2020, she made her stunning entry onto the music scene with “Freakshow,” followed by launching her clothing line of denim-wear and tops.

CelebMix spoke with Sh*tty Princess and Queeny King to find out more about the personas behind the music, how they got started in music and their creative process.

What inspired your new song, “Make Me Baby?”

Queeny: Just two girls having fun while on the road between LA, Vegas, and NYC.

Princess: It was a playful and energetic EDM/pop tune we wrote on the road from our tour travels back and forth from Vegas to LA to NYC. It’s a perfect record for the nightlife scene in Vegas, LA, and NYC. Really, it’s a perfect record for everyone trying to have a fun and a saucy little evening.  This song brings the journey full circle from tour travels, and we are excited to share the culmination of the finished product with our queens and kings. We even performed it in NYC at NYFW ’21 before it was totally finished because everyone was just so excited.

How did the two of you come to connect and work together?

Queeny: we met at the YouTube studios in Los Angeles. We hit it off straight away! We are really good friends, and we love hanging out and we always have so much fun!

Princess: Yep, Youtube Creator Studio. My photographer that day insisted we meet. Some of my favorite footage of us was filmed the day we met; you can check it out in the lyric video when it drops on December 10th. Funny story about us on that day we met; one of my vocalists left YouTube early because she was heading to Vegas for the Cher concert. I FT the vocalist and queeny, so two cool chicks could connect. They clearly hit it off and Queeny offered my vocalist, Katie, a closer seat to Cher’s show just if she wanted. I’m like… Katie, I dunno who this chick is but she’s cool. Turns out Cher is Queeny’s mother-in-law, and she lives at Cher’s house.

Any plans for another collaboration in the future?

Queeny: I hope so!! We have so much fun working together!

Princess: Yes of course! I feel like I will do a remix of her super cool new solo music in ’22.

Queeny: Growing up in the cult I did kinda comes hand in hand with singing. Been singing since I was 3. I ended up getting signed by a major label which saved my life.

Princess: I just wanted to pick one of the hardest industries and work 24/7 to make enough to maybe cover the LA rent. I think music picks you.

Princess: Lyrically, Taylor Swift and Bo Burnham for obvious reasons. Ironic because that’s a mouth full for even a pop-leaning EDM record. However, I try to incorporate heavy and thoughtful lyrics into my EDM records… despite analytical trends telling me to repeat stuff. My fans are smarter than that. Sonically, Kanye, Dre and Timbaland give me that most forward motion with differentiating variations every 16-32 bars in their beats.

Queeny: Grimes for sure, Doja Cat.

Princess: I draw inspiration from processing deep internal emotions in short phrases because I can’t quite get my emotions out in full thoughts and sentences. Every song is about a personal experience of myself or a close member working directly on that particular song with me.

Which comes first, the lyrics or the music?

Princess: Both. My initial concepts are lyrics, but my Spotify playlists are inspo beats that move me forward. I generally have several songs going at once. Some are lyrics, some are music, and some are both.

Princess: New music, I have three December releases. Concept music, I’m from the Midwest so we have some country and rap influences on my electronic sound in ’22. I also have some dope exclusive merch drops with local LA clothing labels. I will be touring the country this year starting with a west coast leg, this live tour side of our industry is coming back slower than I hoped. I’m open to show bookings! What cities do my kings and queens want me?!