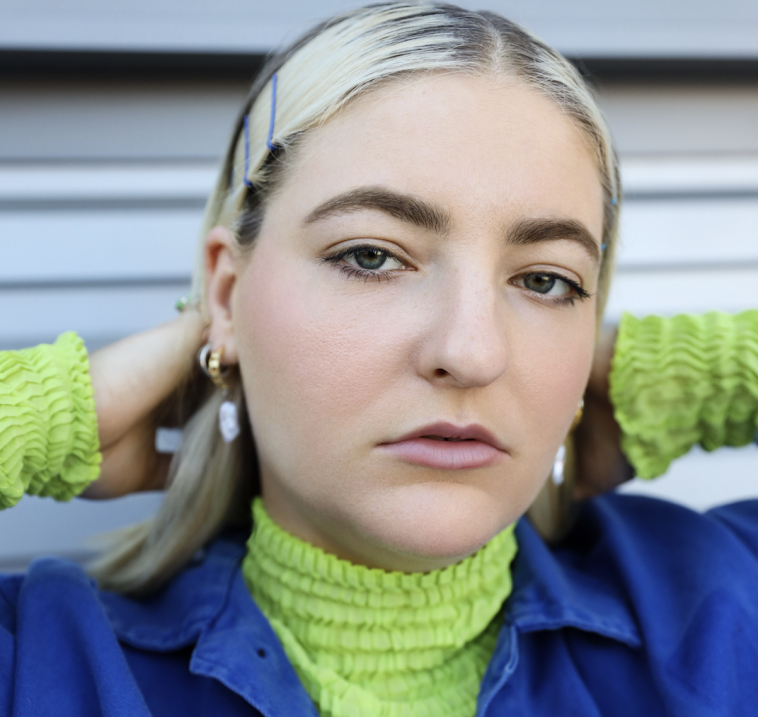 Bringing supersonic electro-pop to the world is JORDI UP LATE with her addicting new single “TO BE YOUR FRIEND”, which is also accompanied by an unforgettable music video. This follows up her most recent single “Hoax” which has quickly become her most-streamed Spotify single.

JORDI UP LATE, real name Jordan Tager, is a rising LA-based producer, singer-songwriter and visual artist. She attended the Rhode Island School of Design (RISD) and graduated with a Bachelor of Fine Arts, and returned to her home-state of Los Angeles, where she started working on her passion for music, as an independent artist, whilst continuing to use her degree by creating all sorts of illustration and design including animated music video and stop-motion projects on top of focusing on fine art projects such as ceramics and paintings (some of which she makes available as merch). She started learning to produce as a teenager, becoming self-taught at the age of 15 and continued to work tirelessly to improve her skills in singing, songwriting, and producing. She is set to release a debut EP and a debut LP in the near future. Her ability to create and see music in a different light, through colour and shades and shapes and waves really allows her to craft music into her own masterpiece, and her single releases to date truly showcase just that. Not many producers can make claim to that, and it certainly shows how talented JORDI UP LATE is, and she’s set to be a future superstar on the EDM scene. She recently signed to WRKSHP record label which was started by Che Pope (Eminem, Jay-Z, Kanye West).

“‘TBYF’ is about experiencing the dichotomy of resentment and gratitude after falling for the ‘idea’ of someone and facing that your disappointment lies in your own expectations of a person who was incapable of loving you before meeting you,” JORDI UP LATE said about her new single. “In the end, I gave the benefit of the doubt by extending friendship only to feel my hand slapped away and taken for granted. Though I am resentful in the dark melodies of the synth, and at times in the lyrics, I remind myself of my own power in singing directly and unapologetically to this person. I speak plainly that loving one another was impossible considering his lack of confidence and that loving him was only worth it for the lessons learned.”

Watch the music video of “TO BE YOUR FRIEND” by JORDI UP LATE here:

Written by Elizabeth Maniscalco, Jordan Tager, and Michael Vastan, “TO BE YOUR FRIEND” is an explosion of electronic-pop with undercurrent themes of indie, folk, and trance, creating a rhythmic addiction that we can’t quite get enough of. JORDI UP LATE has passionate and gritty vocals which have sweet tendrils making it personal and honest and opening up to the listeners. The lyrics delve deep into a one-sided friendship that was so not worth it and this producer-singer-songwriter impresses with emotionally deep raw vocals in the verses. The backing track completely shines, wrapping around her vocals, creating rhythmic beats and distorted rhythms, adding to the dark depths bringing a finality to this so-called friendship.

The music video is a pure performance visual that allows JORDI UP LATE to express her feelings for this song, delving deeply into the emotion of how this ex-friend makes her feel. You can see the hurt in her facial expressions as she sings this song. A variety of scenes are displayed including a scene which sees her lying down in a puddle of water, a scene at a table, and a scene which sees her performing on top of a neon set of stairs with an archway.

Stream “TO BE YOUR FRIEND” on Spotify right now:

“TO BE YOUR FRIEND” by JORDI UP LATE is available to download and stream right now, across all platforms, via WRKSHP Inc and distributed by Vanice Music. Look out for her upcoming debut EP, rumoured to be released towards the end of this year, as well as her debut LP which is set to be dropped sometime in 2023.

Let us know what you make of JORDI UP LATE’s “TO BE YOUR FRIEND” single and music video, on Twitter @CelebMix.