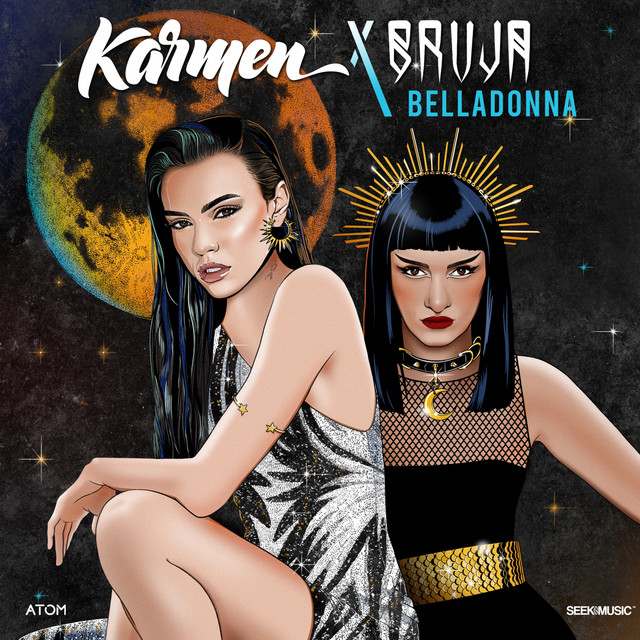 This week saw Karmen team up with BRUJA for the new single “Belladonna”. This is set to do well as Karmen has just finished being a contestant on the Masked Singer Romania where she came third, dressed as a lion. This follows up Karmen’s single “Bam Bam” and BRUJA’s single “India”.

Karmen, real name Carmen Simionescu, daughter of well-known Romanian singer and actor Adrian Minune, has been going strong in her home country of Romania ever since she signed with Global Records who has INNA, Antonia, Carla’s Dreams, Delia, Irina Rimes, and The Motans, on its roster. Her 2018 track, “Lock My Hips“, became a total hit in Romania, ranking in the Top 5 of Romania’s Radio Airplay Chart and on Romania’s Top Airplay 100, peaking at number two, and hit number one on the Romanian TV Airplay Chart for two weeks. Her other singles include her addictive debut “You Got It”, follow-up “Minte-Ma”, her collaboration with Achi on “Viciul Meu”, the unforgettable track “Shake It“, and last year’s single “Play Me“. This year has seen her release “Punjabi” and “Bam Bam” under the Atom label. She was also revealed to be the Lion on the first season of the Masked Singer Romania, coming in third place.

As for BRUJA, real name Maria Mizgoi, she is a rising Romanian artist who has had amazing growth over the last couple of years. Her most-streamed track on Spotify is her feature on Nane’s album track “Nada” alongside Amuly, with her single “Ia Loc” trailing behind. She has gained over a million views for her “Ia Loc” music video and has worked with the likes of Irina Rimes, Lu-K Beats, and Brasov. This collaboration with Karmen is bound to introduce more people to her awesome music and allow her to gain the attention she clearly deserves.

According to Spotify, this song was written by Alexandru Pelin, Krishane Murray, Maria Teodora Mizgoi, Octavian Ioachim Petre, and Vlad Lucan, whilst it has been produced by the latter two songwriters. As for the music video, the concept came from BMABID, with Raluca Netca acting as director and Alex Chitu acting as director of photography, video production also came from Arkomo Film.

Watch The Music Video To “Belladonna” By Karmen & BRUJA Here:

Once again, Karmen impresses giving us a track that is marketable worldwide, fusing together international sounds and fusing them all into this Eastern European dance track. This is totally her current style and we are loving how she’s set a unique and interesting musical path and we hope that it results in an album as this song works well with the likes of “Punjabi” and “Bam Bam“. Her vocals are on fire from the first few seconds whilst BRUJA adds a unique Romanian rap verse towards the end of the song that matches rhythmically and emotionally. A brilliant song that we can’t stop listening to.

The accompanying music video relates well with the track especially since the lyrics consistently suggest that the love Karmen is feeling is making her high, so it’s great that it is set within an asylum. Karmen acts as a nurse whilst we watch from a male perspective who, when he takes drugs, envisions a whole different scenario, where the nurses are dressed up sexily and sultry. During all the scenes, Karmen and her backing dancers bat out brilliant dance choreography, fully showing how amazing she is as an artist. BRUJA jumps in for her verse, looking a bit like Mona The Vampire as she’s casted as a fellow-inmate at the asylum, which she acts out brilliantly. This video is amazing in every way with the concept reminding us of Lady Gaga’s “Marry The Night” and we cannot wait to see what the future brings these two incredible Romanian artists.

“Belladonna” is available to download and stream right now, via Atom and Roton records.

Let us know what you make of Karmen & BRUJA’s new single and music video, “Belladonna”, on Twitter @CelebMix.