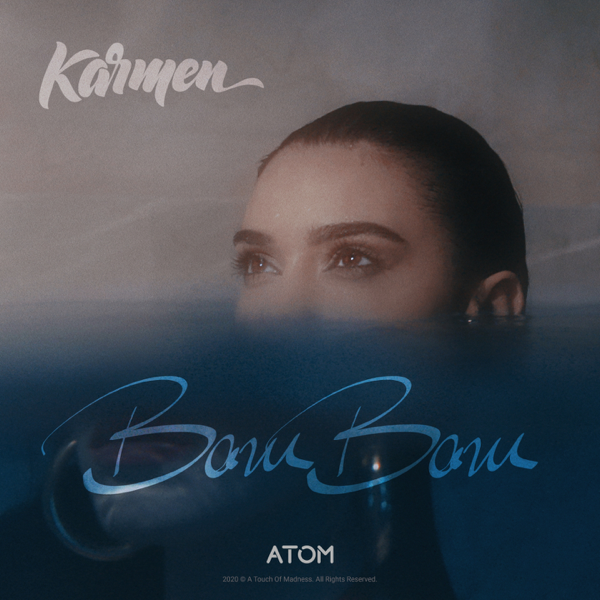 We have more music from Karmen this year, this time a single titled “Bam Bam” and it’s just as addicting as her previous hits. This follows up her previous track release “Punjabi”.

Karmen, real name Carmen Simionescu, daughter of well-known Romanian singer and actor Adrian Minune, has been going strong in her home country of Romania ever since she signed with Global Records who has INNA, Antonia, Carla’s Dreams, Delia, Irina Rimes, and The Motans, on its roster. Her 2018 track, “Lock My Hips“, became a total hit in Romania, ranking in the Top 5 of Romania’s Radio Airplay Chart and on Romania’s Top Airplay 100, peaking at number two, and hit number one on the Romanian TV Airplay Chart for two weeks. Her other singles include her addictive debut “You Got It”, follow-up “Minte-Ma”, her collaboration with Achi “Viciul Meu”, the unforgettable track “Shake It“, and last year’s single “Play Me“. This year has seen her release “Punjabi” and now “Bam Bam” under the Atom label.

According to Spotify, the song has been written by Petre Octavian Ioachim, Vlad Lucan, and Yasmeen Semaan, whilst it has been produced by Vlad Lucan. As for the music video, it has been filmed using a small team by BMABID, with Raluca Netca acting as director, Alex Chitu acting as director of photography, and Daria Georgescu handling the styling.

The song is an upbeat number but with Karmen’s signature sound all over it, with Eastern European melodies and vibes. As usual, her vocals are on-point throughout and it’s clear she has connected with the song and enjoys singing it. The lyrics touch upon being in a relationship with a guy who makes her feel alone and isn’t usually around and always out and away from her. The song is highly relatable to many people right now as the COVID-19 pandemic has people in quarantine, on lockdown, and away from the people they love.

The music video takes inspiration from the lyrics giving us a pure performance visual which sees Karmen on her own, alone, outside what could be her own home. We see her on top of a roof, sitting on a chair, lying down on the grass, and floating in a pool. Her fashion is on-point throughout too, we especially love her yellow, mustard-coloured, suit jacket and trousers, as well as the fiery-red dress she wears in the swimming pool.

“Bam Bam” is available to download and stream right now, via Atom.

What do you make of Karmen’s new single and music video, titled “Bam Bam”? Let us know on Twitter @CelebMix.