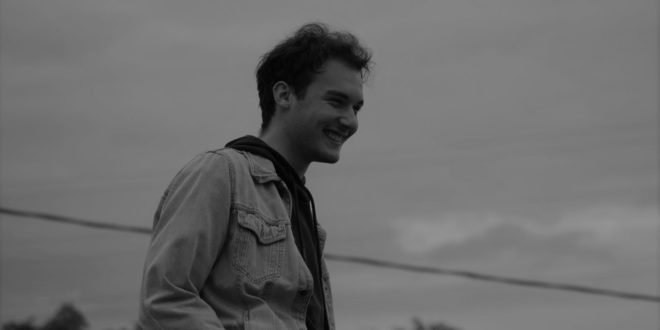 Released earlier this week is the brand new single from Leroybroughtflowers, titled “Woodlark”. It’s a sombre indie concoction that is sure to strike a chord or two with every single listener. The song follows up Leroybroughtflowers’ cover of The Four Seasons’ single “Beggin'” which was made popular by Madcon and, most recently, Måneskin.

Leroybroughtflowers, real name Dimitrios Daras, is a 21-year-old singer-songwriter Coventry, UK-based artist who originally hails from Thessaloniki, Greece. A massively diverse artist, he has dipped into a variety of genres over the past few years including the likes of pop, R’n’B, jazz, hip-hop and indie, the latter of which this single is enveloped within. Fusing the difference between the likes of Lana Del Rey, Mac Miller, Damian Rice, Daughter and Tom Odell, this all-around capable artist is just starting to showcase the musical depths he is prepared to take his music. With a whole range of new music set to be dropped this year, including his debut mixtape, Leroybroughtflowers is definitely going to be one of the rising stars we need to keep an eye on.

Written by Dimitrios Daras, “Woodlark” is an unstoppable indie-folk force that has a tranquil melodic sound that melds beautifully with Leroybroughtflowers’ vocals. The track is a progressive piece that drifts slowly before making an impactful emotional punch during the second half of the song when he pours his heart into his vocals. By the end of the song, Leroybroughtflowers has not only taken you on a journey but has also left you speechless as he makes sure you not only never forget the song for the rest of the day, but also identify with its lyrics and understand the meaning of the song.

Talking about the track, Leroybroughtflowers said: “‘Woodlark’ is a coming-of-age ballad inspired by leaving my hometown and my first love. The protagonist has accepted his life as a wanderer, and his inability to stay for his loved ones or express his love. It is the bittersweet feeling of wanting to forget but also wanting to remember everything. It is a love letter to a life of endless wandering and teenage love.”

“Woodlark” by Leroybroughtflowers is available to download and stream right now. It has been independently released by the artist himself. Look out for his debut mixtape which will be out later this year.

Let us know what you make of “Woodlark” by Leroybroughtflowers on Twitter @CelebMix.