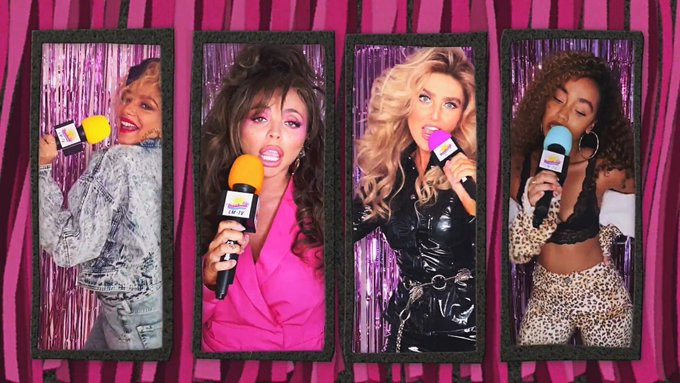 Whilst their original shoot was cancelled due to the current global pandemic, that hasn’t stopped Little Mix from releasing a brilliant music video for their latest single ‘Break Up Song’!

The visual sees felt versions of the girls host their very own breakfast show, LM-TV (Good Morning Break Up). Each member has their own slot, with Leigh-Anne in charge of the break-up news, Jesy forecasting the weather, Perrie shaping up the country with her morning motivator fitness show and Jade turning into Mystic Meg with her daytime destiny segment.

The chorus also features a ‘live performance’ from Little Mix, with the girls performing from their respective homes. Sporting iconic 80s looks, complete with big hair and makeup, Little Mix look phenomenal in their outfits.

Jesy dazzles in a pink suit dress ensemble, Jade is rocking the double denim with a ‘Choose Love’ tee, Perrie looks sensational in a leather get up whilst Leigh-Anne slays in a leopard print two-piece that Scary Spice would be proud of.

The video is full of personality, with Jesy showing off a Jackie magazine with her mum as the cover girl, whilst she later blows off Perrie’s wig in a hilarious moment. There’s also a heartfelt moment where a felt version of Jesy strips off due to the heat, whilst felt Leigh-Anne looks on and holds her heart with pride. The group even find the time to perform their ‘Break Up Song’ choreography, which has been a growing trend on TikTok since the song was first released.

Whilst this isn’t quite how Little Mix had originally imagined the music video for ‘Break Up Song’ would pan out, there’s no doubt that this is a phenomenal lockdown offering from Leigh-Anne, Perrie, Jade and Jesy. In fact, we’d go as far as saying that this is one of our favourite LM visuals to date! Round of applause for these girls.

Check out the fantastic music video for ‘Break Up Song’ below.

Since the release of ‘Break Up Song’, Little Mix have treated us to an acoustic version of the track as well as remixes from Nathan Dawe and Steve Void. The track is also their 15th Top 10 single on the UK Official Singles Chart.

What do you think of the ‘Break Up Song’ video? Let us know your thoughts on Little Mix and their felt-tastic visual on Twitter @CelebMix