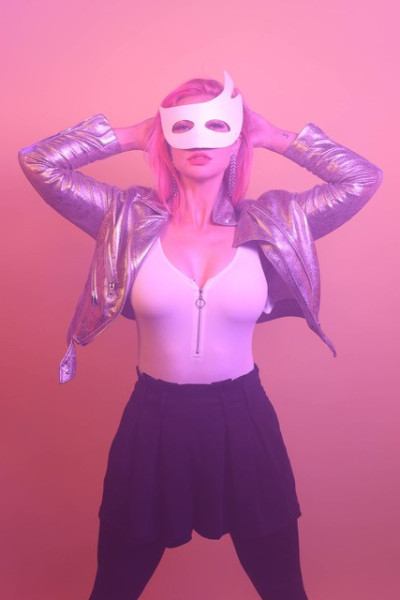 Electro-pop artist Madam Bandit, aka Mindy Gledhill, releases her single/music video, “Gin & Tonic,” an appetizer for her upcoming EP, Punch You In the Face, which probes topics such as sexual liberation and feminism.

Talking about the song, Madam Bandit shares, “My husband loves a good gin and tonic. In fact, it’s his favorite cocktail. It’s somewhat strange to be writing these words because we were married as young Mormons who held fundamental beliefs about abstaining from alcohol. That belief system fell apart for us as we entered into our adulthood and when it did, the wonderful world of mixology fascinated us. I think of us like a gin & tonic — on our own we are two very different drinks, but together we are quite something.”

Originally from NorCal, Madam Bandit was the eighth of nine children. Her family, members of an early American-Christian sect, was immersed daily in music. Married as a teenager, motherhood took precedence, although she sustained a desire to become a singer-songwriter.

She decided to achieve both: her religious duty and her dream. By the time she turned 22, she was the mother of two sons and laying down tracks for her debut album. She followed with multiple albums under her given name, Mindy Gledhill, including placements with major brands and television shows, along with millions of streams and video views. She also worked with EDM superstar Kaskade on four songs.

“Gin & Tonic” opens on percolating colors riding a tough, tight rhythm topped by Madam Bandit’s posh, delicious vocals, a blend of riot grrrl savors, and hints of femme fatale, imbuing the lyrics with bewitching flavors, at once avant-garde and exotic.

Madam Bandit has it going on! Fresh, buoyant washes of electro-pop and tantalizing, nuanced vocals make “Gin & Tonic” an earworm.