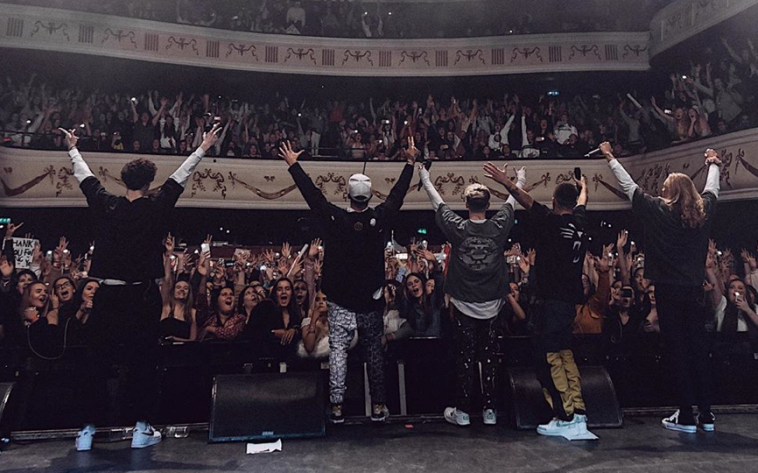 “We’ve been through a lot of drama, we could genuinely put these up and sell 20 tickets”, Sonny reflects at one point in the film. The drama he’s speaking of is 2019’s changing of band members which saw Sonny and Harper Dark join RoadTrip.

Viral EPs, sold-out tours and new records all still made 2019 a RoadTrip year to remember, but as the five-piece begin to put things into place for Shepherd’s Bush, the documentary highlights a whole new ballpark with a lot on the line.

Taking fans through the process of putting on a show in the months preceding, RoadTrip lay it all bare in a heart-on-the-sleeve documentary. Candid interviews on the group’s story from zero to heroes punctuate trips to the studio, sets of music videos and dance rehearsals. Andy, Rye, Brooklyn, Sonny and Harper reflect on losing past members, welcoming the new and what the new era means for RoadTrip in the access-all-areas exclusive.

Clips from the archives track RoadTrip’s journey from a close-quartered one-bedroom flat alongside their manager, having to shower at a local gym to moving out into a house big enough to fit all the members and a dedicated team of videographers. It’s a success story that fans are already fond of, brought to life like never before.

In its reflecting, ‘Before The Show’ also points to the exciting times ahead for the group, at their best point ever. At one point, cameras take you into a studio session alongside producer Charlie Drew as the band take reigns over their sonic direction for the White Label EP, prioritising music ‘that we would listen to’ – shortly after we see the drop being added to hit single ‘Me and You’.

After the success of Shepherd’s Bush, even bigger and better times are ahead. As ‘Before The Show’ shows, RoadTrip are a band prepared to go the extra mile to pull off the extraordinary.

‘Before The Show’ is streaming now on Netflix, directed by Conner Foley and produced by Alex Millichamp.

Have you watched RoadTrip’s ‘Before The Show’ documentary? Let us know @CelebMix on Twitter!