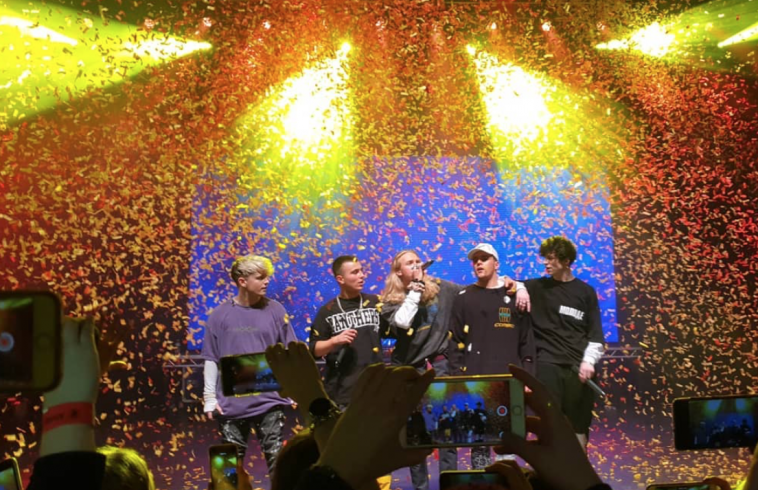 It’s 2 pm on a Sunday afternoon in London and snaking around the corner from the capital’s iconic Shepherd’s Bush Empire is a queue of 2,000 RoadTrip fans – the biggest headline crowd the group have ever pulled in.

A one-off afternoon in celebration of the group’s past five years and a first chance to hear the White Label EP after release on Friday, it’s a landmark day for Andy, Rye, Brooklyn, Sonny and Harper.

Jumping from viral hits to deep cuts and recent releases, fans are treated to the band’s trademark high-energy show on the biggest production yet. With full visuals, slick choreography and over an hour-long set, the group rise to the occasion. Bursting on stage to the plucky ‘Something About You’, smirks on all five boys’ faces, this moment has been a long time coming.

At one point during the show, the band recall frequent drives past Shepherd’s Bush Empire growing up, and whilst sell-out UK shows have regularly seen crowds flock to see the group, there’s a sense that Sunday afternoon in London is a whole new level. The viral YouTube covers are dropped from the setlist for a full show of original RoadTrip material, punctuated by tracks from that White Label EP.

Releasing last week’s EP with promises of their best and most confident work to date, RoadTrip deliver on those when bringing it to life. ‘Me and You’ is a single as catchy as they come, ‘Understand’ is a real highlight of the day and ‘Hero’ is a certified fan-favourite already. Suddenly RoadTrip are bidding for more than just happy-go-lucky flicks. White Label is a fresh pop sound ready to take on any other Top 40 competitor – and the 2,000 strong ‘Roadies’ in Shepherd’s Bush, some of whom have travelled from the continent, are clearly on board.

The band’s fanbase won’t let any of the classics that have seen RoadTrip propel themselves to this stage die though. The tongue-in-cheek ‘Miss Taken’, rattling ‘No No No’ and sing-a-long ‘Tokyo Hotel’ are met with resounding sound. Elsewhere, tracks from the Number 1 Dynamite EP bulk out an impressive set.

A venue hosting names such as BRIT Award winner Celeste, chart-topper Lennon Stella and rock icon Alanis Morissette in the coming months, RoadTrip are now a name up there too. Perhaps even more impressive, the independent band have built from the ground up to get themselves here.

Towards the end of the day, Andy takes an emotional moment to come forward and thank the friends and family up in the gods, his fellow bandmates on stage and the RoadTrip fanbase for coming on the journey, adding his wish to play the Shepherd’s Bush Show every day.

Though as Shepherd’s Bush Empire empties onto the London streets, confetti still falling from the ‘After the Show’ finale, there’s no reason venues can’t keep getting bigger. With their best live show to date and most exciting material arriving in just the last week, there’ll be many more days like this to come for RoadTrip.

Did you catch RoadTrip at Shepherd’s Bush Empire? Let us know @CelebMix on Twitter.