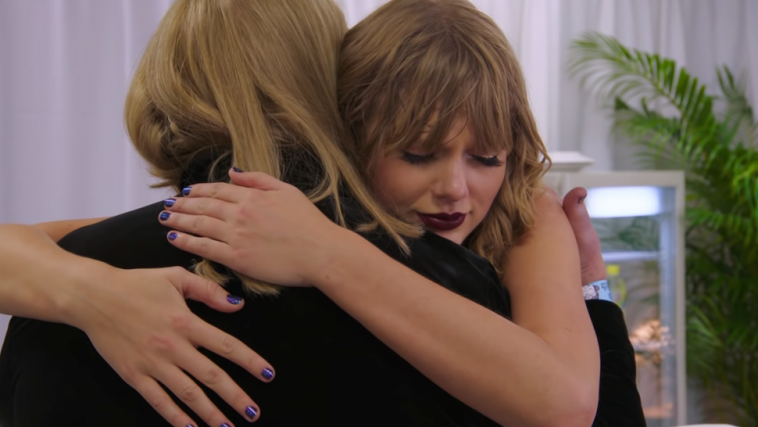 Taylor Swift has just released her Netflix documentary Miss Americana following her life between the Reputation era and her latest chart-topper Lover. Miss Americana is a journey built up of political tension, loneliness and the struggles of being a woman in the music industry but ultimately, follows the tale of discovering true happiness among the chaos.

(Warning: this will contain spoilers)

The Netflix special opens with Taylor discussing how she had the aspiration of being approved and praised by the world when she made her debut in 2004. While on the outside, Taylor’s life has looked like a dream; multiplatinum albums and singles, more awards than you can count on 10 sets of hands and an army of fans who support her everchanging style. But the documentary opens a door into a darker place that shows Taylor more humanised and vulnerable than ever before.

Personal struggle is at the centre of the film, whether it be in her career or private life. Following her 2009 MTV VMA win being upstaged by Kanye, Taylor speaks on how she felt the world was booing her rather than Mr West and began a mission to prove that she was worthy of her place in the music industry. After climbing to become the cream of the crop in pop music and winning the Grammys ‘Album of the Year’ with 1989, Taylor expressed how she felt she had no one to share this win with and felt incredibly lonely.

Her loneliness continues after her mum Andrea’s cancer diagnosis and how crushing and worrisome this felt for Taylor. Potentially losing anyone you are close to is absolutely soul-crushing but having your parent’s life be at risk is something that nobody can ever prepare you for, especially living in the public eye. The loneliness was only furthered after round 2 of Kanye West vs Taylor Swift after his song Famous included the line ‘I made that b***h famous’, which kickstarted the #TaylorSwiftIsOverParty trend. After this scandal, the movie pans to Taylor sobbing in her room to her mother telling her how “it gets so loud sometimes” and pushes her to disappear for a year to escape it all.

The private struggles only continue to be exposed as Taylor touches on her disordered eating. Taylor’s body has been at the centre of many media outlets ever since she first shot to stardom and Swift opens up about this media shaming. She admits that seeing pictures of herself online had previously left her starving herself and working out too much if she thought she looked too big, pushing her into a dark place. Thankfully, this reflection has now changed and she stated that she tells herself “we don’t do this anymore” if she feels herself slipping back into that mindset.

A major talking point of Miss Americana is Swift breaking her political silence and truly expressing her beliefs and values. Her Democratic alignment is mentioned on multiple occasions, with Taylor stating that she was told by multiple industry professionals to be ‘a nice girl’, ‘not force your views on people’ and to ‘not be like the Dixie Chicks’, who received much flack for voicing their political opinions as country singers. Taylor’s passion for politics shines through immensely as she gets teary-eyed when defending her right to post about her politic stance to her parents and label executives. Taylor was always an ally and wanted to state her views but was never given the go-ahead to do so.

While the majority of the documentary is focused on the dark areas of Taylor Swift’s life, ultimately the film illustrates the process of finding her ultimate happiness during these times. It is no secret that Taylor has been in a relationship with British actor Joe Alwyn but this has been kept incredibly private about their romance. After leaving the public eye for a year and allowing her romance to blossom with Joe, Taylor Swift stated that she felt a new type of happiness in her life, one “without anyone else’s input.” In a montage of intimate home video clips of her playing Joe her tracks ‘Call It What You Want’ and ‘Gorgeous‘, the happiness is radiating from Miss Swift that was only truly ever there when she was performing on stage. The happiness reflected in her creating Reputation and Lover, two albums that were Taylor no longer seeking validation from others but the music and lyrics that she wanted to make on her terms.

Miss Americana ends with one powerful sentence that sums up the global stars life. “After 13 years of constantly feeling like I was misunderstood, knowing that everything that happened was going to turn into this moment is f*****g awesome.”

Let us know what you thought of Miss Americana by tweeting the CelebMix account!