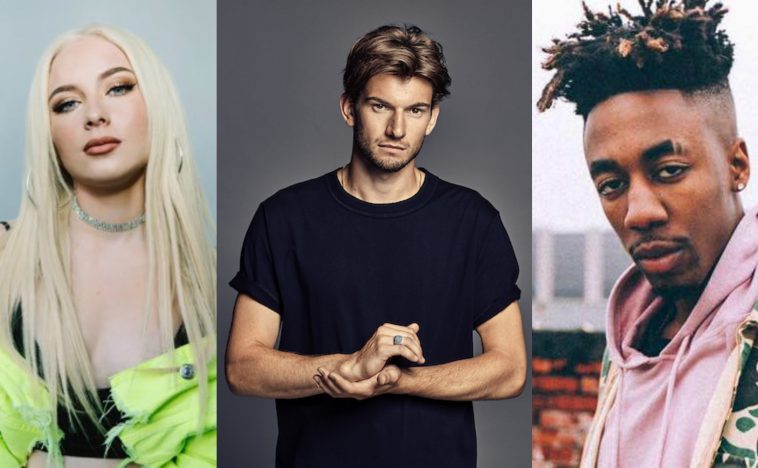 We have an absolutely brilliant new song from HAYES and Wiktoria, titled “Fuck This Place Up”, which features Famous Dex. We’re telling you that this will easily become stuck in your head. We did miss Wiktoria at Melodifestivalen, this year, but if she keeps releasing songs as amazing as this one then we will be ecstatic for her. This single release follows up HAYES’ release of the Cazzette remix of his song “Now Or Never”, Wiktoria’s single “We Don’t Talk“, and Famous Dex’s feature on Reggie Mills’ song “Racks On Me” alongside Rich The Kid.

HAYES is a Norweigan artist whose real name is Thomas Hayes. He is best known for his song “Where I Belong” which has racked up over 3 million Spotify streams, and he has gone on to collaborate with many other artists including hitmakers Nico & Vinz and Mugisho. This single release marks his first collaboration with a female artist and a Swedish artist no less. He’s quickly making his name known which definitely makes him one to watch.

Wiktoria collaborates with HAYES on this single, her full name is Wiktoria Johansson. She’s best known for her attempts to represent Sweden at the Eurovision Song Contest in 2016, 2017, and 2019, through their national selection show, Melodifestivalen. In 2016, she placed fourth with the song “Save Me”. In 2017 she sang “As I Lay Me Down” and placed fifth. And then, last year, she sang “Not With Me” which came sixth. We love all the songs she has released thus far, and this new one is one of our favourites. We believe the future is bright for Wiktoria.

Also on this track is US rapper Famous Dax, whose real name is Dexter Gore Jr.; he features on the track, giving that extra special uniqueness if it hadn’t already captured you. He is best known for his songs “Pick It Up” featuring A$AP Rocky and “Japan” which have both charted on the US Billboard Top 100, at numbers 54 and 28 respectively. His debut album, Dex Meets Dexter, also charted on the US Billboard 200 Albums Chart at number 12. HAYES said he was a fan of Famous Dax and had to get in touch, with the help of his A&R team.

According to Spotify, this song has been written by Christian Sol, David Atarodiyan, Dexter Tiewon Gore Jr., Emma Elizabeth Dittrich, Jonny Stemp, Jørgen Lund Karlsen, Sigurd Evensen, Stig Espen Hundsnes, Thomas Hayes, and Truls Dyrstad; whilst it was produced by Thomas Hayes, Truls Dyrstad, David Atarodiyan, and Christian Romslo. This upbeat number is ready to tear the place down, and totally needs to be a hit – we reckon DJs should jump on this and add it to their playlists/setlists.

The chorus starts immediately with Wiktoria’s incredible hard-hitting vocals, proving that she’s perfect for dance numbers, before impressing vocally on the verses, adding emotional power with fierce notes that we didn’t even know she could hit. The chorus really shines throughout and is bound to get stuck in one’s head all day long. HAYES impresses with the backing track, bringing a deep EDM vibe mixed with underground beats that are full of various styles and genres – on paper, it doesn’t work, but this is pure fire to our ears, ready to set alight dancefloors around the world. This track would not only stand out amongst various club tracks but will certainly stand the test of time. Famous Dex comes in with a rap like no other, totally taking us deeper into the club. We so want to be at the place they are singing about!

“Fuck This Place Up” is available to download and stream right now, via Epic Oslo which is a division of Sony Music Entertainment Norway.

What do you make of Wiktoria teaming up with HAYES for the single “Fuck This Place Up” which features Famous Dex? Let us know on Twitter @CelebMix.