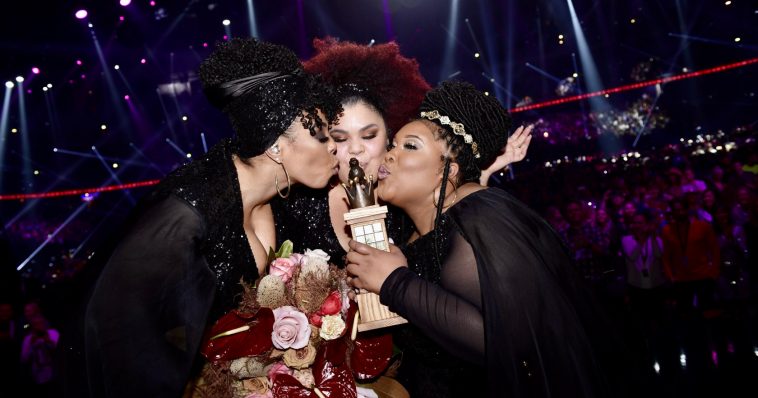 After six weeks, the Swedish national selection show for the Eurovision Song Contest 2020, titled Melodifestivalen 2020, has crowned its winner. The Mamas, with their song “Move”, came out on top in one of the closest point scorings ever seen, with just one single point between first and second place. They will be jetting off to Rotterdam, the Netherlands, to represent Sweden at the international singing competition.

This was the closest-ever Melodifestivalen scoring in history. The Mamas and Dotter were head-to-head after the international juries had completed voting, both gaining 65 points. In the televote round, The Mamas gained a total of 72 points, and Dotter needed the same to win the contest – we’re not entirely sure what the tie-break rule is but it was clear that Dotter needed the same amount of points to win… But she lost out on one point, gaining 71 points in the televote. We’ve never been so far on the edge of our seat, ever before; such a close battle to win, we couldn’t believe it. However, we adored how The Mamas received the Melodifestivalen trophy from John Lundvik, since they were a part of his Eurovision 2019 performance, and so – technically – this is the second time in a row that they’re off to Eurovision.

The Melodifestivalen Final was hosted at the Friends Arena in Stockholm, Sweden on 7 March 2020, presented by David Sundin, Linnea Henriksson, and Lina Hedlund. Introducing the show was last year’s winner John Lundvik, but unlike other years, he didn’t perform on stage, and instead, we were greeted to an opening number from the hosts, who introduced each of the 12 acts in an iconic musical number adding interesting lyrics to the well-known classical piece from 1875, “In The Hall Of The Mountain King” composed by Edvard Grieg – such a creative number! Then the hosts returned during the interval for the song “Det du ser är Sverige”. On top of that, we also watched a performance from Babben Larsson who sang her own interpretation of last year’s winning song, “Too Late For Love”.

The Mamas’ performance was fierce, confident, strong, and emotional. It’s clear that the public and the juries liked both their song “Move” and Dotter’s song, especially considering how close the scoring was. We also loved both songs, and we simply adored Melodifestivalen, this year. The Mamas upped their game from the Semi-Final, giving a powerful rendition of the song, and we all know that Sweden is going to do very well, once again, in the Eurovision Song Contest.

As mentioned, by just one single point, Dotter came second with her awesome song “Bulletproof”. This is one catchy number that is sure to get stuck in one’s head. The Mamas scored a total of 137 points, and Dotter scored a total of 136 points – so very close! Dotter also brought some light performance with her, just like she did in the Semi-Final, giving us a show we simply wouldn’t forget; it did very slightly distract us from her song but it also added something different to the Final. The Mamas song “Move” is currently at number seven on the Swedish singles chart, titled Sverigetopplistan, and Dotter is at number four.

In third and fourth place was Anna Bergendahl with “Kingdom Come” and Hanna Ferm with “Brave”, respectively. Both numbers were upbeat and intriguing to watch. Anna Bergendahl had some male dancers surrounding her and gave one powerful vocal that explained why she won Melodifestivalen 2010, whilst Hanna Ferm gave an addicting pop number with two walls of sombre light. “Kingdom Come” received a total of 107 points and has currently peaked at number 10 on Sverigetopplistan; as for “Brave”, it received 94 points and currently peaked at number five on the Swedish chart.

In fifth place was Anis don Demina with his song “Vem e som oss”, which was a complete upbeat number, totally addicting the more you heard it and he absolutely nailed the rap verses. This was the third time hearing it and he sure knows how to put on a show, we also loved his clothing choice for the final. He scored a total of 82 points, and his song charted at number three on Sverigetopplistan. And in sixth place was Paul Rey with his chillingly emotional song “Talking In My Sleep”. We’re not sure why this gives us goosebumps and totally touches our heart, but it always does. Powerful and strong we’re glad to see it score average with a total score of 68 points. It has peaked at number nine on the Swedish charts.

Just following behind Paul Rey by one point was the amazing Felix Sandman with his extremely important track “Boys With Emotions”. If we had to choose one song that hit us emotionally, it was this one. It’s such a brilliant track, that it deserves to be a worldwide hit due to the message alone. We congratulate Felix Sandman for deciding to tackle such a vital topic in this world, and displaying it perfectly with his backing dancers. Unfortunately, it has only peaked at number 36 on the Swedish charts, but we hope that it rises this week.

Watch Felix Sandman Perform “Boys With Emotions” At The Final Of Melodifestivalen 2020 Here:

In eighth and ninth place were Robin Bengtsson with “Take A Chance” and Victor Crone with “Troubled Waters”. Both these acts have previously been to Eurovision, so they sure know how to perform, so it was surprising to see that they didn’t score highly. Robin Bengtsson had no stage theatrics and instead showcased his voice with the song “Take A Chance”, which scored 63 points; whereas Victor Crone went the other way creating a water projection on the floor which he reacted with as he performed “Troubled Waters”, scoring 57 points. Robin Bengtsson’s song has peaked at number 20 at the moment on Sverigetopplistan whilst Victor Crone’s song charted at 26.

Watch Robin Bengtsson And Victor Crone Perform Their Songs “Take A Chance” And “Troubled Waters” At The Final Here:

In tenth place was Mariette with “Shout It Out”, in eleventh place was Méndez featuring Alvaro Estrella with “Vamos Amigos”, and in twelfth place was Mohombi with “Winners”. Mariette shined with her pop-ballad, scoring 51 point, and has charted on Sverigetopplistan at number 73. Méndez feat. Alvaro Estrella brought the party to Melodifestivalen 2020, getting everyone up with their Latin vibe, scoring 40 points, the song charted at number 61. As for Mohombi, he managed to make “Winners” shine with his voice and the bigger stage production with some dancers and light pillars of different heights in a circle around him; he scored just 26 points and has charted on Sverigetopplistan at 43.

Watch The Melodifestivalen 2020 Final Performances Of Mariette With “Shout It Out”, Méndez Feat. Alvaro Estrella With “Vamos Amigos”, And Mohombi With “Winners” Here:

The show was absolutely incredible, and the 12 Final performances proved the high calibre of Swedish acts, and so it comes as no surprise as to why Sweden always does well at the Eurovision Song Contest because they have an epic national selection show.

The ending was an incredible moment, not only did the scoreboard have us on the edge of our seats, but seeing John Lundvik pass over the trophy to The Mamas, who were his backing singers at the Eurovision Song Contest 2019, was a total moment that we will never forget. The Mamas then performed their song “Move” again on stage, showcasing pride and happy tears.

That’s it for Melodifestivalen 2020, we cannot wait to watch this show again next year, but first, we have the Eurovision Song Contest 2020, in May to look forward to, which is bound to be epic. Can The Mamas bring the show back to Sweden? To do so they’ll have to score more points than the other 40 acts that are competing and representing their own countries.

The Eurovision 2020 acts that have been announced so far are Blas Cantó for Spain, Hooverphonic for Belgium, VICTORIA for Bulgaria, Sandro for Cyprus, Vincent Bueno for Austria, Arilena Ara for Albania, Tornike Kipiani for Georgia, Jeangu Macrooy for the Netherlands, Vasil for North Macedonia, Tom Leeb for France, Benny Cristo for the Czech Republic, Eden Alene for Israel, Stefania for Greece, Montaigne for Australia, Samanta Tina for Latvia, Diodato for Italy, Destiny Chukunyere for Malta, Roxen for Romania, THE ROOP for Lithuania, Ulrikke Brandstorp for Norway, Athena Manoukian for Armenia, Alicja Szemplinska for Poland, James Newman for the UK, Samira Efendi for Azerbaijan, Ana Soklic for Slovenia, Ben Dolic for Germany, Uku Suviste for Estonia, Daði og Gagnamagnið for Iceland, Natalie Gordienko for Moldova, Ben & Tan for Denmark, Gjon’s Tears for Switzerland, and Go_A for Ukraine. The remaining countries are expected to reveal their acts and songs in the coming days.

What do you make of the Swedish act for the Eurovision Song Contest 2020, The Mamas with the song “Move”? Let us know on Twitter @CelebMix.