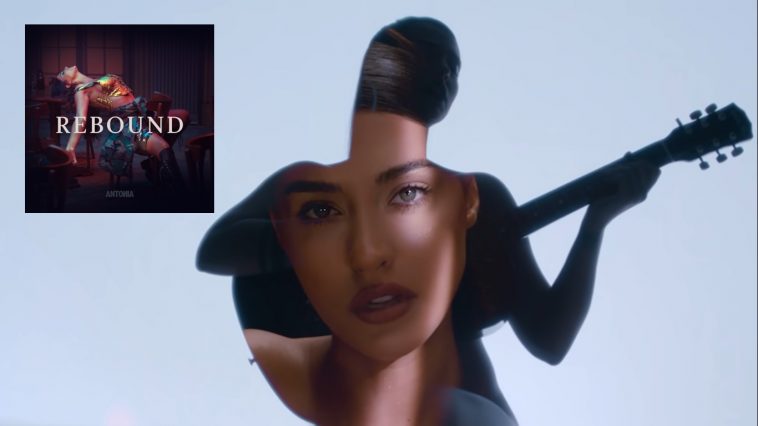 We’ve got a new awesome single and music video by Antonia, titled “Rebound”. This is one highly personal and emotional song that Antonia delivers exceptionally. We’ve been listening to this on repeat for the past couple of days. This follows up her previous single “Como ¡Ay!“, the music video of which had us laughing in stitches and is truly unforgettable and so it’s no surprise we included it in our top five Antonia music videos. How is she going to follow that up?

Antonia, full name Antonia Iacobescu, is a Romanian singer who hit internationally on Tom Boxer’s single “Morena”, she later followed that up with a number one single in her home country, titled “Marabou”. She’s been building up her career in her country by releasing amazing singles and collaborating with the likes of INNA, Alexandra Stan, Pitbull, Connect-R, and Achi. She also collaborated with Alex Velea, her partner, on her own single – where he was an uncredited vocalist – “Iubirea mea” and on his single “Sahara“. She continues to release brilliant tracks and hit it big with the release of “Matame“, at the end of 2018, which featured Erik Frank. We’re waiting for the day she releases her second studio album, as it’s been five years since she dropped her debut album.

According to Spotify, this song was written by Emily Kocontes, Jayson DeZuzio, Madalin (MADS) Rosioru, and Zev Troxler, whilst it has been produced by Madalin (MADS) Rosioru. As for the music video, that has been directed by Bogdan Paun of NGM Creative, with Alexandru Muresan acting as director of photography, whilst Loops Production handled the production side of the visual. Cristina Poszet and Andra Marta handled the concept of the video.

Watch The Music Video To “Rebound” By Antonia Here:

Following up “Como ¡Ay!” is no short feat, but Antonia has decided to release a stripped-back English pop-ballad which really shows a different side to her compared to her most-recent singles. Connecting with this song in every way, Antonia impresses vocally with this track showing off her range and her ability to flood a song with emotion. We reckon that this song would stand out at one of her concerts because of the exceptional way she would deliver the track on stage. Rhythmically catchy, “Rebound” is one special song that we can’t stop listening to. Antonia’s voice is beautiful throughout this track and she gives us chills every time we hear this song.

Within the music video, Antonia is a total star. It’s just her in front of the camera. The main scene sees her looking sexy as she performs the song in a bar, drinking vodka shots, suggesting she’s drowning her sorrows of a lost relationship. The bar is also usually where a rebound may happen too. The video also has product proposal sponsor from Kreskova Vodka. Other settings sees her in what looks to be a warehouse and outside the warehouse building, which is displayed in black and white, and there’s also a topless scene where Antonia is holding a guitar in front of her whilst another clip of her is projected onto her body. She’s stunning in every single scene and her acting skills are on point throughout, giving the viewers her emotion of longing for a lost love.

“Rebound” by Antonia is available to download and stream right now, via Global Records.

What do you make of Antonia’s new single and music video “Rebound”? Let us know on Twitter @CelebMix.