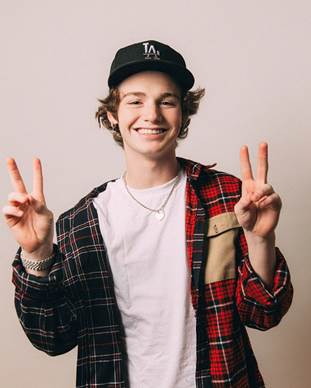 On Monday night when CelebMix chats with payton the internet is in disarray at the outage of Facebook and Instagram.
Obviously, it’s the first thing we have to ask the star, who rocketed to fame on social media as a youngster.
“Honestly, I didn’t even know it was down until an hour ago,” payton says. It’s hard to believe the 18-year-old, who boasts 4.8 million followers on Instagram, wasn’t aware of the social media meltdown.

payton’s oblivion is poignant. This isn’t the fresh-faced social media star of yesteryear anymore – the Georgia-born teen now spends more time alone with a guitar than scrolling the apps.
That’s a shift in attitude payton is aware of too.
He says: “People believe in me for my music now and I feel like I can push my creativity more. It definitely lets me create more out the box.
“People understand the vision and it’s not like I’m here for one time.”
When the star released debut single ‘Love Letter’ in April 2020, a stripped-back ditty that allowed him to test the waters, some might have questioned payton’s desires to switch from social media sensation to singer/songwriter in his own right.
Fast forward 17 months and payton has proved all those naysayers wrong, latest single ‘WHAT I NEED’ has racked up nearly 100,000 streams after a couple weeks on Spotify alone.

That track is the latest taste of a payton sound that has grown in confidence and direction.
Speaking to CelebMix back when ‘Love Letter’ was released, the singer namechecked Machine Gun Kelly and Post Malone as influences.
Now, whilst those inspirations are still plain to hear, it has to be said that payton has carved out an indie-pop sound of his own.
“I’ve definitely had a lot of time to find what I like making, the little sounds I like,” payton says.
“I’m still heavily influenced by those guys but when I go in the studio now I know what I want to hear.”
Having spent large parts of 2021 on tour, payton adds that live sets have helped him hone his sound too.
“This last tour was great practice for getting out and being comfortable live,” payton reflects.
“I didn’t mess too much with the visuals and the experience of the set. I more messed around with the feeling and the songs to get an idea of what I want to do and how to do it.”
A humble head on grounded shoulders, payton is clearly aware that this is just the start and revels in learning day by day.
Nonetheless, the star has big aspirations and when asked about what the future holds, is quick to get excited about talk of a bigger project.
“I have this project I’ve been trying to make happen for a while,” he says.
“Everyone tells me to take my time and don’t rush it but I want to get this project out, I want to drop something more than a single.
“I just got to figure out the direction of what it’s going to be. As soon as I get that tightened up, there’ll be a bigger project.”
We’re ready when you are, payton.
‘WHAT I NEED’ is streaming now.

Are you a payton fan? Let us know @CelebMix on Twitter.