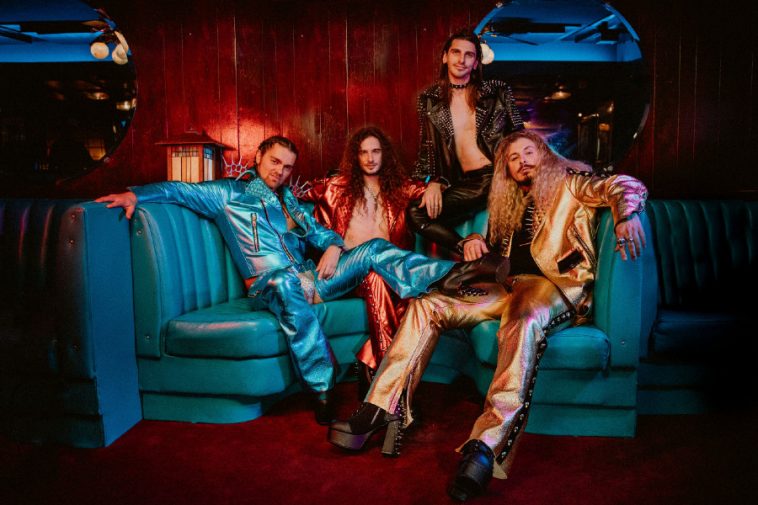 Talking about the song, Hot Crazy shares, “The inspiration of the song was to write something that made everyone feel comfortable with themselves no matter who they are, and to portray that message in a fun and lighthearted way.”

The genesis of Hot Crazy took place during the pandemic when bassist Robby Creasy went back to his hometown Phoenix to get away from L.A. for a couple of months. While there, he went to see his high school friend, guitarist Jordan Ziff, who plays with Ratt and Marty Friedman. The two talked extensively about various musical concepts.

In July of 2020, Jordan trekked to L.A. with material to work with Robby. Vocalist and friend Carl Biehn was invited to listen. Carl liked what he heard and started writing lyrics for the music. For the next six months, they wrote and recorded. The band’s lineup was completed, when Jordan discovered Jake Dick (drums), through a friend.

“Manly In Heels” opens on Queen-like flavors, and then revs up on sleazy guitars reminiscent of Motley Crue. Glowing vocals, a la the Beach Boys, add radiant tones and depth as Bieh’s slight twangy voice imbues the lyrics with grand, flamboyant timbres.

The video, which initially opens in a bar, and then shifts to the band performing on stage, features beaucoup leather, lots of bling, gorgeous women, visual pizzazz, and theatrical enormity, i.e., it’s at once dazzling and bravura.

With “Manly In Heels,” Hot Crazy melds the best aspects of classic rock, rococo images, and high-flying vocals into a captivating audio-visual experience.