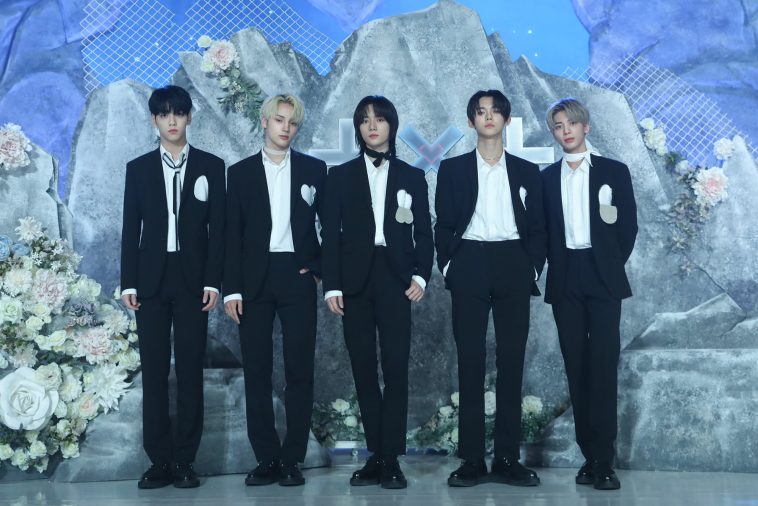 Tomorrow x Together has just released their second full-length album The Chaos Chapter: FREEZE, and we got all the behind-the-scenes discussions during the global press conference.

0x1=Love Song, the pop rock lead single challenges the deep intense feelings of love. Soobin described the first time hearing the song as a moving moment and stated “it was a real WOW moment (hearing it for the first time).” The title track also features lyrics from global superstar RM from BTS, who came to pen the track as Bang PD (HYBE/BigHit Music CEO) was struggling during writing the track.

Taehyun told the press that when initially debuting in Tomorrow x Together, the members were just thrilled to be able to sing and perform. But now, two years into their career they are heavily focused on participating in all other areas more, which is evident in the credits on the album b-sides.

Soobin holds writing credits on Ice Cream, where he began mind-mapping all ideas relating to the topic of the song and constructed lyrics based off of this. While Beomgyu used Balance Game as inspiration to pen the track “What if I had been that PUMA”, which juggles deciding between two scenarios.

Additionally, Taehyun co-wrote the track No Rules, which he stated was relatable for everyone experiencing the COVID-19 pandemic. Yeonjun, who co-wrote Frost, revealed the song brings a new charm to TXTs discography.

HueningKai explained the album as “stories that only TXT can tell…(they) interpret the stories of teenagers in (their) own way.”

It is no secret that Tomorrow x Together has an immense pressure on them, due to their fellow labelmates being BTS, but TXT have already achieved so much. They became the first 4th generation KPOP group to debut on the Billboard 200 chart and have already made a name for themselves globally. So, what do TXT want to achieve with this new era?

Soobin expressed how he hopes for them to win first place on Korean music shows for The Chaos Chapter: FREEZE era but most importantly, he hopes MOAs (the fandom name) can enjoy their performances.

The Chaos Chapter: FREEZE is available worldwide right now. For all the latest on Tomorrow x Together, make sure you’re following the CelebMix account!