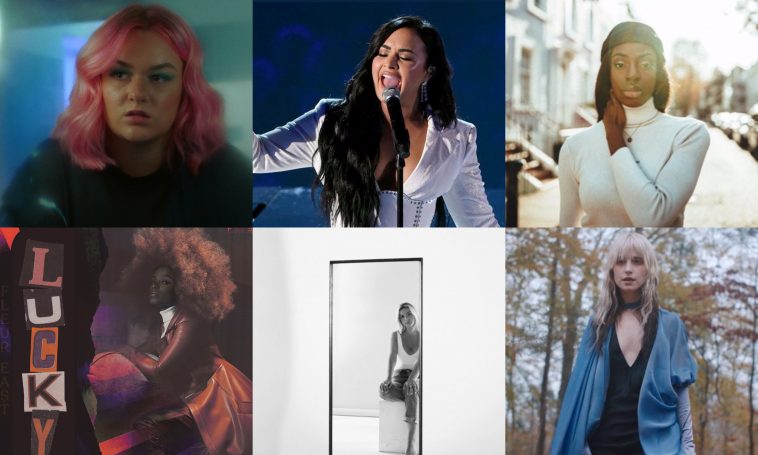 It may only be February, but so far 2020 is serving us well when it comes to new music, with the girls in particular pulling out all the stops.

In the past few weeks alone, the likes of Halsey, Dua Lipa, Meghan Trainor, Selena Gomez, Kesha, and Louise have all dropped brand new music which we can’t get enough of.

However, this is only just touching the surface. Here at CelebMix, we’re here to shine a light on six more female artists who’ve recently released new songs!

Rising star Cat Burns has just dropped her latest single ‘Fool In Love’. Kicking off the new year with another self-penned offering, the track is a relatable ode to an unhealthy and selfish relationship which you can’t bring yourself to turn your back on. Named as one of our ones to watch for 2020, there’s plenty more in store from Cat over the coming months and we cannot wait to hear it!

After making her comeback with a sensational performance at the 2020 GRAMMY Awards, vocal powerhouse Demi Lovato has released her new emotional new single ‘Anyone’. Demi revealed that the track was written just four days before she suffered an overdose in July 2018, and therefore looking back it almost seems like a cry for help. However, fast forward to 2020 and Demi is back and stronger than ever. This is without doubt her most personal release to date, and her vulnerability and openness is truly inspiring.

After making us shimmy last year with her bop ‘Size’, which featured on the Debenhams Christmas advert, Fleur East is back with her infectious new release ‘Lucky’. The feel-good track is taken from her forthcoming new album Fearless, which is due for release in March. The songstress will also be heading out on her first ever UK headline tour this April!

Grace rose to fame after competing on the 2017 series The X Factor UK. Wowing the audience and judges with her original music, the songstress finished in second place and since then we’ve patiently been waiting for more new music from her. Just this week, Grace released her new single ‘Invisible’ and it’s a stunner of a song which sees the 23 year old bare her soul about what life was life after her time on the show.

After making her solo debut just a few weeks ago with ‘Simmer’, Paramore front woman Hayley Williams is back with another incredible release. ‘Leave It Alone’ picks up where ‘Simmer’ left off and is a delicate release which Hayley revealed was written during a period of intense family trauma. The track is taken from her forthcoming debut album, Petals For Armor.

The X Factor UK 2015 winner Louisa is back with a beautiful new song called ‘Like I Love Me’. This body positivity anthem is a relatable release which encourages us all to love ourselves no matter what as we’re beautiful just the way we are. On social media, Louisa described the song as “a celebration of our bodies and souls and what’s beneath the skin” and we couldn’t love her more for it.

Which was your favourite track out of these new songs? Let us know on Twitter @CelebMix