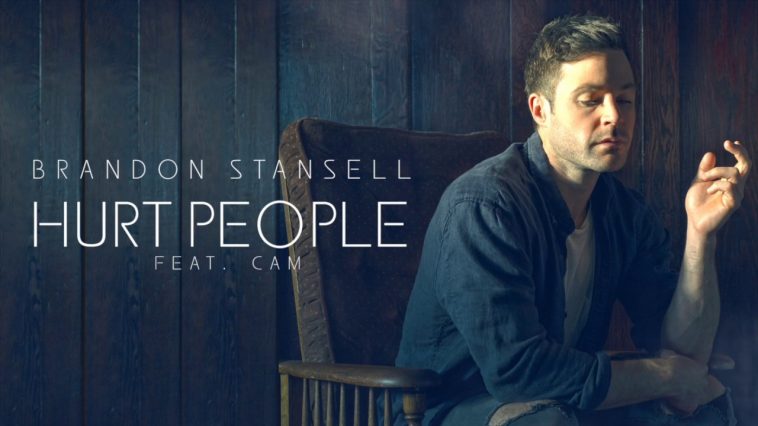 In promotion of his brand new EP Hurt People, Brandon Stansell has released a brand new single, this week, of the same name, which features female country superstar Cam. This follows-up Brandon Stansell’s single “I Just Want You (To Be Happy)” and Cam’s single “Redwood Tree”.

Brandon Stansell has been building his career in country music and he’s been gaining fans from the minute he released his Kickstarter campaign, to the release of his debut album “Slow Down“, and to his awesome singles including “For You” which starred Eureka O’Hara in the music video and “Hometown“ which was a fan favourite from his latest album and he also dropped a personal but inspiring LGBTQ+ music video alongside a three-track single release, as well as a fan-inclusive lyric video for the song. He is continuing on his new era with an upcoming EP titled Hurt People, and he also has a Patreon account which allows his fans to help him make more music, so make sure you subscribe for exclusive content and access to his new music, first.

As for Cam, full name Camaron Ochs, she is a well-known female country artist who made it big in 2015 with the song “Buning House”. Since then, she’s gone on to release two studio albums, subsequent singles, a Grammy nomination, headlined a number of tours, and collaborated with the likes of Diplo, Train, Travie McCoy, Vince Gill, and Roy Orbinson. Her latest single was released just a week and a few days ago, titled “Redwood Tree” and we’re excited to see what she releases next.

According to Spotify, this song has been written by Brandon Stansell and Cole Citrenbaum, whilst it has been produced by Nick Goldston. It contains one of our favourite lyrics we’ve ever heard “Hurt people hurt people“, and Brandon Stansell really makes an impact with those words, singing them with such integrity that it gives us chills – it sure will be lyrics we’ll never forget. A pure country song at its finest, Brandon Stansell impresses with his vocals, whilst painting a narrative with the lyrics he sings. The words hit our hearts as Brandon Stansell digs down deep to tell us his story and where he’s come from, it’s unapologetic and full of raw-honesty that takes us on an emotional journey.

The lyrics start off with his mother’s story during the first verse but then delves into his story of coming out gay to his parents. There’s a whole lot of hurt around this song and is bound to touch the hearts of so many, as it’s relatable and extremely real. Thank you, Brandon Stansell, for this song, the story behind it, and how you inspire the world with your positivity, your determination, and your openness. We really cannot stop listening to “Hurt People” on repeat.

“I’ve always connected with country music for its storytelling, but for the LGBTQI+ community — we are often told not to tell our story,” he says of the single. “Though I don’t believe a person has to be queer to find themselves in the lyrics of this song, ‘Hurt People’ is one of those untold stories.”

“I hope this song provides listeners of the genre a sense of representation that they may not often experience,” he adds.

“Hurt People” is available to download and stream right now. Don’t forget, for exclusive news, updates, tracks, and so much more, subscribe to Brandon Stansell’s Patreon.

What do you make of Brandon Stansell’s new single “Hurt People” featuring Cam? Let us know on Twitter @CelebMix.