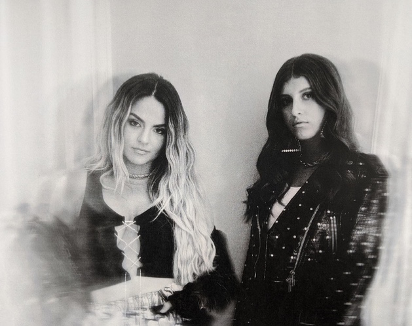 It’s been two weeks since Lindsey Lomis dropped her powerful new single “Slow Motion” featuring JoJo and we’re still obsessed with the track. Their voices just work so well together. It follows up Lindsey Lomis’ single “Bones” and JoJo’s empowering single “The Change”. This track appears on Lindsey Lomis’ brand new EP, titled In The Madness, which was released yesterday.

Lindsey Lomis is a rising female singer-songwriter who was born and raised in Nashville, Tennessee. She released her debut EP, Chapter I, back in January 2019 which led to her signing with Altadena and Warner Records. She’s garnered almost 2 million Spotify streams for her song “Simple Love” and she’s also received praise from some of the biggest stars in the music industry. We reckon she’s one to watch in the next couple of years.

As for JoJo, real name Joanna Levesque, she is best known for her hit singles in the 00’s with the likes of “Leave (Get Out)” and “Too Little Too Late”. She dropped two albums in her early years which charted globally, JoJo and The High Road. On top of that, she launched her acting career making her name known in the likes of Aquamarine and RV. Things then started to die down as her record label refused to release a third album, even though JoJo kept sending completed LPs their way, and so she released Mixtapes instead to get her music out into the world, with the likes of Can’t Take That Away From Me and Agápe. She also appeared in the film G.B.F. and guest-starred in House of Glam and Hawaii Five-0. After a lawsuit struggle to get out of her contract with the record label that wouldn’t release her third album – which she went into detail about in a candid interview with UPROXX, she was finally able to officially release music signing with Atlantic Records, which is where we got her tringle, which were “When Love Hurts“, “Say Love“, and “Save My Soul“, as well as two EPs, before starting her third era which saw her release the “F**k Apologies” featuring Wiz Khalifa, “Music.”, “FAB.” featuring Remy Ma, and her third album Mad Love. Away from Atlantic Records and in response to her first two albums not being available on download and streaming sites, JoJo re-recorded those two albums and the singles “Disaster” and “Demonstrate” and made them available for us all to download and stream releasing on her own record label Clover Music in connection with Warner Bros. Records. This year, JoJo geared up for the release of her new album good to know by dropping new singles “Man” and “Lonely Hearts”, which follows up the previously released singles “Joanna” and “Sabotage”; and the new album showcased to the world what we’ve been missing all this time, and she later followed it up with an acoustic version and a deluxe version of the album. We also managed to interview her about her fourth studio album, exclusively on CelebMix. She’s also set to release her debut Christmas album towards the end of this year. 2020 has so been JoJo’s year!

According to Spotify, the single “Slow Motion” has been written by Lindsey Lomis and Ryan Daly with the latter producing the track. An accompanying music video for the song was released on 16 October 2020.

This is one perfect collaboration as both artists are capable of incredible runs. Their voices compliment each other brilliantly, so much so that one doesn’t outshine the other – which usually happens on these sorts of tracks. The soul-feel to the song is deep, with the self-care message running behind the lyrics hitting the listeners hard. This is one track we could listen to on repeat for weeks.

The music video starts off with Lindsey Lomis in the dining room of a grand house where she gets up and moves to the hallway where a drummer is playing behind her. Soon enough, JoJo descends the staircase for her part of the song, whilst Lindsey Lomis is in the lounge. We later watch as both artists step out to the pool area where a guitarist is playing on the edge of the pool. The video then reverses in a slow but fast-rewind way as we re-watch the scenes backwards.

In The Madness EP

The awesome song, “Slow Motion”, appears on Lindsey Lomis’ brand new EP, In The Madness. This marks her first EP release on Altadena and Warner Records, following her debut EP release, Chapter I. At just 17, Lindsey Lomis is making a name for herself and proving to be a force to be reckoned with in the music industry.

The In The Madness EP allows Lindsey Lomis to shine in every single way. The six-track EP showcases her soulful R&B-influenced vocals as well as her versatility within her music.

“Music is the one thing that really helps me process the chaos and connect with other people,” she says in a press release. “I hope this EP allows my audience to simultaneously acknowledge the craziness of the world while also finding the joy within it. These songs will make you feel something; they are the hopeful light—the magic in the madness—that we all need right now.”

In The Madness EP is a treasured collection of tracks, with “Music In The Madness” and “Bones” showing off her soulful bluesy voice making us believe every single word, whilst “Feel” delivers an upbeat pop number that stands out like no other. There are two brand new tracks on the EP, “Into You” and “Do You See Me?”, both come straight from her heart and we can hear the emotion and passion she’s delivering in both tracks. In the middle of the EP is “Slow Motion” which really allows her to shine with her vocal runs with JoJo helping to emphasise them with her own vocal runs.

Prior to the release of the collaboration with Lindsey Lomis on the song “Slow Motion”, JoJo dropped the incredible single “The Change” that we keep on listening to over and over again as it is such a brilliant song.

This track is highly relatable to many and every listener can feel the impact of these lyrics. It has to be one of JoJo’s best single releases to date, with her voice completely on point throughout. The track was written by Diane Warren and produced by Nicky Davey, with it becoming the campaign song for Biden/Harris.

Full of self-care, self-belief, and self-empowerment, “The Change” is deciding to make a change in yourself, to be more positive, to be the light in the darkness. Starting from the inside-out. JoJo’s incredible vocals encompasses the listeners and allowing them to believe in themselves more and to make a change for the better, for themselves.

“The Change” is also available to download and stream right now, via Warner Records Inc.

What do you make of Lindsey Lomis’ single “Slow Motion” featuring JoJo? Let us know on Twitter @CelebMix, and tell us your thoughts on her new EP In The Madness and JoJo’s single “The Change”.