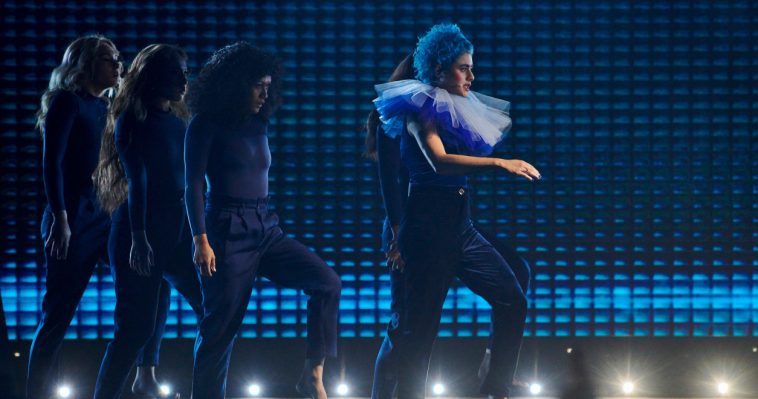 Australia’s national selection show for Eurovision, titled Eurovision – Australia Decides, took place on the night of the 8 February (well the morning of the 8 February for all the Europeans that tuned in), and Montaigne came out on top with her infectious song “Don’t Break Me”. She’ll be sent to the other side of the world, to Rotterdam, the Netherlands, this May to compete in the Eurovision Song Contest 2020.

This is the second year of Eurovision – Australia Decides, with last year’s show crowning Kate Miller-Heidke with her song “Zero Gravity”, to which she opened this show with. It was hosted at the Gold Coast Convention and Exhibition Centre by Australian Eurovision commentators Joel Creasey and Myf Warhurst. As well as showing on Australian broadcaster SBS, it was also live-streamed on the SBS Eurovision Facebook page.

Montaigne went on to win the show with her awesome song “Don’t Break Me”. She topped the jury vote with 54 points but came second in the televote, scoring 53 points, coming out on top with 7 points ahead. The jury consisted of John Martin, Kate Miller-Heidke, Måns Zelmerlöw, Milly Petriella, and Paul Clarke.

Real name Jessica Cerro, she took the name Montaigne after being inspired by the 16th-century philosopher and essayist Michel de Montaigne. She dropped her debut EP in 2014, followed that up with a debut album in 2016 titled Glorious Heights – which charted on the Australian album charts at number four, and hit it big in the same year by being featured on Hilltop Hoods’ song “1955” along with Tom Thumb – which charted at number two on the Australian ARIA singles charts. Her sophomore album, Complex, was released last year, charting at number 19 on the album charts in Australia.

We aren’t, at all, surprised that Montaigne won, her performance was fierce with on-point vocals throughout. She 100% delivered on the night and it was brilliant to watch and was definitely a feat above the rest. The song takes on an emotional vibe whilst the beat has a current Eurovision feel. She’s definitely going to be one to watch come May.

Casey Donovan came second with her awesome ballad “Proud”, where she topped the televote, but came third in the jury vote, hitting 100 points, just seven short. It was a good strong powerful performance and we truly believe she would be amazing singing The Greatest Showman’s song “This Is Me”. It really was filled with passion, and we hope to see her return and give it another shot another year.

The same goes for third place Vanessa Amorosi, who is actually an international superstar and became massive in the late ’90s / early ’00s, and she certainly deserves so much more credit. Her song was “Lessons Of Love” and it was fierce, sexy, strong, and passionate. There was literally nothing more she could’ve done. She came second in the jury vote and third in the public vote, totalling at 82 points.

Fourth place went to Didirri with his aesthetically pleasing and gentle “Raw Stuff”, fifth place was given to Mitch Tambo with his English and Gamilaraay language song “Together”, and in sixth place was the Taiwanese-Australian singer Jaguar Jonze with her rock-inspired song “Rabbit Hole”.

The Voice season eight winner Diana Rouvas came seventh with her song “Can We Make Heaven” and Australia’s Got Talent season five winner Jack Vidgen came eighth with his self-love song “I Am King I Am Queen”. Ninth place went to singer and actor (he was in The Great Gatsby and Mad Max: Fury Road) iOTA with his song “Life”, and in tenth place was Jordan-Ravi with his busker-themed song “Pushing Stars”.

The interval also gave us some brilliant performances, first off we had Måns Zelmerlöw bring it on-stage with his Eurovision 2015 winning song “Heroes”, which was followed up with Dami Im gracing the stage and singing her brand new single “Marching On”. Dami Im also made the HUGE announcement that she will be submitting a song to compete in Eurovision – Australia Decides 2021. The other contestants better watch out, will she go all the way and snatch her rightful Eurovision crown? We’ll have to wait and see.

Then both acts returned for an amazing collaboration on the song “Walk With Me” (which is originally by Måns Zelmerlöw and Dotter, the latter of which has made it into the final of Melodifestivalen 2020). Jon Ola Sand also made an appearance to announce that the votes have been counted and verified.

We’re so glad Montaigne won with her awesome song “Don’t Break Me”. It is now available to download and stream across all platforms, along with all the other songs that were performed in the national selection show.

Australia has been doing really well in the Eurovision Song Contest since they debuted in 2015. The closest they came to winning was with Dami Im when she came second with her song “Sound Of Silence”. Last year, Kate Miller-Heidke performed “Zero Gravity” with an amazing staging that had us all glued to our TV screens; she came ninth with 284 points. We can so see Montaigne doing even better – she’ll need to beat the other 40 countries’ acts to win.

The Eurovision 2020 acts that have been announced so far are Blas Cantó for Spain, Hooverphonic for Belgium, VICTORIA for Bulgaria, Sandro for Cyprus, Vincent Bueno for Austria, Arilena Ara for Albania, Tornike Kipiani for Georgia, Jeangu Macrooy for the Netherlands, Vasil for North Macedonia, Tom Leeb for France, Benny Cristo for the Czech Republic, Eden Alene for Israel, and Stefania for Greece. The remaining countries are expected to reveal their acts in the next couple of months.

What do you make of Eurovision – Australia Decides winner Montaigne and her song for Eurovision 2020 “Don’t Break Me”? Let us know on Twitter @CelebMix.