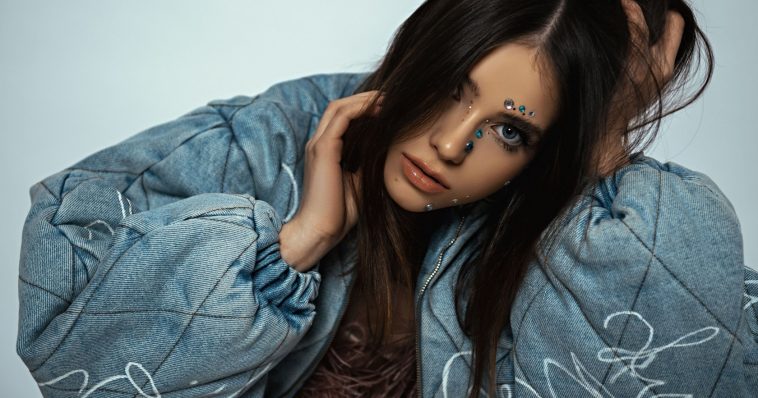 After two years of failing to make it through to the Grand Final of Eurovision, Romania has decided to go down the internal selection route for an artist, teaming up with one of the biggest record labels in the country, Global Records, and eventually choosing the quickly-rising star, Roxen. Eurovision songwriting camps were created to find the right song for the Romanian act, and five of the songs will be presented in a national selection show.

Roxen, real name Larisa Giurgiu, is a 20-year-old Romanian singer who is currently making her name known in her home country having been featured on SICKOTOY’s song “You Don’t Love Me” which skyrocketed up the Romanian charts and peaked at number three. Her follow-up solo debut track “Ce-ti Canta Dragostea” also did well on the charts, peaking at number 26. She also followed that up with the track “I Don’t Care”.

Her vocals are sweet but gorgeous and full of spirit, like no other singer that we can think of. Her style and looks have us thinking about Dua Lipa and Antonia but her voice has a memorable quality to it, so much so that you can identify it’s her when she’s singing.

Although she hasn’t got many releases to her name, it’s clear she’s definitely one to watch in the next few years, especially in Romania, and representing the country at Eurovision will give her the international fame she clearly deserves.

Talking about being the Romanian representative at Eurovision 2020, Roxen said: “As a child, I participated in various competitions and festivals. I have always dreamed of making high-quality music, performing on the most important stages and in front of the largest audiences. Now I am just so excited, I feel I am facing the biggest test in my career, totally out of my comfort zone. I love the feeling, as I have always been attracted to new experiences, to all the challenges in my life. I am happy and grateful for this opportunity. At the moment, all my energy and focus goes towards Eurovision – I want to do my best for this!”

Prior to 2018, Romania had a 100% success rate since the Semi-Finals were introduced at Eurovision in 2004, with yodeller Ilinca being the last representative to qualify for the Grand Final, with her awesome song “Yodel It!” which featured Alex Florea, which came seventh with 282 points; it is their best placing since 2010 when Paula Seling and OVI came third with the song “Playing With Fire”.

Everything changed in 2018, when The Humans failed to make it to the Grand Final with the song “Goodbye”, just missing out on qualifying by coming 11th. Then in 2019, Ester Peony was chosen to represent the country and only came 13th in her Semi-Final. It’s no surprise the broadcaster, TVR, decided to change their selection process since clearly national selection for artist and song wasn’t working out for them. Can Roxen change Romania’s recent bad luck and actually make it to the Grand Final this year? We’ll find out in May.

The Eurovision 2020 acts that have been announced so far are Blas Cantó for Spain, Hooverphonic for Belgium, VICTORIA for Bulgaria, Sandro for Cyprus, Vincent Bueno for Austria, Arilena Ara for Albania, Tornike Kipiani for Georgia, Jeangu Macrooy for the Netherlands, Vasil for North Macedonia, Tom Leeb for France, Benny Cristo for the Czech Republic, Eden Alene for Israel, Stefania for Greece, Montaigne for Australia, Samanta Tina for Latvia, Diodato for Italy, and Destiny Chukunyere for Malta. The remaining countries are expected to reveal their acts in the next couple of months.

What do you make of Roxen representing Romania at the Eurovision Song Contest 2020? Let us know on Twitter @CelebMix.