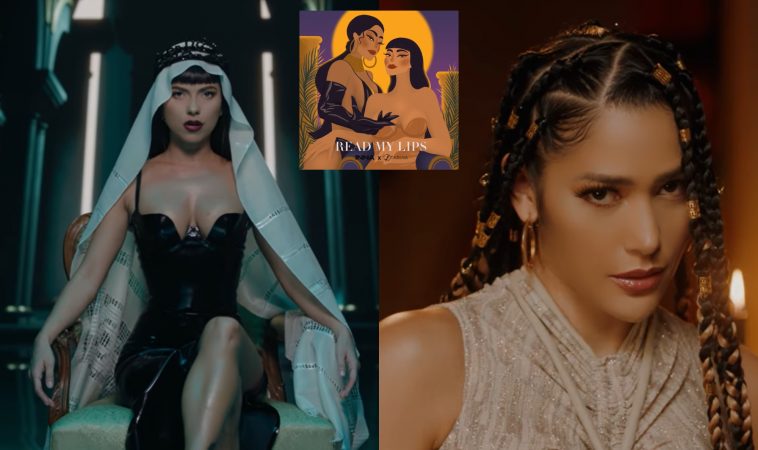 We have another single release from INNA, titled “Read My Lips” and it sees her hit the dance-reggaeton style by having Farina feature on the song. This isn’t the first time she’s dipped into this style of music as she’s previously collaborated with Daddy Yankee on “More Than Friends” and “We Wanna”, the latter in collaboration with Alexandra Stan. This song follows up INNA’s collaboration with Minelli on the single “Discoteka” and Farina’s feature on the remix version of J Álvarez’s single “Sentimientos Escondidos” alongside Rauw Alejandro, Lyanno, and Andy Rivera.

INNA, real name is Elena Apostoleanu, is one of the biggest Romanian female artists around at the moment, having gone on to have international success with her early singles such as “Hot”, “Amazing”, and “Sun Is Up”. She continued her success with a variety of singles that have hit over 100 million views on YouTube including “Ruleta“, “Gimme Gimme“, and “Heaven“. She has collaborated with some of the biggest artists and DJs including Flo Rida, Pitbull, J Balvin, Daddy Yankee, Martin Solveig, Sak Noel, and Dannic, to name a few. Last year, she dropped her sixth studio album, YO, which saw her take creative control, spawning the singles, “RA”, “Iguana”, “Sin Ti”, “Tu Manera”, and “Te Vas“. We also managed to speak to INNA in an exclusive interview about the album. Now she’s working on a new era with the release of “Bebe” with Vinka, “Not My Baby”, “Sober”, “Nobody”, and “Discoteka” – with Minelli, as well as collaborating on Yellow Claw’s track “Baila Conmigo” with Saweetie and Jenn Morel, and releasing “VKTM” in collaboration with SICKOTOY & TAG. We also expect the third issue of INNAMag after she released issue one and issue two last year. Currently, she can be seen as a judge on Pro TV’s The Masked Singer Romania.

As for Farina, full name Farina Franco, she is a Columbian reggaeton singer who is non-stop rising in the Latin music world. In 2017 she signed to Jay-Z’s label Roc Nation and is currently signed to Sony Music. She’s gone on to work with some of the biggest artists in various genres, including Thalía, Wyclef Jean, Steve Aoki, Maluma, Sofia Reyes, and Tinie Tempah. Her collaboration with Maluma, titled “Así Así” is her most streamed Spotify track, at 14 million streams. She’s definitely someone to watch as she continues to make waves in the music industry.

According to Spotify, this song has been written by Britt Burton, Elsa Curran, Farina Pao Paucar Franco, Lilian Caputo, and Sean Fischer, with French Braids and Alexandru Cotoi acting as producers of the track. As for the music video, because the artists are in two separate countries, it was filmed by two different teams, NGM Creative for INNA and NJ Entertainment for Farina, with Bogdan Paun listed as the director for INNA’s visuals, and Jhon Nael and Jhonatan Abraham listed as directors for Farina’s visuals, whilst Alexandru Muresan and Jared Pimienta acted as directors of photography, respectively. The video production comes from Loops Production.

In a press release for the song, INNA said, “Really excited to share ‘Read My Lips’ with my fans and very grateful for having Farina onboard. She’s a super artist, my Latino girl. Let’s get this party started!”

In the same press release, Farina added, “It’s a huge achievement for my career to have a collaboration with INNA, the queen of dance. She is a true inspiration – her voice, her music, her lyrics. She is also a style icon and I’m happy to be part of ‘Read My Lips’.”

Watch The Music Video To “Read My Lips” By INNA Featuring Farina Here:

It’s great to hear INNA dip back into her pure pop-dance tracks as “Read My Lips” feels like it is already a part of her back-catalogue, almost as if it is a part of her unreleased songs from her Hot, Party Never Ends, or INNA eras, however, it has majorly been switched up with Farina’s reggaeton sound. Both artist’s vocals are on-point but we’re slightly disappointed at the overall sound of the song as it feels like this isn’t the best song for these two artists, with Farina’s verse disjointing the track, making it seemed forced. Regardless, both artists bring it throughout “Read My Lips” and we’re sure this track will grow on us all.

The music video is extremely high quality with goddess themes and Mad Max vibes running throughout. Some scenes make it feel like a soundtrack music video with plenty of desert sand visuals which certainly makes us think of Mad Max. Both artists bring stylish goddess-like outfits to the video, with Farina more on the provocative side. The intercut scenes also show dancers going all-out for their choreography. It’s one high-production visual that feels like it’s been taken from a film.

“Read My Lips” is available to download and stream right now, via Global Records.

What do you make of INNA’s new single “Read My Lips” featuring Farina? Let us know on Twitter @CelebMix.